We caught a Virgin flight from London Heathrow to Dubai International Airport. A taxi then took us to the Sheraton Hotel in Dubai Creek.

The Sheraton was lovely, with a beautiful foyer and our room had great views across the creek to the city. When it was clear we could see all the main sky scrapers. When it was hazy we could watch the boats lined up in the creek.

Day One: David was working, so I decided to try and find the Gold Souk. I don’t speak any Arabic, so was nervous about using public transport on my own, so I wanted to visit somewhere I could walk to.

This was also my first visit to a muslim country, so I was unsure of what was appropriate. I asked the concierge, who assured me that I did not need to cover my head unless I planned to visit a mosque and my dress (long sleeves, high neck line, long skirt) was sufficiently modest. She said I was safe to walk around on my own but it was very hot so most women didn’t walk.

I set off, armed with a map and an iphone which I didn’t know how to use. The hotel was right next to the creek so for a while I was distracted by all the boats unloading. It was hugely interesting to watched relatively small boats which were stacked high with everything from plastic chairs to washing machines. It was amazing that some of them had made it across the sea, they seemed much too heavily laden.

There were also lots of men. While I was staring at the cargoes, they were staring at me. It felt uncomfortable so I moved on.

I found a shopping area on a main road. Stopped to look at small supermarkets and shops selling plastic shoes and cheap handbags. All the other women were wearing black abayas (long cloaks that cover other clothes) and despite the heat, I was tempted to do the same, as I found all the men stared at me and I didn’t like it.

Found a cheap clothes shop and bought a long black tunic and hijab (black headscarf.) The tunic was fine but I didn’t know how to tie the hijab and my attempts looked silly (I looked more like a washer woman from a child’s story book!) I would have asked a random woman in the shop but no one seemed to speak English. Decided to wear it anyway. If I had found a full burqa I would have bought one. I love the thought of being able to hide. Would have been great for the school run when the children were young or for nipping to the shops in pyjamas.

Lots of the shops had interesting textiles and fancy shaped coffee pots. There were also lots of mosques. Whatever your religion, you cannot deny that mosques are pretty. I once read that the castle in Disneyland is based on a mosque, and I can see why.

I found the area where my map showed the gold souk should be, but I couldn’t see it anywhere. Tried to find someone who spoke English. Failed. Then spotted a small shop where they took in sewing, run by Chinese people. I went in and asked if they spoke mandarin, which they did. Excellent (Note, if, like me, you are not very good at learning languages, learn mandarin. It is the only one you need. There are Chinese people in every country I have ever visited.) They said I was actually right next to the gold souk but at the back. They pointed out how to find the entrance.

I looked around the souk. Window displays full of gold. Also, a lot of dodgy looking men suggesting I might like to follow them to buy a fake watch or designer handbag. I didn’t. The whole souk seemed to have only men in it. Some wore European style clothing, some wore traditional white thobes (Arabic dress.) I saw very few women and they seemed to all be wearing full burqas and escorted by men. 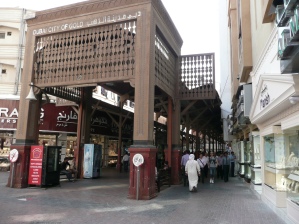 Left the souk and tried to find my way back to the hotel. Got thoroughly lost. Found a tiny spice souk. A very friendly man (who spoke excellent English) showed me round. It smelt wonderful and was very interesting. I thought about buying some frankincense (just because I had never seen it before.) Didn’t. Then spent the rest of the trip wishing I had and also knowing I would never be able to find my way back again. 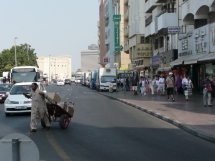 Continued to be lost for some time. There were lots of people, so I wasn’t worried, it felt safe. Found a main road. It was busy, full of cars and also a man pushing a hand cart. Found the waterfront. It was beginning to get dark. 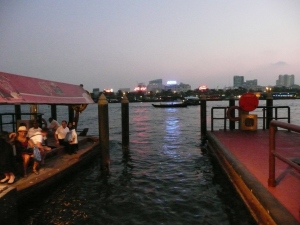 There was a call to prayer. It drifted across the water, a lovely sound I thought. All the men stopped their activities and knelt on little prayer mats to pray. I didn’t see any women praying and wondered why.

I realised I was at the wrong waterfront, this was not the creek where my hotel was. Felt slightly concerned that maybe women are not supposed to walk around after dark on their own. Managed to find someone in a shop who spoke English and got directions. Returned to the hotel unscathed.

David finished work. We had dinner in the hotel, then got a taxi to the main part of the city. Saw the sky scrapers (but I think you had a better view from our hotel.) Went to a shopping street and I bought a cushion cover for my collection. Also bought some gifts and a weirdly shaped tea pot. I bought a white throbe and a ghutra (checkered headscarf) and egal (black rope you tie scarf with) for the dressing up box at home.

Day Two: David didn’t have to work so we got a taxi to Royal Mirage Hotel for breakfast. It was beautiful.

We walked around a bit. It was very pretty, very clean (and very ‘fake’.) There was even a souk, but a rather sanitised version of the ones I had visited (and a lot more expensive.)

We had an extremely nice breakfast sitting on an air conditioned balcony.

We left via the main reception area, which had the darkest black men I have ever seen, dressed in costume opening car doors as they arrived. I asked if I could have my photograph taken and they were very friendly. I wonder if they mind that their job is just opening doors for rich people and being looked at as a novelty. Maybe they are just happy for the money or are students doing it temporarily. I hope so.

Went back to our hotel. Drove via a beach which we went to look at. Not allowed to take photographs because of modesty laws.

We had arranged a trip through the hotel with Arabian Adventures (arabian-adventures.com ) and were going to see the desert. We were advised to wear sturdy boots for walking on the sand and trousers for when riding on camels. Very exciting!

We were collected from the hotel by a silver 4×4. We then drove to two other hotels and collected other tourists, before driving off to the Dubai Conservation Desert. We then met up with several other Landrovers, all identical. They stopped and changed the tyre pressure, then we set off.

First we were driven to a small camp where we watched a falcon display. Then we were taken for a short camel ride. Great fun.The key advice would be, lean back hard when they stand up. Camels really stink. They also had mouth guards, so I am guessing that they bite. My children will be pleased to learn that I do not wish to ever own a camel.

Then we went ‘wadi bashing’, which basically involved driving very fast across the dunes. It was not unlike being on a roller coaster. I was grateful for the seat belts and roll bars, not that we needed the latter. One man felt car sick, which added a little tension to the trip.

We stopped to take photographs of the sunset. I think it is the most beautiful thing I have ever seen. The whole desert seemed to change colour as the sun dipped.

We then drove to a camp. It was lovely, all set up in the style of a beduin camp. We sat on cushions around long low tables and watched belly dancers in the candle light. We were then given a shisha supper, which was delicious. Although we didn’t know anyone else, there was a lovely atmosphere and people chatted and were very relaxed (perhaps it was sharing the common bond of not being sicked on by the poor travel sick man!)

Finally, we were all returned to our hotels.

An excellent day from start to finish.

2 thoughts on “Two Days in Dubai”