Husband went into office, I worked in hotel room, putting through the changes my editor had suggested for my book, Hidden Faces. When I needed a break, I stood on the balcony and absorbed the sea and palm trees. Not bad at all. 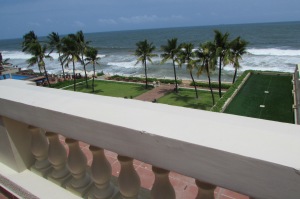 Went for a fast walk along sea front. Lots of families, groups of boys in white tunics walking home from their Madras, street vendors, stray dogs sleeping in the sunshine. There’s a big Buddhist festival over the next three days and they’re decorating the streets with giant lotus flowers and lights and flags.

The weather goes from bright sunshine to complete deluge in a flash, you can watch the storms coming in across the sea. There are signs up warning people not to swim because of dangerous currents and poisonous fish. Booked trip to see elephants tomorrow.

We were both ill. Food poisoning. Ghastly. Cancelled trip to see elephants. But at least we both had it at the same time, so only lost one day of holiday. Annoying because I have been very careful, drinking only bottled water and eating only hot cooked foods. Makes you thankful for toilets.

If we stood still, even for a second, a man would emerge from nowhere, always wearing an open necked shirt, and asked where we were from and would we like a tuktuk, a tour or a cup of tea.

We passed several booths decorated with lanterns and sculptures – I think for the festival, it looked like it might be a competition. Saw a tiny old lady sweeping. Husband raised his thumb at her, told her the booth was “very good.” She smiled at him, no teeth, scant hair, ragged clothes, but a beautiful smile. Her whole face lit up. Precious moment.

Looked round the old Dutch hospital – now a complex of gift shops and cafes. The shops were closed for the festival, so I couldn’t buy a cushion cover. And I could see them through the door. So close…..

Got a tuktuk back to the hotel. Agreed price beforehand (very important) but when we arrived, he said he had no change and gleefully showed us his empty wallet. Husband said it wasn’t a problem and he could wait while husband went into the hotel and got some change.

Had a drink in the bar, under ceiling fans. Watched crows stealing food from the buffet. Listened to them screech while the sea bashed against the beach and the wind stirred the palm trees. Worth coming.

Got a tuktuk to Pettah region. Here they have a station and streets of market stalls. A rabbit warren. It was one of those experiences that feels scary but actually, as long as you kept your wits about you, it was just interesting. The people wanted to sell us stuff (at inflated prices) not murder us.

Hunted for a cushion cover. Not easy with no local language. Tried miming and got shown lots of bedding and pyjamas. In the end I bought some fabric, very ethnic, will make cushion cover when I get home. Then we went to a leather goods stall – lots of shoes and bags and poofs. Husband rather keen on a poof made from buffalo skin with elephant design. Assured me it would make a good (if rather large) cushion. He bargained with the seller and bought it. Lots of smiles all round.

Seller than offered to sell husband “a better tee-shirt”, which I thought was hilarious but husband found less amusing. Walked back to hotel along sea front. Loads of people again, all very happy. We are the only white people. I like it here.

Tomorrow we hope to go and see elephants….. 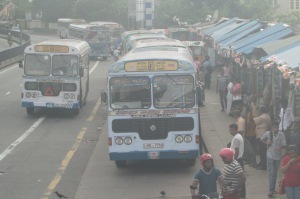 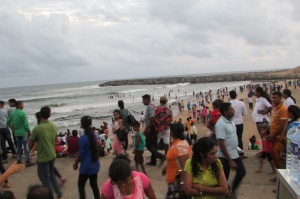