Well, when I went to feed the birds this morning, there, wandering around the aviary was mother hen with six chicks. They are so cute, at that fluffy, long-legged stage. They look like the fluffy chicks we made from winding wool around donut-shaped cardboard when we were children—did you ever do that? You know, the pom-poms that your mum tells you to make when you’re 8 years old and bored because it’s rained for twenty days in a row.

Anyway, they all look very healthy. I tried to take photos for you, but the sun is too bright, so they’re fairly hard to see.

Chicks won’t manage to eat the pellets I feed to the full-grown birds, so I went to get some chick crumb. As soon as I put it in the cage, on a little plastic saucer, the mum kicked it everywhere. The chicks then scurried around, picking each crumb from the dirt. I got them some water, because the big water pot will be dangerous (they could drown in it) and is now up on a log, so only the big birds can reach it.

Then I started to clean out the nest. Once a hen has left the nest, she won’t go back in there while there is dirty hay or egg shells. There were two unhatched eggs. One had a chip in it, so I unpicked a bit more, and it started to cheep. I pulled off some of the shell, to reveal the unhatched chick, which was wriggling and cheeping. I guess it was just a late hatchling, and the others were ready to move off the nest, so the mother abandoned it. It seemed a shame to not give it a chance. It is a warm day, I covered it with hay in the hope it wouldn’t dehydrate too much, and have left it. It has two chances. I’ll let you know on Monday if it’s still alive.

(My daughter told me this was a revolting photo, so look away now if you’re squeamish!)

I gave the cockerel some corn, as a treat, finished cleaning the cage, then left them to it. The mother had sat in a sunny spot, and all the chicks were under her. I do hope they survive. (I also hope—though I know it’s unlikely—that none of them are cockerels!) 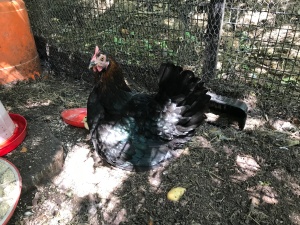 I will post another blog on Monday.
Take care,
Anne x

(By the way, the egg-shaped things that look like potatoes in the photos are…potatoes. Don’t ask.)