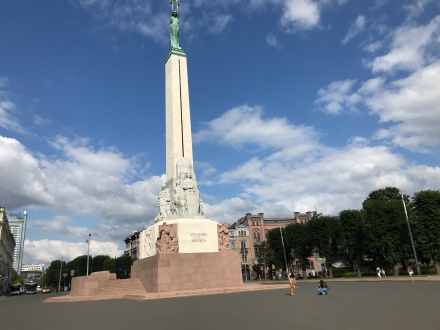 Riga in the Summer

Riga is the capital city of the little country of Latvia, and I visited it last week, when Husband was working there. I have never visited Latvia before (I am loath to say that I didn’t even know that Latvia was across the Baltic Sea from Sweden, between Estonia and Lithuania—because that makes me look ignorant!)

Latvia has had a chequered history, belonging at different times to Sweden, Germany and Russia, and more recently being part of the Soviet Union. I had no idea what to expect from the city, but “ex-Soviet Union” musters images in my mind of austere buildings and ugly sculptures; so the pretty architecture and sunny parks were a pleasant surprise (I’ll mention the sculptures later…)

We arrived on Friday, and caught a taxi from the airport. A word of warning here: Taxis in Riga have their prices printed on the outside of the rear door, and there is quite a lot of variation in the price/km charged. There doesn’t seem to be any regulated pricing or official taxi rank at the airport. We chose a taxi with a similar price/km to others we could see, and set off. Husband (who notices these things) realised that the price that was showing on the metre, did not tally with the price displayed outside; you need to keep an eye on what you are being charged. (However, whilst this might be useful information, I have no idea what you do with the knowledge. Next time I am in Riga, if the taxi driver has an over-priced metre, I do not feel inclined to confront him and be dumped in an isolated spot with no transport. But at least you’ll know if you’re being ripped-off and can withhold the tip!) Note, we were later informed by the hotel that we had paid an inflated price. The red taxis (Red Cab) and the lime green taxis (Baltic Taxis) are much cheaper, and cost about .70/km (not 1.99/km, which is what we paid). They park slightly further away from the main exit door at the airport.

We were staying in the AC Hotel, which is an easy walk from the old town. It was okay—I’ve stayed in prettier hotels, and the rooms were as tiny as New York hotel rooms (ie they fitted a bed, but not much else). However, at about £80 a night, it compares to staying somewhere like a Premier Inn on price, and it was much nicer than that! 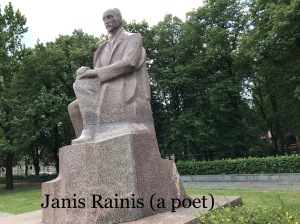 We set off for a walk to the old part of the city (about 15 minute walk). There was a park, complete with a river and bridges, and outside cafes. There were also lots of people on scooters. These can be rented (information according to Husband, so might be rubbish) and are left and found in random places around the city. They whoosh past you at unexpected times, and must, I imagine, be uncomfortable on the cobbled streets, but they were popular. Very popular.

The park also gave us our first taste of Latvian sculptures, which were as bad as I’d feared. They mostly have the whole cubist-looking Soviet Union chunky-art look. Apparently (read the guide book afterwards) many were put up during the Soviet rule, and many of the ones honouring Soviet people have since been removed. But the ones of famous Latvians remain, staring grimly at tourists, reminding us that the city has not always been a happy place. (Apologies if you actually like the style of Soviet sculptures, perhaps it’s an acquired taste. Everyone looks like Stalin to my eyes.) We did see some more pleasing sculptures, but the dominant ones were very ugly.

We found the Freedom Monument (called Milda—not sure if that’s her real name) and a woman was busking. During Soviet rule, there was a large statue of Lenin facing the monument, and people were not allowed to place flowers on the monument. Leaving flowers on monuments seems to be a thing in Latvia.

The main street through the old town is pedestrianised, which was good, as although there are crossings at the other roads, you are supposed to wait for the lights to go green, and they took hours. Latvians are very obedient about this. All the streets seem to be cobbled, which is probably helpful in the winter, when there’s lots of snow, but means you need to leave your heels at home.

We had coffee and beer next to the Powder Tower, which used to hold gunpowder and is now the war museum. Riga has a lot of museums. The outside of this one is interesting, because you can see cannon balls embedded in the walls, from an ancient battle.

Found ‘Cat House’. This was owned by a merchant who was told he couldn’t join one of the guilds, as it was only open to Germans. He placed two cat statues on his roof, with their tails raised, and their bottoms pointing towards the guild! Later, when the guild finally accepted him, he changed the cat’s position, but they are still on the roof. Many of the souvenirs in Riga have cats on them. 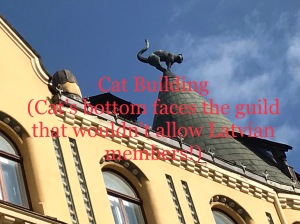 We walked back to the hotel, past lots of churches (Riga has a lot of churches) with scooters whizzing past us, watching our footing on the cobbled streets and waiting many hours at the pedestrian lights.

Riga is very pretty, especially when the sun is shining. I will show you more tomorrow–why not sign up to follow my blog so you don’t miss it?

A laugh-out-loud book about travelling the world with a family. From India to South America, and across most of Europe, this book has been described as “The Durrells meet Bill Bryson”!

If you enjoyed this, why not read The Sarcastic Mother’s Holiday Diary?

Available from an Amazon near you…free if you have a Kindle. A travel diary to make you smile. Buy your copy today.

2 thoughts on “Riga in the Summer”