Husband works with the husband of someone who organises the Chelsea Flower Show, who kindly gave us tickets. Very exciting! I have always wanted to go, the weather was perfect, so off we set. Some worry over the dress code – looked at Google images and everyone seemed smart, so we decided jeans were probs not the thing to wear. (Actually, it wouldn’t have mattered, there were a whole range of outfits.)

The tube station was shut, so we walked from Victoria station. I wondered if there’d be loads of security, as the Manchester bombing was so recent, but it was fairly low key, and certainly didn’t spoil anything. Nor did we get attacked (which would have spoiled it more).

The show was good – but not what I was expecting. I have seen telly programmes about some of the gardens, and I thought we would walk past about 40 little gardens, all with different themes. There were actually very few. Not sure if this is because we didn’t pay £10 for a map, and so we missed them, or if there are only about 10 gardens each year. The event is sponsored by M&G Investments, and their garden won (which I thought was rather funny!)

The main impression is clever. The gardening is very very clever. Each one looks as if it has been established for several years, with mature trees, wild flowers growing between paving stones, everything carefully planned. There are also lots of people. Millions of them. It’s hard to get photos of the gardens without several stray arms and ears in the frame. After a while, I stopped photographing flowers and started to photograph the people. I could make up whole stories for some of them. Most women wore flowers: flowery skirts, flowers in hats, flowers attached to hair combs. If you stood still and listened, there was a whole symphony of sneezing.

We didn’t see many gardens, but we did see lots of stands selling interesting garden related stuff. If you like garden centres, Chelsea Flower Show will be paradise for you. Husband got rather side tracked and somehow managed to buy a shed when I wasn’t looking. He kept wandering off and talking to people – there were lots of people to talk to, guides who could tell you about the gardens or direct you to the pimms stall.

I liked the inside arrangements. We found the dahlia stand (my Dad grew dahlias) and they were all perfect. We found a display of potatoes, and a stand with carnivore plants. All the flowers were straight stemmed, fresh blooms, bright colours. Not a nibbled leaf in sight.

It was all very clever. But it wasn’t very real. I guess people don’t want to pay to see real English gardens. Next year, Husband is going to pay (£8,000) for a stand (apparently). He is going to represent a real garden – with weeds and slugs and flowers that are a bit squashed. He will sit in the middle in a deckchair with a handkerchief on his head. Perhaps I will incorporate a dead bag of decapitated birds to complete the image. We’ll call it “Gone to Seed”. Do look out for us if you visit….

Okay, brace yourself for a few fuzzy photos taken on ancient phone:

This is my favourite garden. 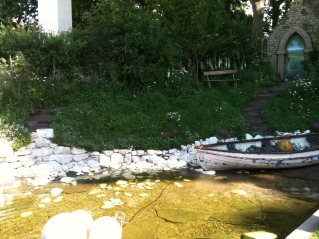 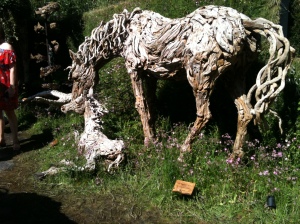 Some cool sculptures you could buy. If you are rich enough.

Animals, which looked cute, but were just covered in fake grass, so I didn’t really see the point of them.

Parking was a problem.

Dahlias – some of which were as good as the ones my Dad used to grow.

2 thoughts on “Going to Seed at the Chelsea Flower Show”