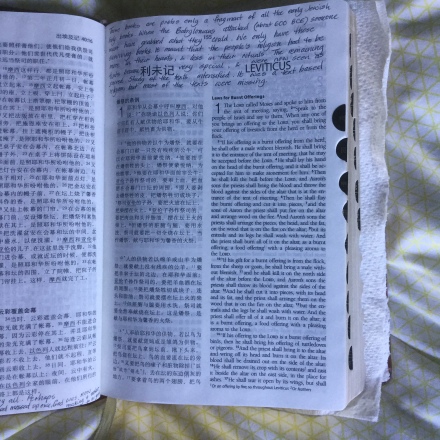 Often, as I read the Bible, I come to a passage which makes no sense. Something happens, there is a reaction to it, and you are left wondering why. In the olden days (of not so long ago) people would have heavy tomes sitting on bowed bookshelves, and would pull down a version of their favourite commentary to investigate. Today we have Google.

However, the problem with Google, is that usually, you have no idea who has written something. Sometimes it’s difficult to know if someone is giving their own opinion, which is no more valid than your own, or if they are Biblical scholars and know what they’re talking about. And they write with so much authority!

Take a passage I read recently (as part of my task of reading through the whole Bible – which is taking me months). I read an account of King David, before he died, telling his minions to take a census of Israel and Judah, because he wanted to know how many people he ruled. (End of 2 Samuel.) This makes God angry, and there is a plague, which kills thousands of Israelites. Why? What is wrong with a census? I put the question into Google, and came up with dozens of results.

Several people said the problem was David’s reasons for taking the census, that it showed pride in his own achievements. Some people suggested that the problem was lack of trust, or wrong priorities – David was more concerned with how many people he ruled than what God wanted. All sounded very plausible, and were more or less what I’d decided myself.

Then I read another explanation, posted on a website called “gotquestions.org”. They came up with a different reason for the census being wrong. They said that in Exodus 30, God had clearly said that no one should take a census of Israel, because Israel belonged to God, and only he could instigate one (as he did when the book of Numbers was written). When the people were counted, they had to make sacrifices, showing that they belonged to God.

So, the reasons for the census (pride, wrong priorities, etc) weren’t the problem. Taking the census in the first place was.

Again, there were lots of answers online, people saying that actually it was God, who allowed Satan to incite David. Or saying that Satan was not a Hebrew word, and that is where the problem lies. However, scholars who actually know some Hebrew point out that actually, the verb ‘to incite’ has no subject in the original text. So it is better translated, “There was who moved David against them,” – which doesn’t make sense. So English translators added what they thought was best. Which means that to be definite in our interpretation of the English translation is foolish. There are, it seems, a lot of foolish people out there.

Which actually, is my point (I know, you were wondering if I had one!) The reason the title mentions The Good Wife, a series on Netflix which I very much enjoy, is there is a character, a judge, who insists that when the lawyers present their arguments, they should always say, “In my opinion.” I think this would be a good rule for people who expound the Bible, whether they do it online or teach, or preach. To give an opinion on part of the Bible, and to say this is absolute, when perhaps you are using a translation (eg, a version written in English) is dangerous. I would even go as far as to suggest it might be wrong. Yet people do it all the time.

My understanding of the ten commandments, is that the second commandment, is relevant here. It’s the one that says, “Do not take the name of the LORD your God in vain, for the LORD will not hold him guiltless who takes his name in vain.” (Exodus 20) I was taught that this does not mean casual ‘swearing’, using the name of God as a meaningless word, saying, “Oh God!” when we drop something (though that is also wrong, but for a different reason). It means, do not claim something is from God when it is not. Do not say, “God told me to…” if you’re actually not sure if it was God or your own mind. Do not claim something is God’s word – an absolute explanation of the Bible, if actually it is just your own opinion. Especially if it’s based on a translation.

People should not be so forceful when telling others what they believe, because they might be wrong. To say: “If you want to come to God, you must first say you are sorry, because that is what happened in the parable of the prodigal son,” would be wrong. ( I have explained this in my article on understanding stories : https://anneethompson.com/christian-tearfund-materials-and-poems/understanding-stories/) We can be sure of God, sure of our relationship with him, sure of his character. But when we are interpreting the Bible, we should show a little humility.

Perhaps those who take a particular stand on a subject, be it homosexuality, or the place of women, or euthanasia, need to be careful. Yes, we should pray about issues and ask God to guide us. Yes, we should stand up for what we believe is right. But we need to be ever aware that we are standing for what we believe. We do not speak for God. Sometimes we might be wrong. It worries me when I read Christians write about those who disagree with them, referring to them as, “Those who claim to be Christians,” clearly indicating that actually, their own view is correct, their own view is the true interpretation of the Bible, the others cannot possibly be right.

So please, next time you give your view about something, especially in a public forum, remember that it is your view, not God’s. Because, in my opinion, we can never be sure.