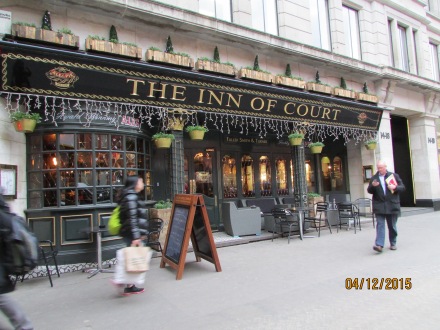 I love London, it is my favourite city in the world. I love the mix of old and new, the history that’s hidden in every corner, the millions of lives that have been so intensely lived during such different circumstances.

I have always disliked the London Underground but it’s convenient and safe, so I often used it. Then, one day I caught a train from Monument to Bank, got lost in the tunnels trying to find the exit and came back up the steps at….. Monument. I realised that the stations were somewhat nearer than I had thought. In fact, central London is quite small, you can walk to most of it.

This is a walk that I do fairly regularly. It is long (I walk fast and it takes me two hours) but hugely interesting. Wear comfortable shoes, don’t carry anything heavy and leave teenaged boys at home (they walk very slowly and moan a lot.)

The walk starts at Victoria station, named after the road it’s on, which is in turn named after the Queen. When you leave via the main exit, you will see the Shakespeare pub. If you ever get a taxi to Victoria, ask them to drop you at The Shakespeare – it’s much quicker (and therefore cheaper) than being taken to the taxi rank at the station. 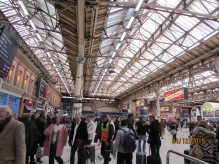 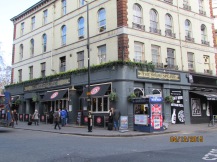 Walk along Buckingham Palace road. You will pass the wall that encloses the Queen’s house, then some entrances, including the entrance to her gallery.

The gallery is nice if you like that sort of thing.

You then arrive at the junction with Birdcage walk and The Mall. My tip here is : use the pedestrian lights. Most of London has pedestrian lights but they are slow and if you know which direction the traffic is coming from, you can cross much quicker on your own. However, at this junction, the traffic moves very fast, from multiple directions. When you are half way across a multi-lane road, it is a bit scary to see a fast approaching car. Have a quick look at Buckingham Palace and St James’s Park, then walk along The Mall. 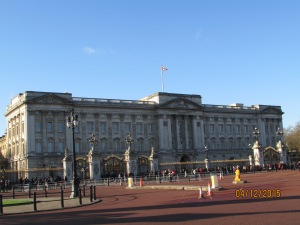 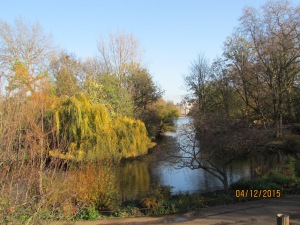 You could walk through the park, which is nice (it has ducks and a pelican that we once saw eat a pigeon. Yes, really.) But it is slower and The Mall is nice and wide and you can look at the posh houses on the other side of the road.

One of these is St James’s Palace, where Prince Charles lives some of the time. He seems to be having his roof fixed at the moment poor chap, never nice having the builders in. 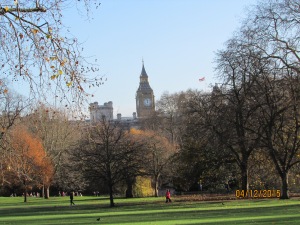 If you look across the park, you can see the London Eye and Big Ben in Westminster (which reminds you again how small London actually is.)

You will then arrive at Admiralty Arch. I have told lots of tourist friends/relatives that this is Marble Arch. It isn’t, though it is an arch and it does appear to be made of marble. It used to house government buildings but has now been sold to be a hotel. 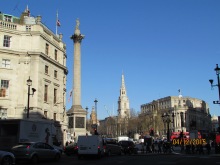 Through the arch, you will see Trafalgar Square with Nelson’s column and fountains and giant lions.

The lions are harder to climb than you might think.

Across the square is the National Gallery. This is a wonderful place, with free entrance and fantastic paintings (and toilets and coffee shops.) Walk diagonally across the square, heading for the large white church you can see on the right. This is St Martin’s. You will now be in Charing Cross Road.

Charing Cross Road is my favourite road. It has really interesting shops: old books, posh clothes that nobody wears and weird stuff. As you walk up the road, on the right is Covent Garden, on the left is China Town. I always think of Little Newport Street as the entrance to China Town (because they used to have a good Chinese bookshop there.) You will see lots of Chinese script as you walk up Charing Cross Road. 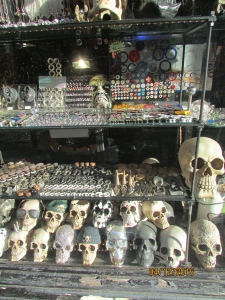 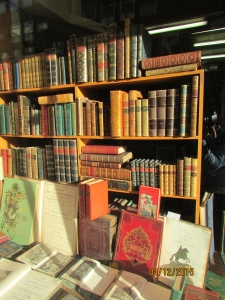 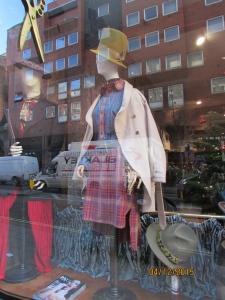 Turn right when you get to Shaftesbury Avenue, then cross High Holborn onto Bloomsbury Way. There are theatres here. There are less people and the buildings are a mix of offices and old churches. There are a few enticing lanes with nice cafes, the shop that always has bowls of fruit outside and some cheap grocery shops. There is also the hat stall (which always seems to be there.) Useful, one never knows when one might need a bowler hat. 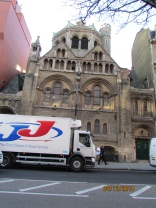 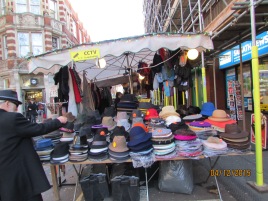 You will pass Bloomsbury Square (good place for a sit down in the summer) which is just in front of the British Museum. You will then arrive at Southampton Row. Turn left and walk up about 300 yards, past just about every chain of coffee shop and a Pizza Express. You will then arrive at a little lane, Cosmo Place. Walk along here to Queen’s Square. This is a small garden full of benches dedicated to people who I assume were treated in the surrounding hospitals. You are now next to Great Ormond Street children’s hospital and the Neurological Hospital (should you wish to pop in for a quick MRI.)

Walk down Old Gloucester to Theobald’s Road, then straight down Proctor Street to High Holborn. You are now in the legal part of the city. Turn left. As you walk along High Holborn you will pass lots of alleyways leading to the Inns. If you have read any of C J Sansom’s historical novels, you will love this place. My favourite is Lincoln’s Inn Fields. You can wander through the gardens, looking at the buildings, knowing they are pretty much unchanged since the days of Henry VIII. There are signs saying “No Public Right of Way” but I tell myself this refers to cars and just walk in and no one has ever stopped me. 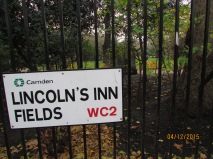 As you continue along High Holborn, you get a real feel for London. Really old stuff next to really modern stuff with new stuff being built. The fingerprints of history. Holborn Viaduct is a tangle of old and new. It is also near to Smithfield Market (slightly North) and St Paul’s cathedral (slightly South) if you want to make detours.

You will pass the end of the Old Bailey, the Central Criminal Court built in 1673. Before they had gas lights, they used mirrors to reflect the light onto the faces of the accused so they could watch their expressions. They also placed sound boxes above them to amplify their voices. There is a viewing gallery where you can watch cases being tried (it is nothing like ‘Judge Judy’ on television. No laughing and very tense. Real people in real trouble.) It was built next to Newgate prison, which was demolished over a hundred years ago (but still appears in historical books and films.) 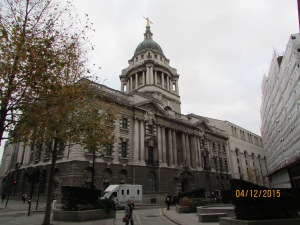 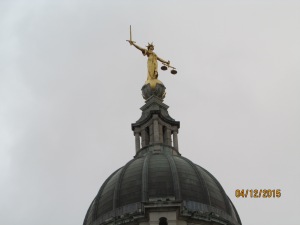 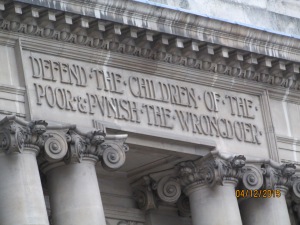 Turn left up King Edward’s Street to Gresham Street. You could nip up to London Wall. Here you will pass stretches of the original London wall, built by the Romans.

You will also pass Wood Street, where you can see Rapunzel’s tower. This is where she let down her hair so the handsome prince could climb up and rescue her. It has stood here since the days when this was covered in forest. (Actually, it is the remains of St Alban’s church, which was rebuilt after the great fire in 1666. It was designed by Sir Christopher Wren and then destroyed by a bomb during WW2.)

You will pass Guildhall, which is used for ceremonial rites. I went to a ceremony here once and the Lord Mayor of London came, escorted by Pikemen and Musketeers (which was somewhat unexpected but quite interesting.)

Turn right down Princes, past the bank of England (a lot of gold in there) and onto King William Street.

You will pass the Royal Exchange, which has posh shops and coffee places. I once went in there to try on expensive shoes (which I didn’t intend to buy) and I saw Brad Pitt when I came out. He held the door open for me. I expect it meant a lot to him. Opposite is Mansion House which is where the Lord Mayor of London lives (but I didn’t see any musketeers on guard. Perhaps they were in disguise.)

At the bottom of King William Street is Monument. This was designed by Sir Christopher Wren (busy chap) to commemorate the Great Fire of London. You can go up it, if you like heights, but you have to pay.

Walk across London Bridge and finish your walk at London Bridge Station. On the bridge you can look down the river to Tower Bridge, see HMS Belfast and the Tower of London.

So much history, all waiting to be explored. It’s a long walk, but there is so much to see you could easily add some cafes and take a whole day. 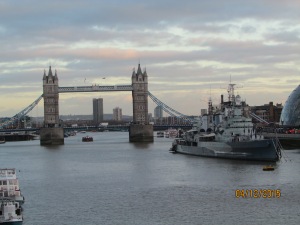 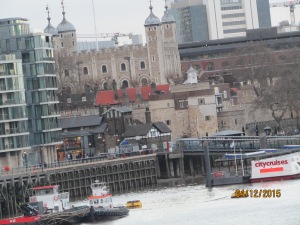 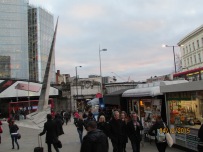 This is the spike, just outside London Bridge Station,
used for catching parachutists in the last war.
(My children never believe me when I tell them that.)

It is also available as a Kindle book.