Day One : Munich to Austria

Car arrived 5am. Everyone ready -unexpected -maybe some of them didn’t sleep. Flew Heathrow to Munich, all went smoothly, and everyone managed the automatic barriers. Eventually.

Collected minivan, and drove Munich to Salzburg. J made redundant from map reading due to rather efficient satnav.

Arrived at Sheraton at Fuschlsee, a lake near Salzburg. Staff at reception predominantly female, wearing national dress, which does make them very buxom. Impossible to avoid mainly noticing bosoms. H told M not to wear his glasses while we’re here.

Dinner in expensive hotel restaurant. Lots of antlers on walls, candles, flowers. Nice meal, but tired (me, not meal.)

Everywhere here is SO pretty.

Nice breakfast, though I had problems with coffee machine and covered surrounding area with milky froth -rescued by very nice waiter who collected me a mug of coffee.

Drove to Hallstatt. Traffic terrible and nowhere to park, so we abandoned Husband and car, and walked into town. It was full of Chinese people, really full. Coach loads of them. All the signs were written in German and Mandarin, so clearly a regular occurrence. Also full of extremely expensive souvenir shops. Followed signs with a skull on them up a mountain (J in flip-flops, but still faster than people in hiking gear). Signs took us to a cemetery.

Found Husband and ate lovely homemade pizza for lunch. Read guidebook to try and find out significance of skulls and cemetery. Read that apparently, cemetery is very small – due to being half way up a mountain, so when it was full, someone had the good idea that they could dig up the old corpses and replace them with the new ones. Honestly, this was the solution they decided on! Did anyone object? Was there a committee involved? Anyway, this is what they did. While the bodies were waiting to be buried, they decomposed, and the bones were bleached by the sun. The skulls were separated from the other bones, and they are displayed in a side chapel. We HAD to go back and look. There they were, bones stacked neatly, skulls decorated with the name and patterns. Brilliant!

The rest of Hallstatt is also interesting. Lots of cute cottages clinging to the mountainside. Too many tourists and over-priced shops, but well worth a visit. 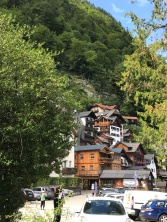 Dinner in Fuschl. Parked in large town car park, returned after dark, and didn’t know how to pay. Husband set off in the dark to investigate, we sat in car, then decided to send S (largest male) to protect him. S detoured via barrier and tried to lift it manually. Worried he might break it, Husband would return with paid ticket but we’d still be trapped due to broken barriers. R worried there might be zombies (so glad she’s 25 and works in a bank – easy to forget that sometimes). D returned, barrier worked, all good.

Arrived safely back at hotel, despite best efforts of suicidal deer on dark road. Nice day. Tomorrow we plan to visit Salzburg (which is very exciting, as it’s where they filmed The Sound of Music – because it’s where the real family actually lived.)

Only table big enough for seven of us was outside, which was good due to sunshine, and bad due to wasps. It’s a good breakfast, with lots of choice (and S chooses nearly everything. This is good, because Austria is not great for vegetarians, and even menus marked as ‘vegetarian’ sometimes contain fish.)

Drove to Salzburg and parked in a car park dug into the rock. Car parks here are well signed, with each one telling you exactly how many spaces are left.

Saw a lot of traditional Austrian dress – the boob enhancing white blouse under pinafore dress for women, and lederhosen for men. I understand why people in tourist shops/restaurants would wear this, but not really why so many other people do. Especially lederhosen. These are leather shorts, and I’m guessing there’s not much ‘give’ in them – I saw a lot of men attempting to walk without moving their legs, they had a sort of shuffle. Not a good look. Also not sure if you can wash them…

Went to Residenzplatz -saw horses and fountain and cathedral. All very pretty, though the cathedral feels more like an art gallery than a church – was interesting and grand, but did not inspire me to prayer. It also had some very spooky cherub faces in the ceiling.

Saw a bridge and steps that I recognised from The Sound of Music. Suggested family could reenact some of the scenes, but they were unkeen. Went to Mirabell Garden (“Do! Doe, a deer..”) and saw some excellent gnomes. I think they represent the children of the owner – I might copy this idea.

Walked across a bridge covered in padlocks put there by people in love. Sweet idea, but what happens if you fall out of love? Do you sneak back with a metal cutter and remove your padlock?

R and S went off to buy trainers. We received lots of texts from R saying she was hot/thirsty/tired/dying, so we knew she was okay (silence would’ve been a worry). We walked to a viewpoint near castle, and the convent Maria Von Trapp left. The chapel was open, so I went inside. That church DID feel like it had been prayed in, I preferred it to the cathedral.

Walked back past the cathedral. Saw a sculpture outside, which was an empty person ( I later learned it was a copy of The Cloak of Conscience by Anna Chromy and is called Pietà, or Coat of Peace). Next to it was a begger – another unseen person, which felt significant given her position – an invisible person next to a sculpture of an invisible person. Perhaps that’s why she chose that spot to sit in. I gave her some money, which I don’t usually do, and held her hand – I wanted her to know she was ‘seen’. We all need someone to see us. 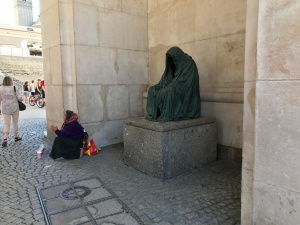 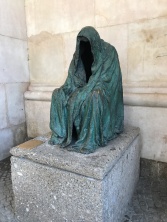 Followed J a long way – a very long way in hot sun – to Lindhofstraße 7, to a beer garden the boys had discovered last summer when inter railing. It was brilliant. There were shelves of pottery beer tankards, which you could dip into a dodgy looking fountain, to increase the head on the beer. You paid a man, took your ticket and tankard to a man with a barrel, and he filled it with beer. You then sat in the garden, under the trees, next to the brewery. You could also buy olives, pretzels, sausages, but most people were just drinking. Great fun.

Breakfast 9 am. Managed to sit inside today. Sheraton provides a good selection for breakfast – and S selects most of it. Today he poured chocolate powder over his eggs by mistake (same wrapper as mustard). We, of course, never mentioned it again, because we’re a tactful, understanding, family. R had a boiled egg, which wasn’t. J spent 3 hours cooking a waffle (had to restrain Husband so he didn’t go to “help” him.) But we didn’t break the coffee machine today. 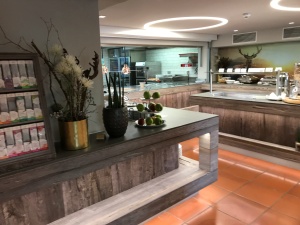 Choices for activities today were: walking, rowing, golf, cycling, swimming. We, of course, had a voting system (20 votes per person) and made an Excel spreadsheet. Sometimes I wonder how I came to be part of this family. Anyway, rowing won.

Hired two boats (€10 per hour) and set off across Fuschl Lake. Made it to a jetty with a fish restaurant and had drinks. Had to walk across a scary floating jetty and down a plank of wood. I don’t generally do well with activities that involve balance. Used washroom – all public conveniences in Austria seem to cost 50 cents. Rowed back. It is harder than you might think to row in a straight line.

Family played golf (not me). Then we met for hideously expensive drinks in pretty hotel bar.

Had trouble booking anywhere for dinner, as it’s Assumption Day and everywhere is closed (would’ve been nice if hotel had warned us). Ate in The Grill at hotel. Nice food, very friendly waiter.

Nice breakfast again. M and H swam before breakfast. ( M has clearly been abducted by aliens who are now impersonating him, but I rather like having a son who gets up before midday, so I don’t mind.) Drove to St Wolfgang and caught tourist train up mountain. Tickets so expensive Husband wouldn’t tell me the price.

Mountain very cold at the top. R wearing summer dress and sandals – interesting decision. We covered her in Husband’s hideous cagoule. Brilliant views, though one side was covered by cloud. The peak looked like a film set for a Nazi film, with a wooden house with flags for secret planning meetings. 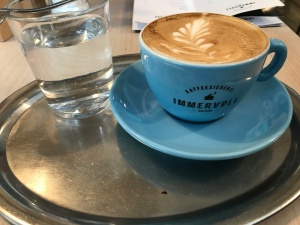 Drove to Bad Ischl to a coffee house recommended by Trip Advisor. (When in Austria, you HAVE to visit a beer garden, a coffee house, and run across an Alpine meadow singing words from The Sound of Music. It’s the law.) Really nice coffee, really grumpy waiter. We wanted lunch, and when we asked if the menu had any vegetarian options, he told us to go to the cafe up the road! Used the washroom, which had a strangely placed mirror – I could not see any purpose for it, do people check their make-up while sitting on the loo? Very nice coffee though….

Saw some red phone boxes. One was filled with bookshelves, and was a ‘book-swap’ place. Nice idea.

It’s our last day in Austria, so I bought a cushion cover for my collection. Tomorrow we drive to Slovenia. Now, I just need to find a meadow to run across……

Anne E. Thompson is the author of several novels and one non-fiction book: How to Have a Brain Tumour. You can buy her books from bookshops and from Amazon.