A Snapshot of New York in March

A Quick Trip to the U.S.

Husband had a work trip in New York, so I decided to tag along. I knew it had been snowing (even more than usual) so chose my clothes carefully: no thick sweaters because all rooms, restaurants and taxis would have heating on full, very thick coat because outside would be freezing, walking boots because paths would be wet and salty. This all worked well except that I had not thought about the journey. As we walked through the exec lounge and sat in first class on the plane, everyone else was wearing suits and smart shoes. I pretended I was part of Bear Gryll’s production team and dirty walking boots were completely normal footwear. Think everyone was fooled. (Except for husband, who banned the woolly hat until we had left the airport.) 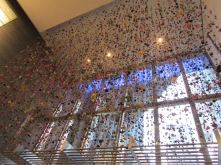 When we first arrived, I wanted to go and see the flower display that Rebecca Law had done in the Viacom building in Times Square.

I had seen it on the internet, so was interested to see it myself.

There are three different art displays, one in each entrance and one at the top of the escalators, before you go through the security barriers.

I liked them a lot, especially the upstairs one as it was in a smaller area and you could smell the flowers as they dried.

It was interesting to notice that people leaving the building all tended to look up at the display as they passed.Most art displays become ‘invisible’ after a while, where as this was clearly still being looked at.

We spoke to a man who worked there and had been involved with assembling the display. He said it was quite hard work. I think he enjoyed talking about it more than he had enjoyed actually doing it.

Strolled around. There were piles of snow heaped in the gutters and all the paths were very wet. I liked looking up, seeing all the different levels of rooflines. Lots of huge billboards flashing brightly lit adverts. The streets smell of roasted chestnuts and hotdogs as you pass the vendors. It was so cold, any exposed face actually hurt.

Went to Duane Reade – useful if you travel with someone who snores (earplugs), are feeling unwell (medicines), or have lost your luggage (make up and toiletries.) They also have food for when you wake at 4am wide awake because the time zone is different.

Passed the New York Public Library, which I have seen many times but never actually been into, so decided to go inside. It has a beautiful entrance, you walk up marble steps into a marble lobby with many staircases.
I walked upstairs and came to a hallway with a beautifully painted ceiling and lovely carved door frames. Went into a room, where people were working at long tables and portraits lined the walls. There were no books. I had seen the library in a film where they had burned books to keep warm, so I was pretty sure there should be books. Unless they had burned them in real life?
Explored a bit further. Still did not see any books. There were lots of doors, which were locked. Found more paintings and a book in a glass case. Began to find this amusing. Were there books in this library? I wondered if the architect had got carried away with making it all look lovely and had then decided he did not want it spoiled with lots of books. Maybe the initial brief had been unclear. Guessed this may have caused some arguments, especially as the word ‘library’ had been carved above the entrance.
Asked a guard if there were any books. He directed me into a room of map books. Not really what I had hoped for. Saw lots of people studying microfiche, but no books.
Decided to go back to the entrance and ask at the ‘information’ desk. Felt a little surreal to ask “Are there any books in the library?” However, found a very helpful little man who looked like he should have been selling magic wands. He explained that actually this was a research library. He told me that most books – novels etc – are kept in the library opposite. He then clearly decided that as I was foreign, I may not understand what a library was, so went on to explain that residents could obtain a library card and could both read books or even borrow them and take them home for a week or two. Managed to keep my expression interested and surprised. Thanked him and left. I still have a feeling that I somehow managed to miss a huge room full of books, but I never found it. Beautiful building though.

Went to bed about 5pm. Woke about 3:30 am. At 4am, gave up on sleep and got up. Decided to try and find a deli or diner for some breakfast. It was snowing quite heavily, so very happy to have my sturdy walking boots and big coat. Did not expect to meet anyone, so pulled on jeans and coat over pyjamas. Felt rather adventurous to stand in Times Square wearing pyjamas!

New York at 4am is very nice. It is still brightly lit and feels very safe (I wouldn’t go down any small alleyways but main streets were fine.)

Lots of people were around – mainly shift workers and homeless people I guess. 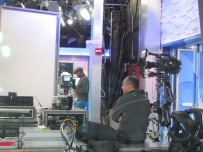 Walked past the ABC studios. They have a window into the studio, so you can watch them filming the breakfast show.

We were joined by a lady who became very excited to see Mary Mary about to perform. Apparently they are famous gospel singers. We joined her in waving excitedly and they looked pleased and waved back.

Luckily they didn’t know we had absolutely no idea at all who they were!

At 8:30 NY time, we went into the hotel restaurant and had pancakes and more coffee. (I was showered and dressed by now, in case you were wondering.) Had a stack of pancakes and maple syrup. Another New York essential. I figured this counted as lunch if I stay on BST.

In the afternoon we met some friends. Got a taxi (they allowed us to fit 4 people) to Central Park. It was so pretty with all the snow.

Ate in Tavern on the Green. This is a lovely restaurant right in the park, inside had lots of art deco furnishings, outside twinkling lights reflecting on the snow. It had comfy seats (makes a big difference to a meal!) and an open kitchen so you could watch the chefs. When we had eaten there previously (1999) it had a smart dress code but now it is casual, so jeans were okay.
Food was nice but my body thought it was 2am and could not cope with eating much. They packed up the remains of my dinner ‘to go’, which all restaurants in US seem happy to do and it takes the guilt out of having a small appetite.
A lovely evening in a beautiful venue.

Didn’t go shopping, but there is every opportunity if that’s what you enjoy.

It would at least be warm.

Another, colder, option is to visit the Intrepid Aircraft Carrier museum on the Hudson.

You could then eat in a typical American diner.

Had pie and coffee and pretended I was Jack Reacher.

A slightly more luxurious alternative with a much better view is dessert for $12 at The Mandarin Oriental on Columbus Circle. Afternoon tea is $48 (or $80 with a glass of champagne.) If you want a window table (which you will) then be sure to book it when you make your reservation. 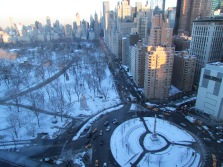 Another fun thing to do is to walk along The High Line. This is a disused elevated freight railway, which has now been turned into a park/walkway. In March, with all the plants under snow and in freezing wind, is probably not the best time to see it. However, even in arctic conditions it is interesting. You can see lots of old industrial buildings, there is random artwork along the route and best of all you can walk for nearly two miles without constantly stopping for road junctions. (Walking in New York is mostly slow and disjointed unless you are in Central Park.) 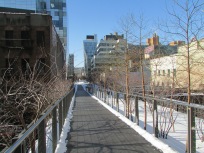 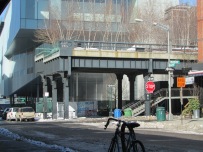 Being in New York is always fun, always easy and there is always something to do. Even a short trip is worth the jet lag.
(And if you happen to know where the books are in the public library, please do tell me in the comments below!)

The US link is here:US link

One thought on “A Snapshot of New York in March”