For many years, despite many many hints, I never went to Paris. My husband informed me that it was to be the epitaph on my gravestone: She never went to Paris.
Finally, in 2009, I stopped waiting for romantic husband to take me and decided to go with my daughter. For the record, I have been three times since (once with romantic husband, who clearly felt left out.) Not being a great traveller, we decided to go by train. My organised (if not romantic) husband booked the tickets for us and a night in a hotel.
We left home in good time and travelled up to St Pancreas with loads of time to spare. We found it rather funny that husband had taken us to station so early and spent an hour wandering around shops and having lunch in a cafe. We then dawdled to the platform entrance about ten minutes before train was due to leave. I then discovered that unlike a ‘normal’ train, you have to have your luggage checked and go through passport control when catching a train abroad. Everyone was very stressed by how late we were and we were whisked through security and boarded train just as it was leaving.
Train was easy and comfy and we had a meal as we travelled. After a while we went through a big tunnel. As we emerged on the other side we remarked on how short the tunnel had been and how the French countryside looked exactly like England.
We then drew into Ebbsfleet station and realised that we weren’t actually in France yet! When we did finally arrive in Paris, it was all very easy. We left the station and followed signs for the taxi rank. The trip was supposed to be to improve my daughter’s French before her GCSE. I realised how important this was when she declared, “Oh, I can see the French word for ‘taxi’. Look, it’s written on all their cars. It’s ‘Parisian'” 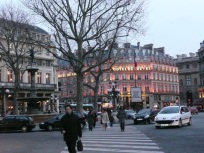 We stayed in Hotel du Louvre and I would highly recommend it. If you are not a confident traveller, it is near enough to walk to the Louvre, the opera house and along the river to the Eiffel tower. The staff were friendly, it was clean and they have a wonderful restaurant. Just beware if you have hot chocolate in the bar, it is unexpectedly expensive (much cheaper to order it on room service.)

Checked in and walked around. No guide book, so passed lots of buildings that were clearly ‘something’ but no idea what. Took lots of photos. Bought a very French cake in a very French patisserie. 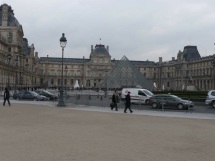 Went to the Louvre. Finding the Louvre was easy (it was next to our hotel.) Finding the entrance was more of a challenge. We spent a long time trying various doors. Eventually realised that the pyramid in the centre of the courtyard was in fact, the entrance. Felt rather silly. Saw Mona Lisa (and other stuff.) 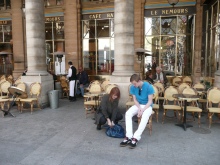 Went to Le Nemours cafe. It happens to be right next to our hotel (you may be noticing a theme here) but it is also a perfect French cafe. It seems to appear in ALL films set in Paris. It has the wicker backed chairs, the round tables outside, the half curtained windows, etc etc. It is also (for Paris) quite cheap.

Walked to Opera house. Fancy. Went to Lafayette – a shop which is more fancy than the opera house. I do not like shopping but this one is worth a visit, if only to see the domed glass ceiling and all the balconies.

Walked along river to Notre Dame. Happened to be inside when choir was practicing, which was pretty perfect. 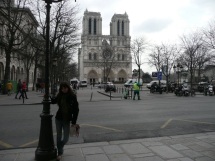 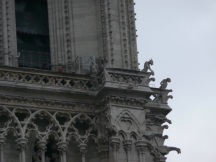 Got taxi back to station and train home. Taxi driver charged us an extra euro because we put bags in the boot. Not sure if that was normal but my French was not good enough to argue.
Arrived home and husband told us the name of all the buildings we had photographed and suggested we took a guide book next time.

Next visit was in 2011, when I repeated the trip with son who was about to do his GCSE. This time we drove to Ebbsfleet and parked there. Much easier if you live in the South.

On the train, I suggested that he should work out how to say, “We realise it is too early to check in but please could we leave our bags while we look around Paris,” ready for when we arrived at the hotel. Son told me that GCSE French does not cover that sort of thing. I informed him he had over an hour on the train to learn how, as my French is almost non existent. He wrote copious notes. When we arrived at hotel (same one as before. It’s nice) he read out his sentence. They did not completely understand but spent a long time explaining to him what he should have written. They then showed us around the hotel, explaining everything to my son in very simple French. Please note: My main suggestion for anyone visiting France is learn a little French. I found that if we spoke bad (in my case, very very bad) French, then everyone was really helpful and did their best to help us, often answering us in English so that we understood. People who just ask in English seem to have a much less friendly reception.

We did much the same things as when I visited with my daughter, though not the shop and not the hour trying to find the entrance to the Louvre. 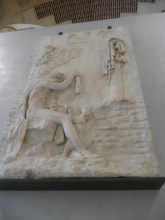 Man feeding rabbit to his dog. Am not sure why he is naked but he is being very careful where dog puts           his paws!

We also discovered the water taxi/bus which goes up and down the Seine. It was easy to buy tickets and you can get on and off where you want.

We also went to a cafe right outside Notre Dame cathedral, overlooking the river. We ordered drinks and the friendly(!) waiter offered me a slice of gatueau. He then asked if I would like cream with it. When the bill arrived, I realised it was the most expensive cake I have ever eaten. I think the cream alone was about 6€. I told myself I was paying for the view and swore son to secrecy. Please note: Always worth checking prices!

Paris is lovely. You can wander around the streets, walk next to the river and eat in little cafes. Everyone is friendly (as long as you speak French, even bad French) and there is lots to see. One day I might even venture further than a mile from the Louvre…… 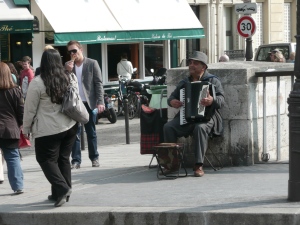