When I packed for the flight from Bangkok to Singapore I decided to take some nice bubble-bath I had bought. I put my swimming costume next to it in the case, as it wouldn’t get ruined should bubble-bath leak. Then realised it was potentially embarrassing – I might be the lady swimming in the hotel pool followed by a trail of bubbles…..

Flight to Singapore uneventful. I was in economy, next to a man who twitched continually and behind a woman who pushed her seat right back as soon as we’d taken off and then kept stretching her arms up and putting her hand over the screen in front of me. Resisted urge to slap both of them.

Also resisted the meal: plastic scrambled eggs. I just ate the bread roll and dessert, which was garnished with a strange plastic looking fruit. I bit it. Think it really was plastic.

St. Regis hotel in Singapore pretty much exactly the same as the one in Bangkok. But the staff less ‘polite’ – in Bangkok everyone puts their hands together and does a little bow, which I kinda liked (though it’s hard to do when carrying stuff, I kept dropping things.)

I slept most of the afternoon. Then we got a taxi to the old part of town to an old colonial hotel, Raffles, famous for the cocktail Singapore Sling. Had one in the long bar – very traditional in a sort of Disney, pretend way. It was very pleasant, all clean and very atmospheric with lots of dark wood, ceiling fans, sacks of nuts on the table with nut husks all over the floor. The cocktail is tall and sticky with froth on top and served with a pineapple chunk and a cherry. Mine was sadly lacking in discernible alcohol.

There is currently a lot of air pollution in Singapore – a ‘haze’ as they call it (it looks misty all the time.) This is pretty bad and causes itchy eyes and breathing problems when it’s at its worst. It’s caused by people burning great swathes of land in Indonesia. They do this for a couple of reasons: it’s much cheaper to clear land for crop planting to burn stuff rather than to cut and clear it, it is also a way of attacking your neighbours when there are disputes over who owns land (a problem due to how forests cannot be registered) and also, peat bogs, when they dry out, are very flammable.

The people in Singapore and Malaysia are furious about this, especially as it happens every year. They have to close schools, cancel flights and avoid going outside when the pollution is at its worst. The Indonesian government are making plans to stop the problem but from reading the papers (which are in Singapore, so possibly a bit biased) they make plans but don’t actually change anything. This is a problem that seems to have occurred every year for about forty years. The funniest report I read was where a politician in Indonesia said that rather than complain, the people of Singapore should thank Indonesia for their clean air the other eleven months of the year. Not sure that helped relations much…..

On Monday I walked around the historical part of the city. I got a taxi to Raffles hotel, then walked past St Andrew’s cathedral – I could have been in England.

I arrived at the National Gallery but couldn’t work out the doors. They appeared to be bolted shut from top to bottom. The sign said the gallery was open but I tried pushing, pulling and sliding the glass doors – they did not move. I suspect this was my fault. However, peering through the glass, the gallery did look very empty, so perhaps other people had problems getting inside too. Seems to be bit of a design fault for a door to not open (is rather the defining point of a door, separates it from a wall.)

Abandoned non-opening doors and walked to river, crossed a bridge to Fullerton Hotel. This has the absolutely best sculpture outside. Walked along quay. There are lots of tiny restaurants, the whole world in one lane. I passed English pubs, Spanish tavernas, Chinese restaurants (these had the biggest shellfish outside in great glass tanks). It was a little like being in the Epcot Centre at Disney. There were good views of the Marina Bay Hotel (which looks like it has a giant boat perched on its roof) but it was too hazy for a decent photo. Several people were wearing face masks to keep the pollution out.

I followed South Bridge Road up to China Town, passing Park Royal Hotel. This is opposite Hong Lim Park, but actually there was more stuff growing on the hotel than in the park – green blankets of plants spilling over every balcony. I passed tailors claiming they could make a suit in six hours, Chinese sign-painters with canaries singing in cages, a Hindu temple with shoes littering the street outside, stalls selling silk, beads, masks, key-rings, lots of street food.

There was a mosque with a big sign outside, declaring that Islam is a peaceful religion and should not be judged by the actions of a few terrorists. I thought that was rather sad.

It was hot and humid, so I walked back to the park and drank a Sprite before getting a taxi back to hotel. In Singapore you cannot hail taxis in the street (I spent a long time trying to do that on a previous visit. They ignore you.) You have to wait at a designated taxi stand, which is a lot like a bus stop. It’s easiest to just go to a hotel foyer and wait for one to arrive. Singapore has a lot of hotels.

Singapore is clean and safe and has lots to see that is interesting. I did not though feel that I had seen the ‘real’ Singapore, I have left with no impression of the people who live there. Perhaps it is harder in a more developed city to see how people live and work, to glimpse the real culture beneath what is presented to visitors. I wonder if the same could be said of London, I wonder what visitors see when they tour our tourist attractions. 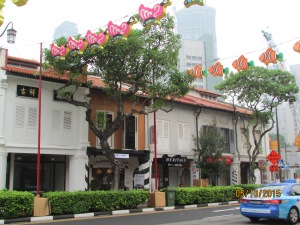 Lots of two storey buildings with shutters. Was like going back to the 19th century – until you looked up at the sky line. 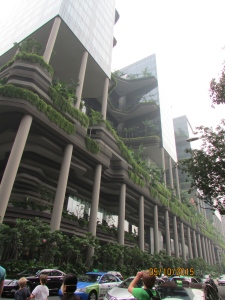 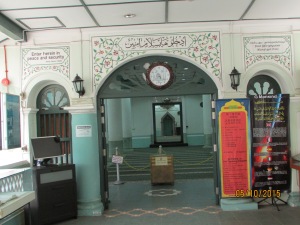 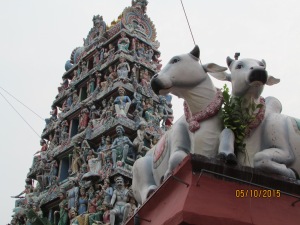 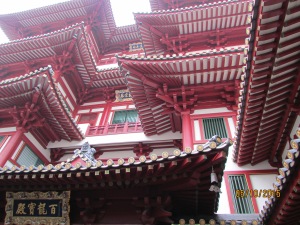 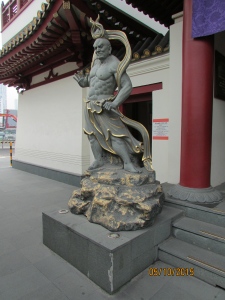 Thanks for reading…..
If you enjoyed this, why not sign up to follow my blog?  Then you will receive all my posts by email (usually two per week.)