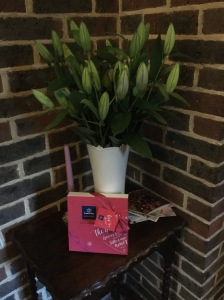 Did you have a nice week? I managed to remember both Husband’s birthday AND Valentine’s Day last week. This is surprisingly difficult because they come so close together. I did one year forget the Valentine’s card completely. I didn’t realise until I was going to bed late on the evening of the 13th. We always exchange cards first thing in the morning, so there was no way I could make an excuse and say I was giving him my one later – he knows me too well, he would know I had forgotten. What to do?

Then I had a brain wave. Husband is a very organised person. He always keeps everything in tidy places, they are easy to find. He is also quite sentimental, he keeps all the cards that he is given. These traits provided an excellent solution. I sneaked to the cupboard where he keeps his old cards and found a Valentine card that I had sent him a few years previously. Popped it into a fresh envelope and there you are, all sorted. The next morning, there was his card waiting with his morning tea, just like normal. (Yes, I did admit to it, but much later, after it wouldn’t matter. He wasn’t surprised.)

I have never claimed to be a saint, (and people who know me have also never felt tempted to give me that title.) With this in mind, you will understand why I have decided that our church’s plan for Lent – to do one random act of kindness every day – is beyond me. I am just not that nice. I have therefore decided to lower the bar a little. I am going to try and not be bad at least once every day during Lent. So far this is going okay.

It means I have to do things like change light bulbs sometimes. I hate doing this. We keep the light bulbs in a cupboard that is very awkward to reach, between a chair and a bookcase behind a table. Getting new light bulbs is a hassle. Now, our bed has two reading lights in the wall behind it. I like to go to bed early and read for hours, so my light often needs a new bulb. Husband rarely reads in bed, his bulb hardly ever gets used. It is much easier, when my bulb runs out, to just swap it with the one in Husband’s light. He did comment last week that the bulbs don’t seem to last very long because he never uses his light but the bulb frequently needs replacing. I just smiled. If my bulb goes during Lent I will replace it properly. Probably.

I also have to try and not laugh inappropriately. This is very hard for me. I am someone who laughs a lot – it is my default reaction. I even laugh when I am asleep sometimes, which is very annoying because I wake myself up giggling and then cannot even remember what I was laughing at! Husband also complains.

The thing is, I do find rude jokes funny, ‘The Inbetweeners’ was my favourite programme for a while, which even my children told me was inappropriate for a woman my age. When someone drops something or falls over or says something wrong, I feel those giggles bubbling up inside and the more I know I must NOT laugh, that they will find it hurtful, the harder it is to stop.

I am making a special effort for Lent (though actually that bit is not going so well. Someone told me this week that their neighbour had been found dead in their car. They were waiting for the AA to arrive. They had a flat battery. Something about it just struck me as hilarious. I’m not sure I managed to look sad and caring, but I did try.)

It was always a problem when I was teaching – I was never very good at telling off the children because I always wanted to laugh.

I remember once a thirteen year old boy came up to me very pale faced and told me that he had swallowed the end of his crayon. He was obviously terribly worried that he would die or something. I’m afraid I wasn’t the sympathetic caring adult that I should have been at that moment, partly because it was stupid for a boy that old to be chewing his pencil anyway.

I also remember when I was teaching infants and a little girl came to the front and said she wanted to sing a solo to the class. All very good for building confidence and allowing her to express herself. Except that it was terrible and by the end I had tears running down my cheeks and was hidden in a hanky pretending to blow my nose so the class wouldn’t realise I was laughing. It was not my finest hour as a caring primary school teacher.

Anyway, hope you are managing to laugh at the right times this week. Sometimes it’s a life saver.

PS. You do realise that Mum cycles on the path, don’t you? Why does she need a BACK light??

PPS. I feel you need more veterinary practice. You can take daughter’s cat (who hates me) for her jabs while you’re here.

You can find my sister’s letters at: 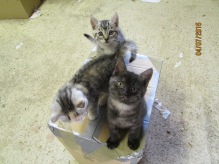 One thought on “Letters to a Sister : 43. Lent and Laughing”