“Move out the way!” shouted the man as the elephants approached the river.

I thought this was bit of an over reaction, there was plenty of room for him to pass, but I did move slightly more to the side.

Then I realised more elephants were coming behind him. And more….

Great lumbering beasts, so big, so intent on getting to the river. A bit like a crowd of nine year old boys rushing to play, very likely to knock someone with their shoulder by mistake. But these shoulders were huge, I would be toppled and crushed within seconds. I moved further back, up some steps leading to a cafe. The elephants lumbered by. 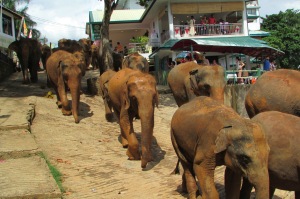 I cannot explain how exciting it was. The thrill of a brass band that vibrates deep inside your being, the thrall of something wonderful and scary all at the same time. Best sight ever. They trooped down to the river and then behaved a lot like my family would. One stood away from the others and just enjoyed being in the river. One submerged completely and just lifted a foot from time to time. One squirted himself and anyone near. One was very task focussed and had a good wash. One tried to organise all the others. I won’t name them… 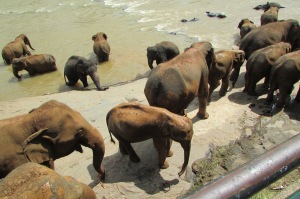 We saw them at the Pinnawela Elephant Orphanage. I was slightly worried about how ethical it was – there were some chains and men with sharp sticks and quite a lot of shouting. But bull elephants are randy in the spring and need to be controlled, and I don’t know anything about rearing elephants (clipping a duck’s wings probably looks cruel to someone who doesn’t understand) so I will reserve judgement. Certainly they looked happy as they went to the river. And there were lots of warning signs – they hadn’t been tamed, they were still wild animals (which I like.)

We saw babies being bottle fed and adults stripping leaves from trees. But nothing compared to the bath in the river.

We hired a car and driver from the hotel. The whole day was good – a chance to see more of Sri Lanka. We saw birds as vibrant blue as a slush puppy, paddy fields being planted with rice, pineapples growing on a bush, a woman leading three porcupines on a lead and stood in rain drops that felt like whole cups of warm water being thrown at us. But really, I just wanted to tell you about the elephants.

I like Sri Lanka. It has an unspoiltness about it. It is the only place I have been that doesn’t have a MacDonald’s and Costa Coffee as every second shop – perhaps because it’s only a few years since the civil war ended, so tourism is just beginning to develop here. If you are planning to visit, come soon, before it changes. 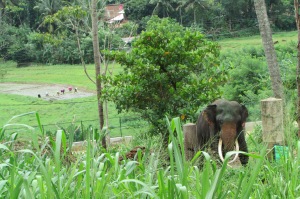 2 thoughts on “Elephants at last….”