So, a few disasters this week. I’ll gloss over them quickly. First was on Monday, at Aunt and Uncle’s Golden Wedding Anniversary. It was a lovely event, saw most of the extended family, food was beautiful, everyone seemed happy. I felt somewhat of a plonka, having taken the “Dress Code: Sixties” bit to heart. Thought I ought to make an effort. Most other people had taken the “optional” bit to heart. Felt rather silly in mini dress and false eye lashes. Especially as there were a few non-family guests present, who possibly thought I usually dressed up like an ageing drag queen.

Next disaster was Wednesday. After a couple of days of high winds, the tree outside our bathroom window had scraped roof tiles onto the ground. The tree acts as curtains – we don’t have nets at that window – but those branches needed to be trimmed before they did more damage. Husband then phoned trusted builder to come and repair hole in roof. Which he did. Early on Wednesday. When I was just about to have shower in now uncurtained bathroom. That would have been good information to know in advance…..

Lets move on to some animal updates:

Before we went away, the sitting duck hatched her eggs. Ducks are generally terrible mothers – they have a tendency to sit somewhere the ducklings can’t reach them, or squash them by mistake. She had nested in a big plastic crate (nicely rat proof) so I lifted out the eleven hatchlings and put them with the mother into the dog cage in a corner of the aviary. She was furious with me, but I did manage one photo:

They were sharing the aviary with the earlier two ducklings. The mother hissed at them whenever they went near, so I had to keep them separate. This wasn’t difficult, as really all they wanted to do was be with the chicks that they’d been raised with. They wandered up and down the edge of the aviary, cheeping at them. It was hard not to put them back together, but I know it would cause big problems later.

The big chickens (nasty, nasty, creatures) kept attacking the new chicks. They will be so much safer if they manage to form a unified flock, so I don’t want to move them out. Instead, I positioned lots of crates so they had areas they could escape to when attacked, and hoped for the best.

When we returned from Sri Lanka, I couldn’t believe how big they all were. They were, unexpectedly, all still alive (the house sitter did very well.) The chicks are now small chickens. They have still not exactly ‘bonded’ with the existing flock, but at least they’re not being attacked. They’re also copying them, sitting on the crates at night as an attempt to roost. 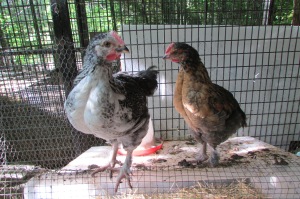 The big ducklings look full grown. As soon as their wings feathers have grown, I’ll clip them and put them on the pond. You only clip one wing – it’s like having your nails cut, it doesn’t hurt. But they won’t fly if they’re lopsided, so I can shut them onto the pond at night and they can’t sleep on the bank and be eaten.

The eleven ducklings are also much bigger. Am pretty sure the mother stole one of those eggs – there’s one completely black duckling, very beautiful.

Looking after the birds helps me forget about publishing – publishing a book is a LOT of hassle – nowhere near as much fun as writing them. I was hoping that Hidden Faces would be in the bookshops in July, ready for the summer holiday readers. That looks unlikely now, more likely September. Which might mean fewer sales, or might mean people will enjoy it and then buy it for someone else for Christmas. Hard to know. I am trying to be patient, to remind myself that God helped me write this book, if he wants people to read it then editors, typesetters and printers won’t ruin the time plan. But at times I want to scream!