Poland was unexpected. Why has no one ever told me what it is like? Husband had a work trip in Warsaw, so we decided to come to Krakow the weekend before, have a romantic weekend. Before I came, I had this image of post Soviet Union countries all being very similar – lots of flat roofed concrete buildings, all very ugly and sinister. I came to Poland for the experience, to see with my own eyes what I had imagined. It turns out I had imagined wrong!

First we flew to Kraków. We flew with easyJet, which I quite like actually. Check-in was quick (you did it yourself but there were people to help if you got stuck) and you didn’t pay for anything you wouldn’t use. I paid £6 on board for a cheese roll and a drink. It was a nice cheese roll.

We arrived in Kraków and got a taxi to the hotel. I was interested to watch the city through the taxi window – was more Bruges than Tower Hamlets. There was a river with floating restaurants, a castle, cobbled streets, lots of cyclists. 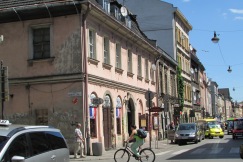 The following day we walked around the city. I wanted to go to see where Schindler’s factory was (as in Oskar Schindler, who saved so many Jews in the war.) We walked through the Jewish Quarter- saw lots of old buildings, houses with window boxes of flowers, synagogues, Torah schools. Before the war, a quarter of Poland’s population was Jewish.

You could then walk across the bridge, over the river – the same route that the Jews would have had to walk when they were told to leave the Jewish area, their homes, and go to live in the ghetto.

There were about 20,000 Jews squashed into a few streets. Obviously the fences had gone, but many of the streets were still named Getta and you could see the old chemist shop, which is now a museum. The square, where people were sorted – allocated into houses or trains to the camps – now has statues of giant metal chairs. Empty chairs to show the lives that were stolen. Some of the chairs were normal sized and near the tram stop. Husband sat on one. I worried this was disrespectful, but apparently the sculptures were planned like that, to show that anyone could have been taken.

Schindler’s factory, a few minutes walk away, was just a factory. Here there were lots of concrete buildings. There were photos in the factory windows of the Jews who had worked there and the inside is now a museum and an art gallery, which I didn’t fancy looking at (not very keen on museums.) I picked up a leaflet about a tour to Oswiecim (which is better known by its German name of Auschwitz.) Decided visit would be traumatic, not really the right thing for romantic weekend away with husband, better to go as a separate trip in the future. 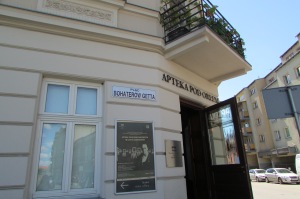 Went to old part of Kraków. This is beautiful. Cobbled streets (glad I wasn’t wearing heels), horse and carriages, ornate churches, weddings (with the bride and groom wearing very synthetic clothes which looked almost like costumes), Prussian architecture, trams, sunshine. There were little markets full of breads and pickles and crafts. Really, it was SO like going to Bruges at Christmas time, but with sunshine!

The churches were dark, full of candles and gilt and oil paintings. I’m not sure what they were used for during the communist reign, when religion was outlawed.

There were street entertainers, ice creams, people with designer dogs. And always, just under the surface, in the back of your mind, the city’s troubled history. So much suffering. I don’t know how long it takes to forget things like that. 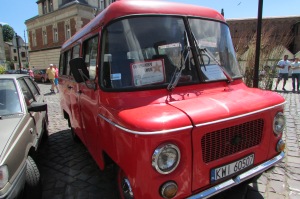 You could go on a ‘Communist Tour’! 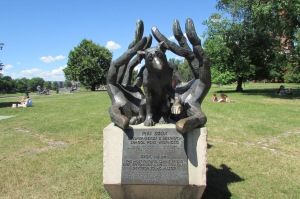 This dog waited a year for his owner (who had died.)

People-watching in one of the squares. 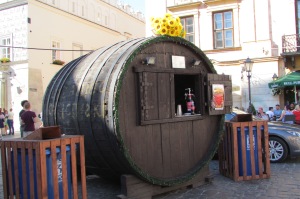 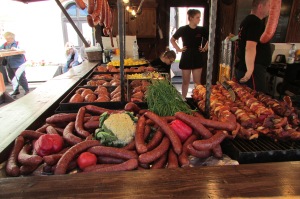 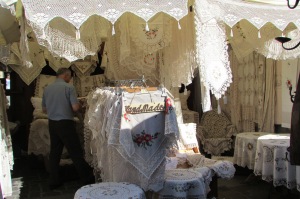 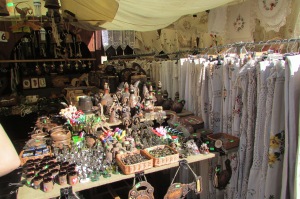 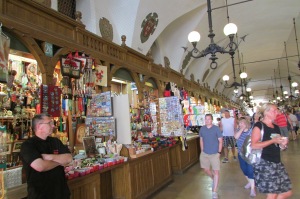