I’ve just read your article about Cromer. Love it, so many memories. I thought the photo of Dad looked exactly like Son 1. When I told him this, he said it was deeply disappointing – he has been hoping for a few years now that he might have been adopted.

It’s strange how fondly I now think of Cromer. I pretty much hated it when I was young. Cold damp tents, sleeping on hard ground, absolutely NO facilities other than a tap in the corner of a field because that was what Dad considered to be ‘real camping’. Personally, I never found the attraction of ‘real camping’, how I longed for a caravan! Since having children, we did once go to a camping shop, intending to buy a tent. But as we walked around, as I smelled the canvas and heard it flapping in the wind, so many memories rushed back. I couldn’t do it. I have promised myself I will never have to camp again. Not if I’m pretending it’s a holiday.

Do you remember the earwigs? There always seemed to be millions of them. We’d lie in bed listening to them climb the sides of the tent and pinging when they dropped onto the floor. Uncle told us they were called earwigs because they climbed inside your ears and chewed through to your brain. That story didn’t much help with sleep. It was so cold, some nights we would stuff all our clothes into the sleeping bag to try and insulate it a bit.

Then there was the year when we had a plague of ladybirds. I didn’t mind them so much, but they were everywhere, swarms of them, with their hard red bodies and little black spots. We used to count the spots and try to find one for each number – do you remember? (I can understand the attraction of Pokemon when I think of the games we played in the ‘olden days’!)

So, what are your main memories when you think of Cromer? For me, it would be walking up the hill to the zoo (is that still there? It even had a tiger I think, poor thing.) Then there is the church, of course (I included Cromer church in my story Counting Stars) I can still remember that smell of old wood and musty cushions, and there was a little bookstall at the back where we bought those cartoon books of the Bible. Most photos have the church in there somewhere, it’s almost what defines Cromer. There was the town centre, which was always bursting with too many people for the width of the paths and cars which were lost and trapped in the confusing one-way system. There were the ‘amusements’ on the prom, where Dad didn’t like us going to “waste our money” and Mum used to send us when it was raining!

But mostly, there was the beach – a lovely mix of sand and rock pools. Many hours watching sea anemones curl up when we touched them and crabs burying under the sand as we tried to catch them while the sea bashed the beach. It was always a rough sea. We pretty much learned to swim there didn’t we. Nice healthy mix of near drowning while gulping mouthfuls of diluted sewage! There’s nothing like swimming beyond the break waters and being lifted and dropped by great waves, and the water always felt warmer than the beach. I don’t recall many warm days at Cromer, though there must have been some. Swimsuits and cardigans with damp sleeves.

The food was pretty rough too. Tins of stew and dehydrated mash, cooked on that little camping stove. I loved the breakfasts, we always had bacon and eggs (with tinned tomatoes, which wasn’t quite so nice.) One year Dad found mushrooms growing and ate those, and I seem to think he found wild horseradish too, though I’m not sure if he actually ate that.

Once a year we would walk to the lighthouse, which was deeply disappointing as it was on the cliff, so short and fat. Not at all like the tall slender ones in my Blue Peter annual. The heather and gorse smelled nice though, and it always felt warm up there, the sandy cliffs absorbed the heat and insulated it I guess.

Mostly though, as you wrote in your article, Cromer was about family. It was about being teased by aunties about our navy blue knickers, uncles building us boats in the sand, Granny telling us stories, Mum taking us to watch the carnival, Dad helping us to sail boats on the little boating lake. Looking back, they were happy times. At the time, I just longed for a caravan! Life’s like that isn’t it, so hard to appreciate what is actually happening.
Enjoy your week.
Take care,
Anne x 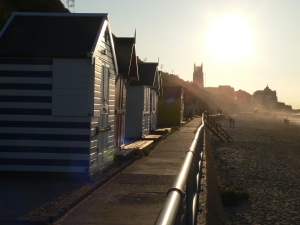 You can read my sister’s article (and see some excellent photos) here:
http://ruthdalyauthor.blogspot.co.uk/2016/08/cromer-sand-in-my-shoes.html

If you enjoyed this, why not buy my book? Gentle humour entwined with strong characters bumbling through life:

One thought on “Cromer – Letter to a Sister”