Breakfast at 9. Ate loads again. Then waiter appeared with fresh pastries so ate those too. Diet not going well.

Swam/read/sorted emails (still selling books in UK so have to check all going smoothly. Strange to ‘work’ on a holiday.) Sandwiches by pool. Looked around hotel and discovered there’s a bar with free drinks and snacks. Males view this as a challenge.

Drove into Old Town. Found easier carpark. Walked up to the ‘green line’ and showed our passports at border control. Walked through a deserted bit of road (the ‘buffer zone’. Wondered if the people who owned houses there had been compensated) into the Turkish section of Nicosia. It was VERY different. Almost at once we were in bustling lanes with crafts and trinkets spilling into the paths. It was exactly like being in Turkey. I bought some gifts, which I paid for with Turkish Lire left over from a previous holiday (D so pleased I had kept them in my purse for a few years.) I could have used Euro. Saw minerets of mosque.

Went to Büyük, which used to be an inn, is now a market. Males delighted I had found more lace and needlework to admire. Had drinks and sandwiches in the shade. Very hot.

Back through border, didn’t get shot. Drove back to hotel (slight Jimmy detour).

I read/slept. Others swam. There seems to have been a dispute with a Spanish woman, culminating in D’s beach ball accidentally hitting her in the face. Am hoping story has been exaggerated.

D decided we would eat in typically Greek restaurant listed in guidebook. Did not turn out as planned. Found correct hotel, but had trouble locating actual restaurant. It turned out to be next to the pool, which was very pretty with urns and arches and flowers. It was also shut (despite him phoning ahead.) We were told they were serving the full menu in the bar. They weren’t. Phoned another restaurant from guidebook, and were assured they were open. It was shut. Our call had been diverted to a different restaurant, in the same chain (but they hadn’t mentioned that.) This was a challenge to find. R used clever phone to mark exact position on map. J then directed us straight to marked position, which turned out to be a carpark in a dodgy residential area. Finally drove to correct place. Dinner was actually very nice. Cafe La Mode. Good food.

Returned to hotel. Hot chocolate and cards in lobby.

Big breakfast again (diet not what I was hoping.)

Checked out of Hilton. Reception gave gifts to me, H and R – nice thought, nice box, not entirely sure what it is – I think metallic pomegranite. Or tomato.

Driving through the border into northern Cyprus was fine (once we found it, is not signposted.) We bought 3 days of car insurance, because Cypriots won’t cover driving in the north. On the way, we saw a huge Turkish flag on the hills. Somewhat confrontational for the Greek Cypriots one might feel….

Arrived in Kyrenia. Hotel, The Colony, seems nice and is a short walk from the harbour, which is beautiful. R broke her room safe and it started beeping, so she removed the battery. Resourceful.

3pm lunch on hotel roof. Slow. Great view of mountains behind Kyrenia. Could see outline of castle my sister wrote about in her blog (which describes how high it is, so am not tempted to visit.) Males drank 1L glasses of Effes (local Turkish beer.) Am thinking whole afternoon will be slow. 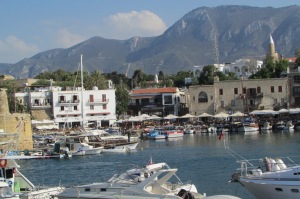 S adopted a stray dog, Gerald, who then came along on our walk. Reminded me of going for walks as a child with pocketfuls of biscuits and trying to entice dogs to follow me. Someone should buy him a pet…

Walked to Roman ampitheatre. Slightly renovated (the plastic chairs were a giveaway.)

Walked around town. Saw some stalls selling things they had made, or had found (looked a bit like an attic clear out in some cases). The people looked so poor in cheap synthetic clothing, and were trying so hard, straightening things made from beads to try and present them better, I felt uncomfortable. D gave me some local money so I could buy bracelets and scarf – not quite sure what to do with them, but felt better for having bought them. (Part of trying to live by the Micah verse:- What God requires is this: to do what is just, and to love kindness, and to walk humbly with your God.)

Tomorrow we hope to visit Famagusta – a town that was sealed off when Turkey invaded and has never been reopened. A sort of modern day ghost town. Am hoping we can get inside somehow, but just seeing the edge will be interesting. I’ll let you know what it’s like.