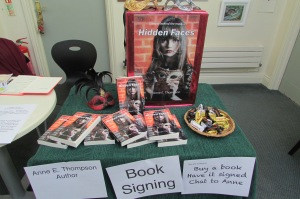 I have had my first book signing event. Terrifying. Well, it was terrifying beforehand. When I was actually there, everyone was very nice and I almost enjoyed it. A book signing is not an activity I would choose to do. However, if you are an author, and if you actually want to sell your books, you somehow have to market them. Book signings are therefore necessary.

I decided to link mine with the local community cafe. It’s run by volunteers, and was a good opportunity for them to entice some new customers through the door, plus they received 25% of the price of every book sold. In return, they gave me a pleasant venue and some free advertising.

I have to admit, I have never actually attended a book signing before. Nor do I collect autographs. The thing is, I think people, whoever they are, are just people. So yes, I have met some very famous people, I have even had some round for tea. They are however, no better or worse, or more or less fun to be with, than all my non famous friends. They are basically the same as you and me. So, to want their autograph seems weird to me. It also seems weird to me that other people now want me to sign their book. It’s not something I really understand, but I am happy to do it.

Being a complete novice, I took some advice on what to do. My sister was a big help, as were a couple of ‘author community’ Facebook groups I have joined. Here’s their advice:

Make the table look attractive. It’s worth taking a cloth, some sweets, some signs so people know what is going on. Some people suggested a vase of flowers – they must be less accident prone than me, I had visions of tipping water all over my books, so I decided against that one. The sweets are also only a good idea if you take ones which you don’t particularly like, otherwise, if you’re like me, you will eat them all while waiting for customers. I took some masks, as the book is about people hiding their true ‘face’ when at work, it shows how people are different when they’re at home or with their friends.

Take a pen. You might be surprised to hear that I nearly forgot one!

Remember your author name. This one is also surprisingly hard. When you’re tired, and have chatted to the nineteenth stranger in a row, it is very easy to sign your real name by mistake!

Take enough books. I had NO idea how many books I would sell. Other authors are rather coy when it comes to actually giving numbers (which is not very helpful when you are just starting out.) I would have been disappointed to sell 3, pleased to sell 10. I sold 16, with a further order of 10 more. No idea how that rates with an average non-famous, just starting out author – try asking a few and see if they will tell you!

Be prepared to listen. I found most people wanted to chat. Some people wanted to chat for a very long time. Mostly, this is nice, you get to hear about their lives and how they plan to write a book one day. It’s quite tiring though, so plan something low effort afterwards.

Advertise the event. This one is difficult. I can tell you what DIDN’T work! I handed out invitations at the school gate to nearly a hundred mothers as they collected their children (because the story is set in an infant school.) Not one came. I put it on Facebook. Same result. I put it on Twitter. Nope, not a soul.. The best advertising was word of mouth – people who had bought the book telling other people that they were going to buy another one. The local paper also advertised it, and I did have three people who came just because they saw it in there.

A few people arrived with books they had previously bought in the shops, for me to sign. That was nice, because they had read it and told me they had enjoyed it. Some people (and this is the best ever for an author) had their own copy and were now buying a second copy for someone for Christmas. That was so nice, made me feel glad I had been brave enough to hold the event.

Thanks for reading. Hope it was useful. 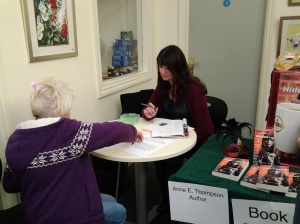 On Monday, I will tell you about my church…You know, “Onward Christian Soldiers..”?

Well, my church is more like Dad’s Army sometimes!
xxxxxx 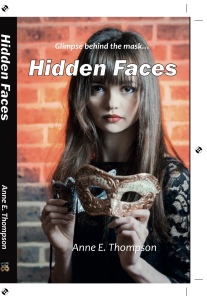