Arrived in Delhi. Had booked hotel car from airport, which was good, as taking a taxi would’ve taken hours. The government has withdrawn all 500 and 1,000 rupee notes, so paying for fare would have been difficult. The money exchange places at the airport had huge queues, they circled the baggage hall, round and round, full of tired people needing money.

I used the washroom at the airport. A young woman came into the cubicle with me, wiped the seat, then waited outside to turn on the tap and pass me a towel. I had no money to give her, none at all. Felt bad. I thanked her, but that won’t feed her family. Not sure how she will cope for the next few days, as even 100 rupee notes are now rare, she isn’t going to be collecting any tips for a while.

As we left carpark, I noticed a sign saying, ” No Sitting. No spitting. No cooking.” A group of men sat below it.

Delhi is noisy. All the tuktuks are green and yellow ( unlike Sri Lanka, where they were multicoloured.) Everyone honks whenever they overtake, which is often. Traffic is chaotic. We saw men in scrumpled shirts, scrubland with tents where people were living, cyclists pulling loaded carts, signs written in both Hindi and English. Street sellers walked between the cars whenever we stopped. There were old scooters with dented number plates, gated communities, and dusty trees in flower. The pollution here is severe, several people wore masks and there was a thick haze. You felt it at the back of your throat.

Arrived at hotel. The car was stopped at the entrance, and the boot and bonnet opened by guards. Then we drove up the driveway to the guards at the door. Our bags went through x-ray machines and we had to walk through metal detectors.

We checked in, and discussed the cash problem with the man at the desk. We had no small currency for tips (no one has.) He was very positive about the situation. He told us that everything in the hotel, including food and cars, could be paid for with credit cards, so it was no problem. He said everything would be sorted out in a few days, so it was no problem. He agreed that it meant no one could really shop in smaller shops, as even if we used high value notes to pay, they couldn’t give us any change, and there was now a shortage of the legal 100 rupee notes ( equivalent to £1.20 in UK money.) However, he said, it was nice for people to take a break from shopping for a few days, so really, it was good, not a problem at all. I began to feel like I was in The Exotic Marigold Hotel. Perhaps the culture here is like in Zambia, when they will always try to tell you what you want to hear ( so if you ask how far away somewhere is, you will be told ” not far”, even if it’s miles away.)

After a quick shower, we went for a walk, to try and change our worthless currency for new notes. The streets were busy, but not as chaotic as in Mumbai. We didn’t see any children beggars, and people didn’t touch us. Though they did stare. I got used to this in China, it’s not rude, it’s simply a different culture. There were lots of men hanging around. I wouldn’t feel comfortable walking around on my own (I would be tempted to wear a burka, like I did in Dubai, just to hide from their watching.) We were approached many times by people offering to help us. Where did we want to go? Did we want a tuktuk or a taxi? Could they help us find our way? It was hard to make them leave us alone. I think not many foreigners walk around – but we had been on a plane for hours and wanted to walk.

The path went through a covered walkway, which we walked through. As we left it, we realised it was the edge of a mosque. A man approached and told us we should have removed our shoes. Apologised, and explained we hadn’t realised what it was. He said if we didn’t know, that was fine, people would understand, but we should be more careful in future.

Found bank. Every bank we passed on the way had huge queues outside. We went to the Delhi branch of our own bank. We told the guards that it was our bank, and were shown to a different entrance. They needed to see passports – I didn’t have mine. They took copies of our visa and passport, and said they could exchange up to 4,000 rupees per person (£40). I waited while D changed his money – he was taken to near the front of the queue. Which was nice for us, but not really fair for the people who had waited in line for many hours. We can only exchange money once a fortnight. So we can return tomorrow and I can change some money, then we will have to wait until we’re back in UK. Hope they will exchange the old notes, have a feeling it might be difficult.

I am also concerned about what the lack of spending money means for the poor people here. At the moment, all the bank queues are peaceful. Can that continue when people run out of food?

Back to hotel (managed to avoid walking through any mosques). Dinner (spicy) and sleep.

I will tell you tomorrow what I have learned about why the money has been withdrawn so abruptly. 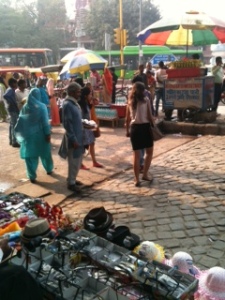 Thank you for reading. Why not sign up to follow my blog? Then you won’t miss what happens next in New Delhi….

One thought on “Arriving in New Delhi”