If you like monuments, you should visit the Taj Mahal. If you like seeing different cultures and people, the drive to Agra is fascinating!

Woke at 4am. The bed had jolted, so I assumed it was D returning (he sometimes wanders off at night, if he can’t sleep.) Sat up, and realised I was alone, then bed jolted again. Wondered if Delhi was having an earthquake. Located wandering husband and told him he should sit under table if there was an earthquake (which I know after doing online research following earth tremors when we were in Italy 2 years ago.) Husband looked at me as if I were mad. Went back to sleep.

Later, I looked online, and read that Delhi had felt tremors measuring 4.5 on Richter scale.

Car was booked for 7am. Arrived in lobby. Was told, “Yes sir, your car is ready. Please take a seat.” Waited for a while before driver actually appeared. I think, in India, it is considered polite to tell people what they want to hear. It is sometimes almost true.

Drove through Delhi traffic. This is a lot like dancing a tango, lots of tension and near-misses. Seat belts are a necessity. Drove on freeway to a toll booth. Everything completely stationary. Many people honked their horns (no idea why, but Indian drivers use their horns a LOT.) Several people got out of their cars and had a look around. Then the barriers opened, cars surged forwards, people ran back to their cars, avoiding all the lane changing traffic, we were off.

We drove through fields. Passed hundreds of chimneys in a brick making area. Passed green fields with neat crops, people working on ancient tractors or horse and carts. People walked with great sacks on their heads. When we left the freeway, the traffic became more eclectic. Oxen tethered on the back of a too-small truck, tractors pulling trailers stacked high with sacks, lorries with great mounds of grain. All the time bikes and motorbikes and tuktuks, weaving through the traffic, horns sounding.

The drive through Agra was another world. We crossed the wide Yamuna River. On the grassy banks oxen and donkeys grazed while people washed their laundry. Fields of linen were stretched out to dry in the sunshine. Pigs and goats wandered freely, while water birds floated on the river. In the town, the roads were a tumble of traffic, cows, people carrying sacks on their heads. And monkeys scampering across roof tops. I don’t know if the monkeys were introduced by people, perhaps one of the temples, but now they were everywhere. I didn’t entirely trust them when we walked around – they watched us with their clever eyes, darting behind walls then jumping up unexpectedly. It was us who were the novelty, the monkeys were comfortably free.

Left the car in the carpark at Taj Mahal. We had to leave bags in the car, though could take cameras and a handbag. Our ticket price included a bottle of water (which I didn’t trust enough to drink), a bus ride to the monument (though we could have walked, it wasn’t far) and shoe covers. If you don’t have shoe covers, you have to remove your shoes and leave them in an open cubbyhole.

The Taj Mahal is beautiful. Made of white marble, inlaid with precious stones that form floral patterns, surrounded by gardens and fountains. It is the tomb made for a loved wife of an historical ruler. She was the second wife (bit of an insult to the first wife) and she died giving birth to their fourteenth child (so I figure she deserved a nice tomb.) The entrance gate was engraved with an extract from the Koran, written in increasingly large letters as it got higher, so when standing on the ground, it all looks the same size. Clever.

All the architecture and craftsmanship was clever. But for me, there was no atmosphere. Perhaps you need to be the only visitor. I would suggest that everyone should first visit Huymayun’s Tomb, so you appreciate how it is meant to feel. But the photos are pretty….

Traffic at the toll booths.

Lots of milk churns being carried as we drove into rural areas. 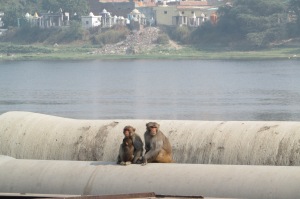 People washing laundry in the river. 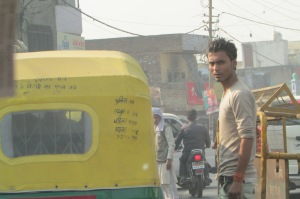 One thought on “From Delhi to the Taj Mahal”