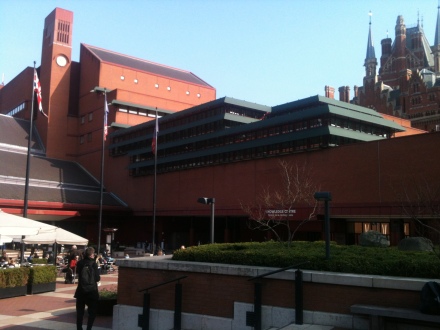 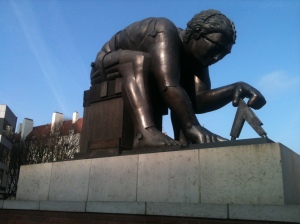 There are statues and sculptures in various places. Lots were donated when the current building was built. I expect that must be a minefield of diplomacy – where to place the extremely ugly statue that a wealthy benefactor has donated? Perhaps that’s why some are more visible than others. You don’t want to be the one in the staff toilets… Anyway, I have photographed a few, but the quality is bad due to my extremely old phone (which could be in a museum itself).

I was meeting a group of friends for a lecture about how the place of women in society can be seen in contemporary literature. ‘Contemporary’ means the last few hundred years, so it was interesting. I met the rest of the group in the foyer. There’s a bench there, in the shape of a book (like the ‘book benches’ that popped up around London in 2014). This one was metallic. When I walked round to take a photo in better light, I noticed it was attached to a ball and chain. Apparently the chain reminds people that in the past, books in libraries were chained (I’m guessing so they weren’t stolen). The ball represents the permanency of ideas – that once you have read a book, it becomes

part of you, you can never ‘unread’ it.

The books and pamphlets we were shown seemed to fit into three types:

There were those that accepted the role assigned to women in the past, the domestic science books, the recipe books, the ones advising women married to colonial workers in India how to manage their staff. There were some lovely cookery books, the older ones had fairly random capital letters, because they had been printed before their usage was standardised. I was allowed to photograph pre-copyright books, so I hope you can see this one. They wrote ’s’ as ‘f’. Until 1845, they didn’t make a list of ingredients in recipes, as they weren’t expected to be followed like they are today – they were for women to read and learn.

Then there were the books protesting the roles designated to women. The literature by the suffragettes, the books ridiculing the sexist books by men, the play refuting that women should be degraded. There was a lot of this defensive literature, encouraging women to rebel and defend themselves. Some of it was about the right to control fertility – and one had a photograph of a poor woman who had eleven children, all alive. She looked tired.

Finally, there were the books, written by women, that simply broke the mould. These were brilliant. The Woman and the Car by Dorothy Levitt (1902) was one of these. She was the first British female racing driver. Her photograph showed a wealthy, attractive woman, and her book showed she would have been lots of fun. We weren’t allowed to touch the books, which was a shame, as I would’ve loved to read this one. It was open on a page that began: “If you are going to drive alone in the highways and byways it might be advisable to carry a small revolver”. There was a picture, showing a secret drawer under her seat, where the revolver could be hidden. She also wrote, “If you are driving alone, a dog is great company.” It was thanks to Dorothy that cars now have rear-view mirrors, as she advised women drivers to keep a hand mirror next to them, so they could see what was behind them without having to turn round.

It was an interesting lecture, followed by interesting chat. We were all women, so we (of course) started to discuss how women are treated in society today. In many ways, we are now considered to be equal with men. Yet Joanna Rowling was still advised to use her initials rather than her name when publishing Harry Potter, because some men/boys do not read books by women. There are still echoes of sexism in modern society – and of course, in some cultures, not much has changed and women are still basically ‘owned’, with very few rights. However, someone mentioned an art exhibition, which only exhibited women’s work. For me, this is too much. I am a woman, but I would want my work exhibited because it was good enough, not because I was woman. I know that companies now must consider the balance of their employees. Again, I would want to be employed because I was the best candidate, not because I was a woman, or foreign, or a certain religion. I’m not sure society has the balance quite right yet….

One thought on “The British Library – Women and Literature”