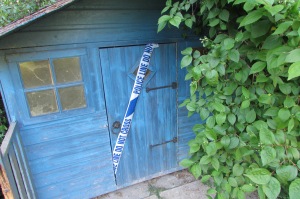 What do you keep in your shed? Bikes? Old chairs you will mend one day? Flower pots? I keep a Dead Bag in my shed – which my children find deeply disturbing. I should clarify, before you phone the serious crime office, it does not contain body parts. Well, not human ones anyway. You see, if you live in a town, you probably have a romantic image of springtime in the country as being full of new life, beautiful flowers, chicks, blossom. Which it is. But it’s also full of death, much of which I have to clear up. And there’s lots of it, so it’s easier to keep a bag in the shed, which I hygienically dispose of at regular intervals, than to triple bag every single corpse that appears.

As I say, lots of dead things. There are the bodies that have been killed by predators. The Springtime is when foxes go a bit bananas looking for mates, so they cast caution to the wind and will even run through gardens which have a big dog living there. Which results in a quick massacre of any ducks before said dog arrives and chases them off. Then there are the cats, who leave regular dismembered rats and mice and baby birds for me to clear up. And because it’s Spring, lots of baby birds are hatching, which the crows and magpies catch and carry off, but sometimes drop mid flight, so I have to clear up those.

Baby birds themselves are pretty fragile. Ducklings frequently die for no apparent reason soon after hatching, or die mid hatch. Plus there are the eggs that never get as far as the hatching stage, so are abandoned in the nest with a dead duck inside. All of which go into my Dead Bag. So you see, it’s not such a bad idea to have one, as long as it gets emptied regularly (otherwise it stinks. I know what death smells like – sure to be useful at some stage in a novel.) Worth remembering before you buy that country cottage or go to live on a farm; new life also tends to entail some gore or death. (There is a sermon here, but I’ll let you work it out for yourself.)

I have to admit, I have felt pretty near to death myself this week. I’ve had a nasty cold – aren’t they just the worse? You know it’s nothing serious, but everything aches, your nose won’t stop running, sneezing makes you dizzy and you feel wretched. Even my teeth itched, so I wanted to chew my gums. Most unpleasant. I decided to give myself an easy day and stay in the warm and watch Netflix all afternoon. I scanned the options and decided to watch ‘Survivors’, as I’d missed it when it was shown on telly and it looked interesting. Bad choice. It began with scenes of everyone in England catching flu and then dying. I began to fear my Dead Bag wouldn’t be big enough! You’ll be pleased to know I am recovering nicely, but I’ll let you know if things deteriorate.

To be honest, I can’t really complain, because Husband has been a huge help. I asked him to buy some tissues and he came home with both a box of tissues and lots of information. I now know the exact size and price of each individual tissue in every box sold in Morrisons (I know you’re dying for this information, but I’m saving it for another blog. In another life.) He also cooked dinner. This involved removing pies from the freezer, reading the instructions and placing them in the oven. It also involved a complicated time-plan, compiled on the computer using an Excel spreadsheet. Impressive – why have I never thought of doing this myself each day?

Have a good week.

One thought on “The Dead Bag”