Ah, the problem of what to wear. I had been invited to London, which is pretty much a foreign country as I go there so rarely. I knew the day would involve some walking, then a lunch in a posh dining room – so what should I wear? I was fairly confident muddy jeans and wellies weren’t appropriate. Perused wardrobe and began sorting outfits. In the end, I was restricted – in both senses of the word – by finding clothes that actually fit. My weight tends to fluctuate (joys of being an older woman) and I’m having a ‘fat tummy phase’. I eventually leave in a too-tight skirt and a silk blouse that gapes. I carry heels and wear flats. I so wish I was a man sometimes.

Arrived in Grosvenor Street, where we were meeting, on time. Nice walk from Victoria. We then met our guide, Cindy, who gave us a quick introduction. The plan was to visit a few shops in Savile Row and Jermyn Street – tailors to the rich and famous. No, we weren’t shopping (phew) we were having a tour. It turned out to be very interesting. 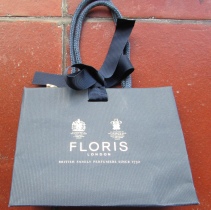 First stop was Floris, one of the oldest perfumeries in the world (apparently). We met Edward, who is the 9th generation of his family to own the shop. They have 17 royal warrents, and we saw the ledger showing the perfume the Queen orders (she pays by cheque or postal order). We also smelled the perfume that both Winston Churchill and Eva Peron wore (I didn’t much like it).

We were invited into the back room, where a lady with lilac coloured hair described the bespoke service the shop offers. As we stood in the old, low ceilinged room, surrounded by glass cabinets from a former age, I felt like I’d walked into a Harry Potter film and was choosing a magic wand.

For a mere £450, you can have a 2 hour appointment with Madam Lilac Hair (not her real name) and design your own perfume. She used lots of phrases like “main notes” and “complementaries” to describe the process, which starts with 60 different bases.

The perfume should be kept in a box, and preferably in the fridge. It should last for a year, after which time, the alcohol base starts to ‘go off’ and smell bad. (I didn’t tell her that I have perfume from about ten years ago).

As we left, I was chatting to the guide about the perfume Marilyn Monroe wore. She sneaked me into a side room, opened a drawer, and sprayed some on my wrist. How exciting! I feel very desirable now….

We then popped to Turbull and Asser in Jermyn Street – the makers of bespoke shirts for royalty. They showed us how they use patterns drawn on brown paper, which are then sent off in “shirt bags” (which are really just big envelopes) to a factory where they are digitalised. Their customers include Charlie Chaplin, Churchill, and a certain American president who asked for them to be made without the label, so no-one would know they were made in England!

All the shirts are cotton, and they don’t glue the fabric to the stiffener in the collar, as apparently this shortens the life. (Someone needs to tell Mr M&S that. Or perhaps they have…) It costs £255 for a shirt, but a new customer is expected to order at least six.

Next stop was Gieves and Hawkes (pronounced with a hard ‘g’). They make both made-to-measure and bespoke suits. (Made-to-measure is fitted onto a basic block, and the customer then has it fitted and chooses the fabric. Bespoke begins with brown paper, cut into a pattern.) A bespoke suit starts at £6,000 and will take 12 weeks.

We were taken upstairs to the archive room. Glass cases ran along one wall, filled with the red coats and gold helmets of the Queen’s bodyguards. They make, maintain and fit the uniforms. We were allowed to hold a helmet, which was surprisingly light (it’s made from brass and coated in gold, with a gold filigree pattern moulded on). We were told not to take photographs (shame) as they would be fired. The red coats are made from a heavy wool cloth, so it doesn’t warp when the epaulets and sword are added. They must be boiling hot to wear, and summer is a busy time due to garden parties and state visits (the next one is a visit from the Prime Minister of Spain). The uniforms are worn 12 times a year, and you have to be a rank of major or above to be body guard to the Queen. 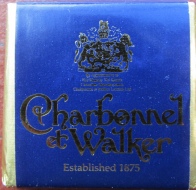 Our final stop was Huntsman, who make hunting clothes. It was the shop that inspired the film “Kingsmen”. We arrived in the reception area, which had heavy leather chairs, newspapers, chocolates and drinks, and peonies in a vase. All very dignified. Below us, 14 people were working in the basement, making suits for people like Nicole Kidman and the royal family.

Actually, these places aren’t called ‘shops’. A little history: in 1666 there was the great fire of London. Afterwards, everyone was very keen to blame the French (English people still like to blame the French for everything. It’s not considered racist, though I’m not sure why. Perhaps because they once beat us up and we have very long memories.) Anyway, King Charles II wore French fashions, lots of frills, and this was politically a bad move. So he switched to an English made suit, which included a waistcoat. Yep, the first three-piece suit was apparently Charles II’s fault (even though Husband assures me only Germans wear waistcoats today.)

Anyway, following this, the coffee houses grew up. Men met, and instead of getting drunk, they became stimulated (all that caffeine) and began to plan insurance companies and such like. They regularly met their friends for coffee, and discussed business; but sometimes, someone would arrive who they didn’t like. So they created a membership system – hence the birth of gentlemen’s clubs. As lots of men were gathering in a fairly small area of London, there also grew up brothels (a surprising number for the area under discussion.) The place then became almost exclusively the domain of men, and women of a certain profession. As the men walked between the clubs and the brothels, they went along Jermyn Street, so it became the place that high class tailors set up shop. They then wanted to expand, into Savile Row, but that was an exclusive residential area, which didn’t want tradesmen. So the tailors had ‘houses’, not ‘shops’. Not everyone was invited to buy from them, and at one time, you needed two letters of introduction before a tailor would see you.

However, I found everyone to be charming and helpful, and very happy to show us round and explain things. I expect it was because I smelled like Marilyn….