I was pleased with Hidden Faces as a book. It is a ‘gentle’ story, one to make the reader smile, with characters they would recognise. A book you could give to your aunty. JOANNA however is different. It is grittier, faster paced, and delves into how people react in very extreme situations. It will, I hope, have much wider appeal.  So I would like a publisher to take it on. Which means I need an agent to approach one for me (because in the UK, mere writers are unable to speak to publishers, they will only work through an agent). So, I sent my manuscript to a few agents. Not many, because I am fairly fussy still, and if I only ever sell the books I have published myself, it doesn’t really matter.

In October 2016, I posted (yes, posted – they don’t take emailed submissions) my manuscript to David Higham Associates. They are the agents for The Girl on the Train, which is a book very similar in style to JOANNA. So I thought they might be willing to represent me. I read all their submission requirements and sent (by post) everything they required. Which was both costly and a hassle. As they had stipulated that I should include a stamped addressed envelope, I fully expected a reply. Even a standard, thanks but no thanks, reply. But no, nothing. Is this agency running a scam to obtain free postage from desperate authors? These are the actual emails I subsequently sent.

I posted a submission to you, as per your instructions, in October 2016. As this included a stamped addressed envelope, and I have not yet heard from you, I wondered if perhaps the manuscript had become separate from the postage (which you said sometimes happens.)

My submission is a thriller, entitled JOANNA, by Anne E Thompson.

Please could you check and let me know if this is still under consideration, or when I might expect to hear from you.

Thank you for your help.

I posted a submission for your consideration in October 2016. A novel called JOANNA – the story of a psychopath, by Anne E Thompson. It was written after extensive research on the condition of psychopathy, involving in-depth reading of books and papers by neuroscientists. I interviewed both psychopaths and their families, and spent many hours listening to convicted serial killers. I now consider myself something of an expert on psychopathy. I wrote the novel in the first person, giving the reader insight into how a psychopath views the world. I also showed how her family felt, what it is like to love a psychopath and how one copes with the aftermath of their actions. It is an easy read work of contemporary fiction.

As I said, I now consider myself to be something of an expert. In fact, I was interviewed this week by a journalist from the local newspaper, and have been asked if I would be able to speak on both Meridian Fm and BBC Radio Surrey. People are very interested in psychopaths – and I hope JOANNA will be a popular novel. Which brings me to my reason for emailing. When I submitted my manuscript, I included a stamped addressed envelope, as per your instructions. I assumed this meant you would be posting, at the very least, a standard reply. But alas, no such letter has been forthcoming. I am hoping that by now you have managed to read my submission, have loved it, and are in the process of making an offer to represent me. I am assuming this meant you were too busy to reply to my email of January 2017. I trust therefore, that I will soon receive my letter, in the envelope provided.

I look forward to hearing from you.

Every day when the post arrives, I rush to inspect the envelopes, which lie in a muddle of dirty shoes and discarded socks (I have sons). I am searching for a slim white envelope. The white envelope which I stamped and addressed myself, one day way back in October. Actually, I know the exact date – I posted it to you on 26th October 2016 – but I’m trying to appear casual. I sent it with the first few pages of JOANNA, which were double spaced as requested, a synopsis of the novel (which is very similar in style to The Girl on the Train) a CV, and a covering letter. You see, I had read your instructions very carefully, I am that kind of person. Thorough.

However, every day I search to no avail. Your reply has not arrived. I have since sent you a few emails, hoping to jog your memory, to perhaps spur you into action. But no, it seems I am destined to remain ignored. Not even a standard letter has been forthcoming. I admit, I am no longer expecting a response from you, and my reason for writing is to ask for your permission to use these emails on my blog. They illustrate so wonderfully the sort of things – or rather, lack of things – that a new author can expect when struggling to find their way into the world of publishing. Given your inability to reply thus far, I will assume that unless I hear otherwise, I have your full permission to use my emails to you, on my blog, and in other areas of social media. I will publish them, probably at the end of March.

March will be a good time to publish them, as it will coincide rather nicely with the launch of JOANNA. Whilst waiting for you to not reply, I have not been idle. My manuscript has been edited, and was then passed to a typesetter, who prepared a file for the printer. I commissioned a talented young photographer to produce a cover (see below) and now have a book. It will appear in bookshops shortly, and these emails can become part of my advertising on social media. Should you have a change of heart, I would still love to hear from you. I very much hope that people will enjoy JOANNA, and that my sales figures will rise accordingly. As I discovered with my previous books, the supplying of books to shops is time-consuming. I am currently writing my next book, and if you felt able to represent me, to find a mainstream publisher who could reprint JOANNA and make it available to a wider audience, that would be wonderful.

I have of course, pondered on the reasons for your lack of reply. Possibly, you lost the envelope. More likely, you have sufficient clients already, and simply ignore all new submissions. There is also the slim possibility that you are running a postal scam. My research for JOANNA has involved many hours studying the behaviour of psychopaths. To manipulate vulnerable people (new authors) into certain actions (sending you stamps) for your own gain (selling said postage for a profit) would of course, fit the psychopathic profile rather well. However, if I’m honest, the thought of David Higham being a mere front for a little man in an office steaming stamps from the front of envelopes, seems unlikely. I will therefore assume you are simply too busy to reply.

It has been lovely chatting with you.

Yours, ever hopeful for a reply,

PS. I attach the planned cover of JOANNA, to help you to consider the possibilities awaiting.

The agent has missed out on JOANNA, but you don’t have to! 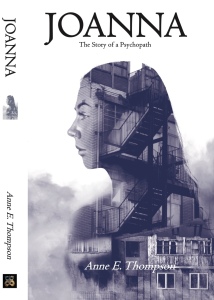 3 thoughts on “Letters to an Agent….”