Day One : Munich to Austria

Car arrived 5am. Everyone ready -unexpected -maybe some of them didn’t sleep. Flew Heathrow to Munich, all went smoothly, and everyone managed the automatic barriers. Eventually.

Collected minivan, and drove Munich to Salzburg. J made redundant from map reading due to rather efficient satnav.

Arrived at Sheraton at Fuschlsee, a lake near Salzburg. Staff at reception predominantly female, wearing national dress, which does make them very buxom. Impossible to avoid mainly noticing bosoms. H told M not to wear his glasses while we’re here.

Dinner in expensive hotel restaurant. Lots of antlers on walls, candles, flowers. Nice meal, but tired (me, not meal.) 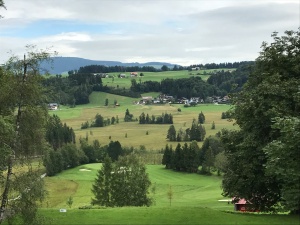 Everywhere here is SO pretty.

Nice breakfast, though I had problems with coffee machine and covered surrounding area with milky froth -rescued by very nice waiter who collected me a mug of coffee.

Drove to Hallstatt. Traffic terrible and nowhere to park, so we abandoned Husband and car, and walked into town. It was full of Chinese people, really full. Coach loads of them. All the signs were written in German and Mandarin, so clearly a regular occurrence. Also full of extremely expensive souvenir shops. Followed signs with a skull on them up a mountain (J in flip-flops, but still faster than people in hiking gear). Signs took us to a cemetery.

Found Husband and ate lovely homemade pizza for lunch. Read guidebook to try and find out significance of skulls and cemetery. Read that apparently, cemetery is very small – due to being half way up a mountain, so when it was full, someone had the good idea that they could dig up the old corpses and replace them with the new ones. Honestly, this was the solution they decided on! Did anyone object? Was there a committee involved? Anyway, this is what they did. While the bodies were waiting to be buried, they decomposed, and the bones were bleached by the sun. The skulls were separated from the other bones, and they are displayed in a side chapel. We HAD to go back and look. There they were, bones stacked neatly, skulls decorated with the name and patterns. Brilliant!

The rest of Hallstatt is also interesting. Lots of cute cottages clinging to the mountainside. Too many tourists and over-priced shops, but well worth a visit.

Dinner in Fuschl. Parked in large town car park, returned after dark, and didn’t know how to pay. Husband set off in the dark to investigate, we sat in car, then decided to send S (largest male) to protect him. S detoured via barrier and tried to lift it manually. Worried he might break it, Husband would return with paid ticket but we’d still be trapped due to broken barriers. R worried there might be zombies (so glad she’s 25 and works in a bank – easy to forget that sometimes). D returned, barrier worked, all good.

Arrived safely back at hotel, despite best efforts of suicidal deer on dark road. Nice day. Tomorrow we plan to visit Salzburg (which is very exciting, as it’s where they filmed The Sound of Music – because it’s where the real family actually lived.)

Why not sign up to follow my blog? Tomorrow I’ll tell you what we saw in Salzburg.

If you like to laugh, why not read Invisible Jane by Anne E Thompson?
A love story with funny bits!

Available from an Amazon near you…..