I didn’t go to the gym today. Breakfast was in a huge room – busy, but a good selection of food. It was very different to the Austrian buffet (for example, there they had slices of melon and a fruit salad; Slovenia offered whole peaches and apricots and plums, which you peeled and cut yourself.) Coffee was rough. The whole hotel has a different feel. It has a sort of faded prettiness, but it somehow feels less ‘classy’ less ‘safe’, than Austria. I like it, but feel more cautious.

Family made a plan for the morning. We wanted to see the Dragon Bridge, the Cobblers Bridge, a church, and a market. So Husband decided we would go to the castle. (Not complaining, just saying….) Actually, to be fair, the walk to the castle did include all the other stuff. The Dragon Bridge is from the legend of Jason and the Argonauts. The market doesn’t sell cushion covers, but has the biggest tomatoes ever. It also has a ghost, which only very good people can see, who watches over the market square.

The way up to the castle was by funicular. You can either queue for 15 minutes to buy the tickets, and then queue again for a further twenty minutes for the next funicular to arrive, OR one person can queue for tickets while everyone else queues for the next car. Hence avoiding time standing in hot sun. But stroppy Slovenian women who didn’t think of doing that hiss at you.

The castle is boring. Most castles are boring (but males have a strange need to visit them, in the same way as they HAVE to climb towers.) This particular castle was also very full of tourists. (It was probably nicer under communist rule – if somewhat less friendly.) The castle used to be a prison. Some cells had a window, and the best views of the city. Other cells did not. I don’t think I would’ve survived 10 years in a stuffy stone box. If you do visit, then the water costs less in the gift shop than from the ice cream lady in the courtyard. The walk down from the castle is along a slippery gravel path. It has good views, but you can’t look at them or you’ll trip over a root and plummet to your death. Probably. 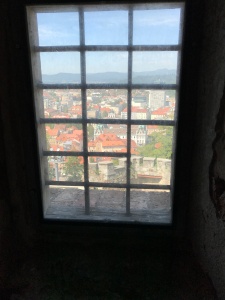 We ate lunch in a BackWerk, which is a sort of ethnic Costa where you make your own coffee from a machine (but it has nice sandwiches). It’s too hot for food really.

We walked to Tivoli Park via a couple of churches and an ice cream cafe. The churches had a lot of gilt, the ice creams were nice. Saw the Parliament building, which is a boring square building, but has interesting sculpted figures around the door. They represent the Socialist ideal, of everyone striving together.

The park, when we had slogged there through the afternoon heat, was not worth visiting, I thought. But perhaps I was just too hot.

Ljubljana is pretty, it reminds me of Bruges. It is nice to visit for a day, but it felt weirdly insubstantial. If you took away the cafes and chocolate shops, I’m not sure what would be left. I never managed to see the ‘real’ part of Slovenia.

Tomorrow we drive further south, and to Croatia.