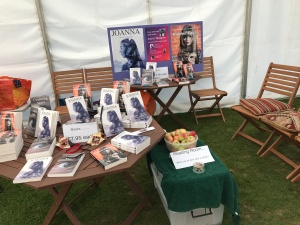 So, I survived the festival at Hever Castle. Three whole days of selling (not my favourite activity). I’ve never done a big festival before, so was unsure of what to expect. Mostly it was good.

I did of course have help. Mum came, and did a brilliant job enticing people to buy. She had her new phone with her, and took lots of photos. Son 2 had shown her how to use it (it’s a smart phone – too smart for me.) Unfortunately he didn’t also teach her what to do should it fall out of her pocket and into the next cubicle when using public loos! Luckily the nice person next to her slid it back under the partition, and she didn’t get accused of trying to take dodgy photos.

Husband came too, and turned out to be an excellent salesperson – even if some of his methods were somewhat unethical. When someone is clearly having trouble controlling a very strong dog, is it okay to whistle, so the dog runs to your stall pulling the owner behind them? Not sure (but we did sell her a book). And if a coach-load of ladies from Holland arrive, to look at the quilting show, is it okay to sell one a book, even though she doesn’t actually speak much English? And I’m also not sure about the : “Would you like an apple? If you bring your Mum here to buy a book, you can have one,” technique, used on small children – but again, it made a sale.

I’m not quite sure what my mum’s selling technique was. But she would disappear with a book (perhaps to have lunch, or to use the loo) and after a while, someone would approach my stall, saying they had bought the book from an elderly lady, who had told them I would sign it for them…..Exactly how you manage to sell a book whilst in the loo is beyond me!

I was sent the instructions for when to arrive, the code for the back entrance to the castle (very exciting!) and a plan showing where my pitch was. It was a big area. We arrived fairly early, to find several people were there already. We were in a marquee, and because the day before had been wet (when they put it up) there were constant drips of water from the ceiling. People who do this event every year (which seemed to be most people) had come prepared with towels and mops and sheets of plastic to cover their stock. I had not. It was all a bit stressful, as a book that has been dripped on would be ruined. We set up the tables, and left all the books and bookmarks in plastic crates, hoping the drips would eventually stop. They did. 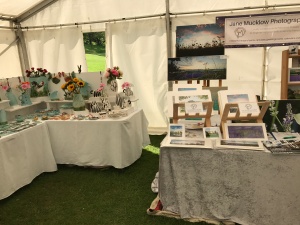 Most stall holders were very nice, and they all seemed to know each other. A few were a bit territorial (we had all been allocated a 3m square, and some used the whole width for their own stall, and then expected to walk through their neighbour’s space when they wanted to walk around, meaning their neighbour had to have a smaller stall.) I guess everyone had spent hours making their products, and were keen that it should be shown at its best. I overheard a few tense conversations about the positioning of stands. 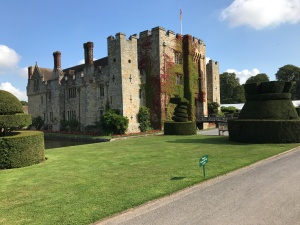 However, the absolutely best thing of all was being at Hever Castle. We arrived early each morning, when the grounds were empty. The grass was damp, the sun was not too hot, and the swans were wandering along the bank. All I needed was a swooshy skirt and a horse. It is a beautiful place. Anne Boleyn grew up there, and you can’t help but think that she’d have been so much happier if she’d just stayed there and married a farmer. That’s what I would’ve done.

If you’ve never visited, put it on your list, it’s lovely.

4 thoughts on “Handmade and Homegrown Festival at Hever Castle”