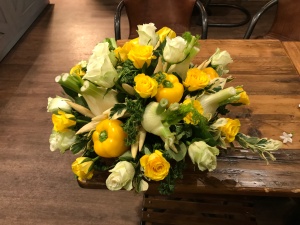 I was invited to an event at Knights Garden Centre. I wasn’t quite sure what it entailed – something to do with autumn and I needed a ticket. As my life has been rather solitary lately (writing books is not a social activity) I was very glad to go out. It started at 7pm, and I was late. This wasn’t my fault, since my operation I often have weird lights in my eyes, like the aura before a migraine except I never get the migraine, but it means I can’t drive. So I had to wait for Husband to come home and drive me.

Anyway, I hurried to the right place, and found a group of people in the coffee shop, with a man at the front arranging flowers. He was rather clever, because he somehow managed to create a couple of fantastic autumn arrangements without really looking at what he was doing. He was very entertaining, and told us about arranging flowers at Prince Andrew’s wedding, and other major events. He then sort of threw some pears and grapes and pomegranates onto a table, and suddenly, there was a whole beautiful table setting.

We were given fancy snacks, and then the flower man (I can’t remember his name) called out ticket numbers and the chosen people were allowed to take home an arrangement. I won. Wow, I rarely win anything. I carried the huge arrangement out to where Husband was waiting, and told him that the evening had been a workshop, and this was my arrangement. He didn’t believe me – he has seen my attempts at arranging flowers before. My sister inherited all my mother’s clever flower arranging genes (the only time I ever arranged the flowers at church, my mother got there early and rearranged them before anyone saw).

As I write this, I have all the taps in the house turned on, and water gushing down pipes, in an attempt to clear them. Mr. Blocked-Drain-Clearer is here.

Whist trying to find out why the drains are blocked, I tried looking online. I discovered that coffee grounds can block drains. Did you know that? I didn’t. There is one person who disagrees, who wrote that coffee grounds act like sandpaper and actually clean out the drain. But that was offset by about three hundred people who said you shouldn’t tip coffee grounds down the sink, as they mix with fats and block drains, as effectively as concrete. This is annoying, as it’s very easy to sluice the grounds down the sink, and rather a bother to go and tip them on my roses (apparently roses like coffee – who knew?) Ugh, sometimes life is a hassle. But perhaps I will now grow beautiful roses to use in my flower arrangements. 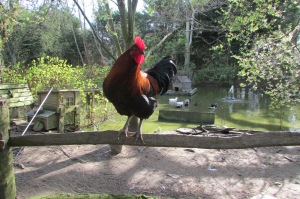 Another problem (though not stressful) is my chickens. Now, in case you don’t know, chickens put themselves to bed when it gets dark. So every morning, I open the door to their coop and out they run (I don’t like animals in cages). They spend the day happily digging up Husband’s plants and scratching the dirt under the trees looking for grubs. Then, when it starts to get dark, they go back to their coop, fly up onto their perch, and I shut the door so Mr. Fox can’t eat them during the night. The problem is that sometimes I want to go out before it’s properly dark, and I won’t be home until late. (I am always pleased when the clocks go back, because the chickens go to bed earlier!)

I thought I’d solved this, by training them to come when I whistle. I started giving them treats (grapes) and whistling, and gradually, when I whistled, they learned to come running to wherever I was. So do all the cats and the dog, but I can ignore them, and shut the chickens into their coop. Unfortunately, the silly birds now associate me with treats. So sometimes, after they have already put themselves to bed, I go up to shut the cage door, they hear me coming, and rush out of the cage hoping for a treat. I have tried explaining that actually, the treats are only when I whistle, and only given when they are actually IN their cage. But they won’t listen. Chickens are silly birds.

However really, I have no cause to complain about anything. Tomorrow I am going to a fashion show. All the models have been victims of acid attacks. They feel it is time to stop hiding their disfigurements, they want to show they are not ashamed of what they look like. I expect it will be a moving evening, and will help me to sort my own priorities a bit better. I’ll let you know next week what it was like, and who I meet – there are a few celebrities attending.

You can watch the show online :

Hope you have a problem-free week.

Families are the same, whatever the century. Counting Stars follows a family a hundred years from now.
Counting Stars by Anne E. Thompson – a thriller for the intelligent reader.
UK link below: