We decided to walk from the bottom of Manhattan up to Central Park.

The weather was clear and bright, we were still on UK clocks, so after a 6am breakfast in Westway diner (614 Ninth Ave) we hailed a cab and set off.

There was some confusion when we tried to explain to the taxi driver where we wanted to go. I wanted to start at ‘The Charging Bull’, so we gave the street address, which he didn’t recognise. I remember being caught out by this before – in London, a black cab driver knows every street in London, but in NY, you sometimes need to give directions. Eventually he worked out we wanted the “Wall Street Bull” (even though it isn’t on Wall Street) and we were taken to the right place. He was then quite chatty, and suggested we walk across Brooklyn Bridge.

Although we have visited New York many times (we used to live here – though that was about 20 years ago now, which I find slightly scary) we have never walked on the Brooklyn Bridge. (We did most other things, and visited the World Trade Centre and Liberty Island about 1,000 times, because all our UK visitors always wanted to go there.) So, we set off. We walked past Seaport, and after a slight David-detour, we found the pedestrian access to the bridge. It was still early, and lots of keep-fit types were running across the bridge, looking very intense with their fitness apps and running gear. We tried to keep out their way, and wandered across. Brooklyn Bridge has some of the best views of the island, so was worth visiting just for the photo opportunity. Though some people do take an incredibly long time composing their photos, even when it’s just taken on a phone (just saying).

We then walked up the island, through the different districts. I love doing this, as you get a real flavour of the cosmopolitan place that is New York City. Past City Hall and Foley Square (very like city of London) through China Town, into Little Italy, up through NoHo, to the Flatiron building. Then we got hungry, and went back to a very crowded Westway diner for lunch (everyone else was eating breakfast). According to my phone, we walked 18km.

Lafayette Patisserie is a nice place to stop. I hope you like the hat. It got a surprising number of comments, all from Husband, all derogatory. Have put ‘new hat’ on Christmas list. NY is cold though, you need a hat.

The next day we walked the length of Central Park. We could have spent hours in there, wandering around, it’s huge. In the past we have taken a boat out on the lake, or visited the zoo, and when the kids were young they used to climb over the Alice in Wonderland statue. It brought back lots of memories. (And was 15km.) 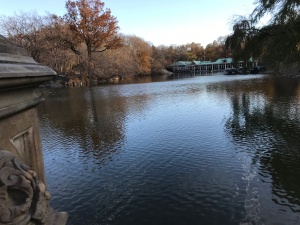 My last day, we decided to walk across the island, to see Roosevelt Island. On the way, we passed a large glass window, into a large room with about 20 dogs, and a girl throwing a ball for them. It was a doggy day-care centre. I’m not sure Kia would be impressed, but it looked okay actually if you have a sociable dog.

We walked past the United Nations Building, which I remember as a completely different building, so think I must’ve labelled some old photos wrongly. It all looked rather foreboding, with lots of security.

We also saw a giant inflatable rat, which the unions put outside buildings that they deem to have bad working conditions.

We saw Queensboro Bridge, which goes over Roosevelt Island, but doesn’t stop on it. There was a cable car, but I hate cable cars and refused, absolutely, to go in it. Husband was understanding. In return, I went into Home Depot with him (used to be his favourite shop when we lived there. It’s full of man-stuff). We walked passed Carnegie Hall, along E59th, along the bottom of Central Park. We bought coffee and bagels for lunch. 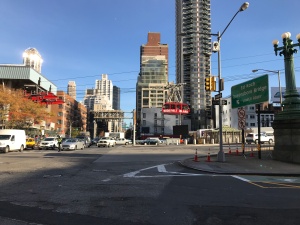 I flew home the next day. I love New York City, it’s a city you can visit many times, and usually find something new to discover, or an old memory to revisit. There’s always lots to do, shows to see, galleries, museums, restaurants….but best of all, I think, is simply to wander around.

Thank you for reading.
You can follow my blog at: anneethompson.com