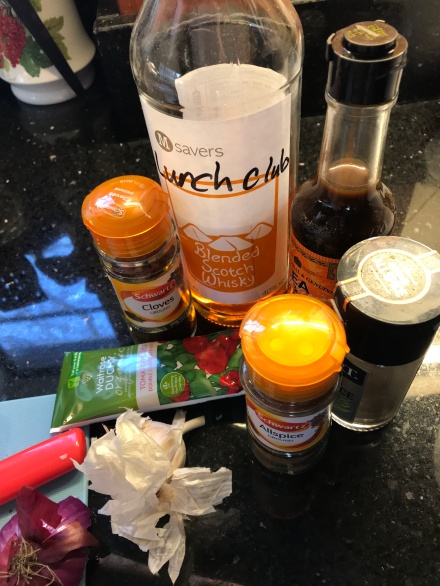 Today was just a normal day. I will tell you about it (because spying on other people is kinda fun, isn’t it!)

Got up, and sorted the ducks and chickens and fed the outside cats. Lots of signs of nest building, but no actual eggs, so either rats got there first or the hens are just pretending.

Had coffee, cake, and Bible time. My favourite bit of the day. (I make a very complicated cake which is made with sour cream, so it isn’t too sweet, and has a crushed pecan and maple syrup stuffing. It takes ages to make, so I hide it in the larder, and never share it, and only ever eat it – one slice – on my special Portmerion plate with the fuschia pattern – at coffee time.)

Shopping order arrived. It’s my turn to cook at Lunch Club, and usually I would shop in Morrisons, because it’s cheap, but this week has been hectic, plus I keep having chest pains, so I decided to keep things simple. It costs more, but there will be a dinner at the end and I might survive. This week I decided to make Shepherd’s Pie. I use the term loosely, as it is made with beef mince, not lamb mince, so really should be called ‘Cottage Pie’. Plus, I am too lazy to actually make it into pies, (you should ask my family about my picnics sometime – they epitomise my lazy cooking style). So, really, it will be heaps of mince on plates with heaps of mashed potato. But Shepherd’s Pie sounds better. I put the frozen veg into the freezer (keeping things simple, remember?) and made a start on the mince.

The mince recipe is modified from a Nigella Lawson recipe, because I like her food, even if I don’t manage the flirty eyes when I cook. It is a brilliant recipe as it involves putting lots of veg through a processor so it forms a mush, then adding it to mince. So children (and elderly members of lunch club) eat lots of tasty vegetables without realising it.

Due to a recent decrease in numbers (none for good reasons) I decided to cook for 35 people. I began to peel onions and mush them with bacon, and add them to the mince to fry. Onions for 35 people makes you cry. 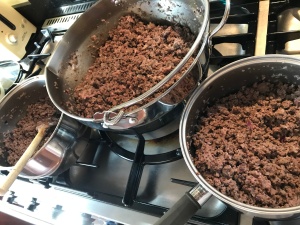 Then peeled carrots, feeling slightly guilty. Every week, we have a young woman who is autistic, who comes to help us prepare the veg and wash up. She always peels and chops the carrots. She works really hard, and never complains (except the week when my sister came to help, but that’s another story). However, she does not like things to change, and she always peels the carrots. But I needed to mush them and add them to the mince, so this week I did them. This might cause angst tomorrow. I will worry about it then.

Added whiskey, Worcestershire sauce, tomatoes, allspice, cloves, and other stuff. Left to simmer for about an hour while I washed up. When it was cooked, I transferred the mince to plastic containers. This is one of the difficult bits – when you are cooking for lots of people, you must ensure that everything is cooled down and refrigerated within two hours (otherwise it has to be thrown away, which is something of a waste). Cooling down heaps of mince is not as easy as it sounds. Finally was cool enough to go into fridge. 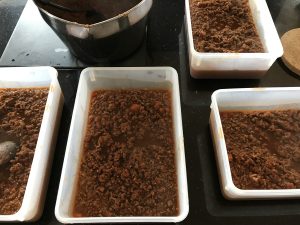 Washed up. Cooked ginger sponges (will reheat them tomorrow with custard for pudding). Washed up.

Packed car with rest of stuff, then allowed dog back into kitchen (she is banished when I cook, in case a stray hair floats upwards and contaminates the food).

Considered whether chest pains were better or worse. Have a slight nagging thought that heart problems begin with chest pains. But I feel I have already had a brain tumour (rare) and that to also have heart problems (also rare) is simply too unlikely. Decided chest pains are more likely due to lugging crates of water around for the ducks, and took an aspirin.

Rest of day spent walking dog, doing washing, clearing up cat sick (old decrepit cat who lives in the utility room) and reading. Got a dinner out of freezer for our own meal – after a day cooking mince, I cannot face making something else for us to eat.

Thank you for reading. By the way, have you read a copy of CLARA yet? It’s getting some good reviews already, which is very exciting. Take a look at the Amazon link, to see what other people are saying.

3 thoughts on “Diary of a Day”