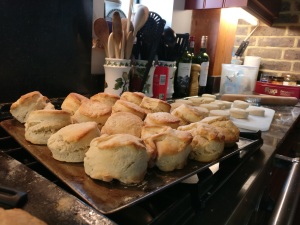 It was Grandpa’s 80th birthday, so we invited the family round for cakes and scones. Those of you who remember that I am meant to be reducing my cholesterol levels, might be wondering how cakes and scones fit with this. But my mother told me to never answer questions like that.

To be fair, I have tried to increase my exercise, and I have started to run. Opposite our house is a big field, about 125 miles in circumference, and when I walk the dog, I now jog for some of it. It’s nicely remote, so no one can see me, and I started to run just a few paces, then walk to recover, then run a little further. I can now jog around 3/4 of the field, which I think is pretty good going. I won’t be entering the marathon, as other people might measure distances differently.

As soon as I start to run, the dog picks up a stick, and then trots in front of me, tail up, head forward, as if showing me that she thinks my speed is pathetic. When Son 2 is with me, I have to tell him I am jogging, otherwise he might just think I am doing a funny walk. There is not much discernible difference in speed between my walk and my run. In fact, the only real difference is my face goes very red, and stays that way for about 3 hours afterwards. I have no idea whether it’s making any difference to cholesterol levels. 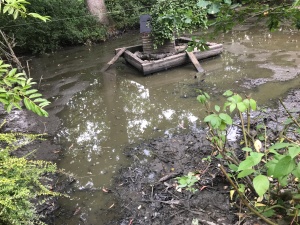 My other news is that we have started work on the pond. It’s quite a large pond, and it’s under some large oak trees. The trees drop all their leaves into the pond, so the bottom was filling with silt, and the water was becoming ever more shallow. It was also eroding the edge, so was in danger of undermining the roots of the trees. We therefore decided to hire someone to move it. Which has turned out to be fairly major work.

Firstly, I had to catch all the ducks. This worked well with my aim to teach the duckling who was hatched by the chicken, that s/he’s a duck, and over the course of a week, I managed to catch all the ducks on the pond. They’re now in a cage, very unhappy but safe, and I spend lots of time cleaning them out and refilling water pots. 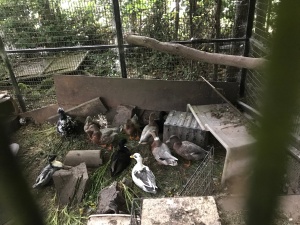 Yesterday the workmen arrived. They first had to dredge the pond, so removed the fence to make an easy access point, and began to pump out the water. They also had to move some plants that we hope to keep. A delivery of sleepers arrived, and these will make a wall on the side where the trees are, so it doesn’t erode in the future. The other edge will be natural, so it will be easy for the ducks to get in and out. They painted the grass to show where they plan to dig. The island had to be far enough from the edge to be safe from foxes, so they asked how far a fox can jump. They can, according to Google, jump 2m, so I’m hoping that’s an exaggeration or requires a run-up. I’m not sure how athletic the foxes around here are – more athletic than me, that’s for sure.

Today, a digger arrived, to dig out the rest of the pond. I had to shut the ‘outside cats’ in the workshop, as they won’t necessarily be helpful. The remaining chicken and cockerel are also still in a cage, so the fox can’t get them. Which means all my animals are caged, and I do not like animals in cages. I will let the hen go broody, so she has something to do, and then I will allow them out again in September, when any chicks she hatches will be big enough to be left. The ducks will be free in a couple of weeks I hope.

Hoping you have a healthy week.
Love,
Anne x

Anne E. Thompson is an author of several novels and one non-fiction book. You can find her work in bookshops and on Amazon.
Thank you for reading.
anneethompson.com