Hi, how’re you? Yesterday I had a grotty night, and woke up feeling snotty. I hate colds, don’t you? I know in terms of illnesses, they are very minor, but they don’t feel minor, they feel rotten. I gave myself an easy day.

On Friday (before I was ill) it was my turn to cook. Several of the staff were away, and a few have retired, so I had to be very well-prepared, and it was all quite hard work. While I was peeling potatoes, one of the team members came to chat to me. Most of the team are older than me, so I love hearing their stories. He was talking about the war, and he said that one of his friends was in the marines and belonged to the ‘special forces’ (whatever that might mean). Apparently, before they went on a mission, they were given drugs, so they could stay awake for ages, and wouldn’t feel frightened, even though they were going into extremely dangerous situations. He thought they were given heroin, but when I told my son, later, he said it was probably cocaine. I have no idea myself—I didn’t know such things happened in real life. When the marines returned, they went straight into hospital, where they had to stay for the week, until the drugs were out of their system.

I don’t know if this is true, or exaggerated. But it’s kind of interesting, don’t you think? I wonder if things like that happen today. War is always terrible; the rules change.

Anyway, I survived the cooking (without the need of narcotics) and the seniors survived eating it. They also survived the ‘keep-fit’ session we have introduced at the beginning. An ex-PE teacher came, and showed them some exercises they could do. Apparently, if you have arthritis, it’s very important to use your joints, otherwise they seize up.

My other news in brief: The chicks are growing fast. Each day I look, and try to guess whether they’ll be cockerels or hens. Cockerels have a very red crown, and thicker legs, and even at this age they tend to be very dominant. I think 4 of the 6 chicks are cockerels, which is very bad. Last time, only 2 of the 6 were, and they lived peacefully together for ages (until the fox got one). I’m not sure how four will fare, plus their dad. I may have to separate them, which will be a right pain. Do you know anyone who would like a very noisy pet? 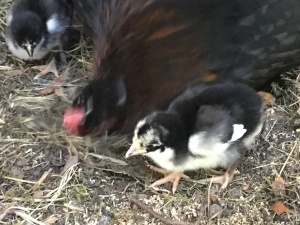 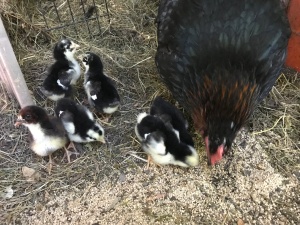 I have also nearly finished the first draft of my new book (due to be published in June 2019, because the next part takes ages!) This book has been fun to write, as it’s a lighter read than my last two, and has some funny parts. As it’s set on a farm, I thought I would take some photos of the cows in the field next to the house. They are young steers (boys) and when I arrived they were all lying under a tree, which was no good for a photo. I climbed over the stile, and called to them, but they ignored me. So very gradually, keeping an eye on how far I was from the gate, I walked towards them, my camera poised. One stood up, but they didn’t come any closer. I was talking to them, trying to look as if I might have food, making general cow-like noises. Eventually they all began to stand, and then, as a single mass, they lumbered towards me, their great fat sides swaying from side to side. I didn’t want to be pushed over, so I retreated to the stile, and stood on it. They came right up to me, the flies buzzing round their eyes, their wet noses dripping, their tongues reaching out to touch me.

I took several photos, while they took it in turns to lick me, and press their noses against my jeans. I returned home very soggy, and smelling of cows. I like cows though, there is something uncomplicated about them. Don’t you think so? 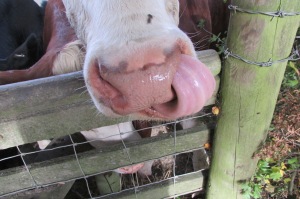 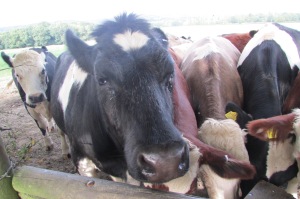 Hope you have a good week, and don’t feel the need to be drugged (and also hope you manage to avoid having a runny nose—there are a lot about!)

One thought on “Just Life”