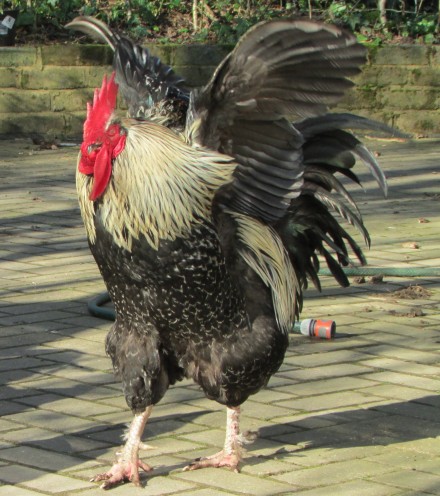 I thought I would give you a quick update on my news. First, the family of cockerels. As you may remember, I was fortunate (!) enough for five of the six hatchlings to be male. Now, contrary to popular belief, it IS possible to have a flock with more than one cockerel and not have open warfare. I know this because I had two cockerels who lived very peacefully alongside each other for a couple of years (until a fox ate them). However, five young cockerels, plus their father, seems like a lot.

As the hatchlings grew, and were allowed to roam freely around the garden, the flock separated. The parents and the female wander around the garden together, and the young cockerels form a separate flock. A few weeks ago, they started ‘facing off’ to each other. None of them has spurs yet (the deadly sharp talons on the back of their legs) so I figured they were unlikely to kill each other, and were probably simply sorting out the pecking order. I left them to it. The dog takes a keen interest in this, and has taken upon herself the role of peace-keeper. If they start to fight, she stamps on them – which is remarkably effective.

When we went to Devon for a week, I was worried about leaving them all in the same cage, so I split them up. I waited until evening, when they were all roosting on the perch, and then went to move the young cocks into a separate cage. I have to say, it takes an amount of courage to approach a cockerel, which is staring you in the eye, at head-height, with an elongated neck and fluffed up feathers. But I managed to pick them all up, ignored all the squawking, and carried them, one by one, to a new cage; and I survived without getting my eyes pecked out (which would have made Husband cross).

When I returned home after Devon, I opened both cages, to see what would happen. For a couple of days, the father and both hens roosted in one cage, the five young cockerels in the other. Gradually, as they have established a pecking order, two of the weaker cockerels have started to join the parents. I now have ‘the elite team’ of cockerels in one cage, and the rest in the other. For now, we are at an uneasy truce. If any of them become very aggressive, they will have to go (don’t ask me how – but I am not vegetarian, and neither is the local fox, so I figure I have a couple of options…unless you would like a pet cockerel? Do let me know.)

My other news, which is sort of vaguely related, is my new book, which is set on a farm. The first draft is finished, and I began to send it out to publishers. One publisher sent back a detailed editorial report, saying they didn’t want to publish it as it was, but would reconsider if I rewrote it. I am therefore in the process of rewriting it. This is taking much longer than I expected – longer in fact than writing the first draft, because as I change things, I lose the rhythm of the story, so have to rewrite increasingly large sections. It feels like work, and is not much fun. But I do feel the book is improving, so it’s worth the effort. When finished, I will resubmit to the publisher, and see what happens. I would like it to be released in the summer, but it may take longer than that. I will let you know.

A late Christmas gift was a trip to the British Museum and having a tour of the artefacts that relate to various stories in the Bible. Do you know why it was historically appropriate for Daniel to be put in a lions den? Or the name of the Pharaoh who put Joseph (of the coloured coat) in charge of all the agriculture? Or the Pharaoh who suffered the plagues at the time of the Exodus (because it probably wasn’t Ramesses!) I’ll tell you all about it in next week’s blog.

That’s all for now. I hope you have a good week.

One thought on “All Quiet On The Chicken Front…”