I had another rather nice treat (another of my: “you’re too difficult to buy for so we’re giving you vouchers for Christmas”).
I had a voucher for ‘Lunch in a Spoons followed by a trip to a gallery’, a gift from one of my sons.

Off we set. The travel was somewhat more exciting than anticipated, as neither myself nor the son who gave me the voucher are great at time-keeping, so catching the train involved a rather panicked abandoning of the house, a fast drive to the station, and a run onto the platform. But we made it. I then sat on the train worrying whether I’d remembered to get the dog in from the garden, and son checked his phone for directions to the gallery.

We arrived at Victoria, and walked to the pub for lunch. I was expecting the pub to be called ‘Spoons’ because that is what my son talks about (rather more often than you might expect) but it’s actually called ‘Wetherspoons’ – which I suspect you and the rest of the world, already knew. I was also expecting a rather greasy, uncomfortable lunch, but the pub was not dissimilar to a Beefeater, and the lunch was very nice. (Of course, I am a mother, so the nicest part was simply that I was having lunch with one of my children!)

The Tate Britain – complete with giant slugs outside!

We then walked down to the river, and along to the Tate Britain. I’ve never been before, and wasn’t sure what to expect. As we approached, and I saw giant slugs outside, with slime-trails of fairy lights, I knew I was going to like it.

We wandered round for a couple of hours, and still didn’t see everything. I’m not keen on some modern art (I like things that are better than something I could produce) so any halls that at a glance could have been either building works or art installations, we avoided.

The Shipwreck
By Joseph Turner
(One of my favourite paintings.)

There was an excellent exhibition of Turner’s work, and a Lowry (who I am rather fond of due to the song that was popular in the 70’s about ‘matchstick men and matchstick cats and dogs’).

We briefly popped into a room displaying work by William Blake – who I thought was the chap who did flower etchings that are often used for wallpaper – but I was wrong! He did etchings, but of characters from Chaucer and things that don’t much appeal to me.

There was a rather spooky painting of a girl, whose eyes followed us round the hall, and an excellent painting of a boat in a storm.

I found it was better to enjoy the paintings without reading the explanations: there was one of a graveyard, and people climbing out of the graves. There was a man, trying to push his wife back, and a family of children all struggling to get out first, and an unmarked grave with lots of black people (who I guessed were slaves). But when we read the card next to it, the painting was meant to be symbolic, and all about the resurrection when Jesus returns – which was much less fun!

After a couple of hours, we’d both seen enough art. We walked out, past the Star Wars sculpture, and back into the wintery sunshine. It was a lovely treat, and we got home tired and happy – and yes, the dog was safely in the kitchen. 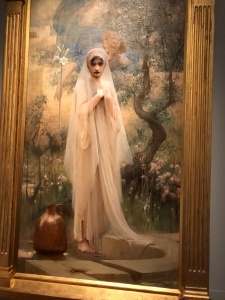 A spooky girl – her eyes follow you when you move…

The paperback version is currently available for £9.99, but as I will need to buy copies for book fairs, I will need to cover my postage costs, so this price is for a very limited time (I think it will be around £12 in the future, but I wanted to let you, my blog readers, know that they can buy it for the cheaper price, until March). It is also available as a Kindle book.

One thought on “Spoons and Art”