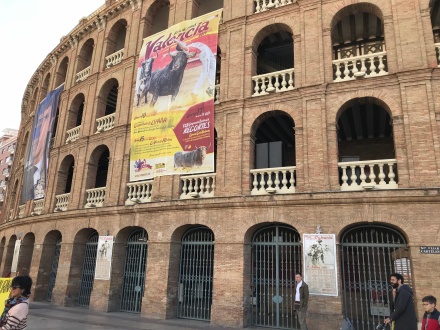 Showered in excellent shower in cupboard-sized bathroom. Bruised elbows trying to get dry in there, so gave up and dried on mezzanine. Bathroom has another large, exposed window, (so am hoping no one was looking).

Walked through Valencia, which is very pretty, and very Spanish, with orange trees and fountains and apartments with balconies. We saw the outside of the bullring, and went into the pretty art deco railway station, which reminded me of the one in Portugal with its patterned tiles and beautiful ceilings.

We sat outside and had churros and hot chocolates. I was hoping to find an old Spanish man, smoking a cigar and drinking coffee (because this is what all Spanish men are like) but they were all hiding.

We walked passed the cathedral, and the old city gate, then walked along a dry river bed which is now Turia park.

Visited a lovely park next to the Fine Art Gallery, and enjoyed the sunshine (some of us enjoyed it more than others).

There were lots of unusual trees in the park. We saw some Moreton Bay fig trees – ‘Ficus macrophylla’ – which have arial roots that grow down from the branches, so they look like a tree from a magical land; and some trees with swollen trunks covered in fat spikes (ceiba speciosa).

But my personal favourites are still the orange trees.

Valencia, in March, is noisy. Don’t come if you have a headache. This is due to Las Fallas…Let me tell you about Las Fallas: This began, in the Middle Ages with San José, (Saint Joseph) who is the patron saint of carpenters.

The carpenters used to hang up planks of wood to support their candles when working through the dark winter months. When spring arrived, they would burn these planks, to celebrate the longer days and sunny weather. Over time, they started to put clothing on the planks of wood (not sure who thought that was good idea) and then they began to make them into effigies of well-known characters. These later became ‘ninots’, which are enormous figures that are made today, and paraded around the streets. As the burning of these elaborate ninots began to get out of control, the authorities decided to link it to St Joseph’s Day.

We didn’t see these (we weren’t there for that day) but we did see people in costume, and we heard lots of fireworks. Really, lots and lots of fireworks. Not the pretty ones that make you say “Aaah”. They just went bang. Sometimes very big bangs, which gave you a heart attack (or worse). It seems that every male (not just males, but mostly males) from the age of about 2 years upwards, buys fireworks to throw around. There are whole shops, whole catalogues, dedicated to the sale of fireworks that go bang. It was like living in a war zone (I imagine).

We stopped for ice-creams. I managed to order mine in Spanish (with a few prompts from Cousin N’s husband) but then, just as I was feeling very pleased with myself, the shop assistant went off-script, and started to say unexpected Spanish words. It was the most delicious ice-cream though (dolce de leche flavour).

We then drove to the beach. The beach was very cold. One of us decided to swim. I wasn’t tempted to join her, though the water was very blue. An unsuspecting passerby almost got a shock, and I was worried she might drown as our only strong swimmer wandered off with his dad, but all was fine, if damp. We stood on the beach, shivering, laughing and eating cheese and pimento sandwiches (which were delicious).

If you enjoyed this, why not read my travel book? You can read it for free if you have a Kindle.