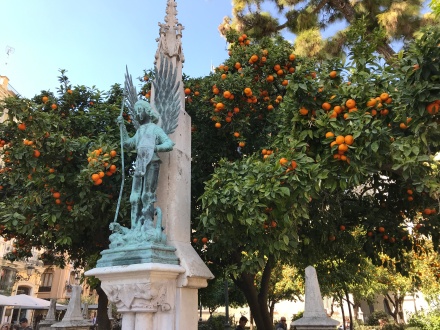 Caught the early morning flight to Valencia (very early). I only had a hand-luggage allowance, so was worried I would have to wear several layers and arrive looking like The Michelin Man, but everything fitted in my pull-along.

Met Cousins at Valencia airport. We were meeting to celebrate Cousin C’s big birthday, and were visiting Cousin N and family, who have moved to Valencia. Drove to their apartment in the city, and met their extremely cute labrador puppy. (Their children are also very cute, but I rather fell in love with the puppy.)

I was staying in an airbnb with Cousins C and L. New experience for me, so wasn’t quite sure what to expect (my sons stay in air bnb, so I wasn’t expecting ‘posh’).

We dumped our bags, and had a late lunch in Bar Pascualin. All lunches in Spain are late. Walked to Dolche de Leche cake shop, and spent several hours trying to decide which cake to buy. (Mouth is watering as I write this.) Chose a lemon meringue pie. It didn’t disappoint.

Drove to Lake Albufera and went on a boat. The sun was setting behind the mountains, the birds were wading amongst the reeds, and it was pretty perfect. There was some discussion about the origins of the lake – I think it’s a natural sea-water lake, which the Moors desalinated, so now it’s the largest fresh water lake in Spain…possibly in Europe…or even in the whole world…anyway, it’s big.

After tea, we went to our air bnb. Arrived at a large metal gate (very Spanish), and used our key to enter the lobby.

In the lobby was a lift, which closely resembled an upturned coffin (was certainly no bigger). We squashed inside, and Cousin C extracted her arm from rather aggressive sliding door which shut automatically, and we began to ascend. I hoped the coffin analogy wouldn’t be accurate – I certainly didn’t trust that the ‘emergency telephone’ would work if we got stuck. Arrived at the top floor, but still needed to go up a further flight of stairs. The stairwell was very dark, so Cousin C (the practical one amongst us) helpfully pressed the light switch. It didn’t seem to work, so she pressed it several more times. We then realised that actually, it wasn’t a light switch – it was a doorbell. (Spanish people disguise doorbells as light switches, I’m not sure why.) Being mature women, as soon as we realised we ran giggling up the stairs and locked ourselves into our apartment. Am hoping no one heard.

The apartment is small, but has everything we need (except for curtains and blinds – I am rather partial to curtains and blinds). There was a blind over the door to the balcony, which took us longer than you might think to work out (practial Cousin C sussed it for us). The balcony is wonderful, and overlooks the whole of Valencia (well, a bit of it). I slept on the mezzanine with Cousin L. It was cosy, and rather lacking in a curtain/blind, so we woke when the sun rose.

I will continue this tomorrow, because I want to tell you about Fallas.
Thank you for reading.

A laugh-out-loud book about travelling the world with a family. Taken from diaries written at the time, this book has been described as “The Durrells meet Bill Bryson”!

If you enjoyed this, why not read The Sarcastic Mother’s Travel Diary? It will make you laugh, and you can read it for free if you have a Kindle…available from an Amazon near you.