I was reading Matthew 22 today, and there is a parable in the first 14 verses which seemed a bit odd. Jesus is talking to the leaders of the day, the Pharisees, and he tells them a story about a king throwing a party, and all the invited guests refusing to come. I understood that analogy – the invited guests were the Jews, and many of them were messing up their gift of a relationship with God.

So, in the story, the king sends his servants out into the streets, and they invite everyone who they meet to come to the party. I understand that bit too – after the Jews (well, some of them) messed up the whole ‘people having a relationship with God’ gift, Jesus made the gift available to other people (the ‘dirty gentiles’ – that’s most of us!)

But then there’s something which seemed very odd. In the story, the king arrives at the banquet, where all those people who have accepted the invitation are sitting, enjoying the party, and he sees someone who is inappropriately dressed. The king is so angry, he throws out (in effect, banishes him to hell). Now, what does that mean? Surely, if you invite people who live on the streets to a party, you have to expect them to be inappropriately dressed? This seems a little unfair.

I did some research, and this is what I think it means: God invites everyone to come to him. Like in the parable of the prodigal son, he is a loving father, he will do everything possible to meet us where we are, he wants to save us. (Remember, in an earlier blog, I explained how when the son says: “I have sinned before man and before God,” he is actually quoting what Pharaoh said when he wanted the plagues to stop – he wasn’t sorry, he just wanted things to get better. But the father met him anyway, and that love, that willingness of the father to save the son even when he was continuing to behave badly, was enough for the son to realise that he couldn’t earn his way back, he simply had to accept what the father/God was offering.) So what does the bit about the clothes mean?

Well, I think, that yes, God wants everyone to come to him, and he has done everything necessary for us to know him. However, we also have to accept that. Now, apparently, in the days of Jesus, a king would have provided appropriate clothing for a guest (a bit like when you turn up at a posh restaurant, and they have ties for you to borrow because you didn’t realise there was a dress-code). I guess the clothes would signify the willingness to change, to become what God wants us to be, to let him alter us. Therefore, although we can all come, unless we let God change us through his love, then that is not enough. If we truly are responding to God’s love, rather than using it as a sort of ‘get out of jail free’ card, then we will let that love change us. We will be pleased to wear the garments appropriate for a party. If we don’t, we have missed the point. Which would be worse than never acknowledging that great love in the first place.

I think that’s what it means anyway. Makes you think, doesn’t it?
Thank you for reading.
Take care this week. 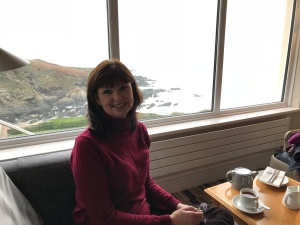 Anne E. Thompson has written several novels, which are available in bookshops and Amazon.
Anne writes a weekly blog – why not sign up to follow?
anneethompson.com

One thought on “Being Loved”