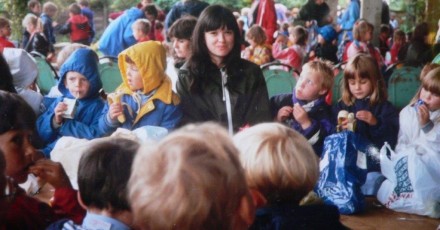 When I was teaching at Limpsfield Infant School, I would very often look up from taking the morning register, to find a child standing next to me. “What’s the matter Tommy?” I would ask (though it might be Jane or Christopher or Matthew). “I’ve got a tummy ache,” they would reply. And I would guess that whatever the first subject of the day was, they found it difficult. Usually I would assure them that maths gave me a tummy ache too, and we would sit down together and try to sort it out.

(Of course, sometimes they really did have a tummy ache, and I will never forget the day that a girl – whose name I remember clearly – vomited all over me. This was not helped when her mother – who I also remember – came to collect her and seemed to find it terribly funny, even though the child was ill because she’d just been taken to have vaccinations for a holiday. There is so much I could say here, but hey, I’m over it. Sort of.)

Anyway, my point is, children don’t always say what they mean, and part of being a good teacher is hearing what they’re trying to say. Grown-ups also don’t always say what they mean, and sometimes this is good. So when, driving home after an event, my husband turns to me and says, “You were the prettiest one there,” I am pleased. Even though I know that it’s not true. But he’s telling me that in his eyes, I am still pretty, and he’s glad I was there. It made me smile recently, to watch a film on Netflix, when all the wives were told by their husbands that they were ‘the prettiest one there’, because I had thought it was only my husband who said that!

However, sometimes people don’t say nice things, they say horrid things, and part of being an adult—I think—is trying to hear what they’re really saying.

I find it much easier with children, perhaps because I want to give them the benefit of the doubt. Or perhaps because they’re not so good at pretending, so it’s easier to see what they’re really saying. My mother always says she likes teenagers, because “they are completely selfish, and they don’t pretend not to be.” Adults are harder, because generally we are also completely selfish, but we try to hide it.

I hope you agree that sometimes, what people say, is not completely what they want you to hear. And usually, they simply need some reassurance, to know that no one else is perfect either, and that’s okay. Sometimes we need other people to hear that we’re vulnerable, and we’re not quite managing to keep up. Because all of us are falling behind with something. And sometimes, we all need someone to say to us: “You were the prettiest one there.”

Which book would you like to read next? Available from bookshops and Amazon.

Now is an excellent time to read my travel book. Happy adventures from around the world. Available from Amazon.

This is the story I always promised myself I would write ‘one day’ while I was teaching in an infant school. A light-hearted novel about 3 teachers.

What if…a psychopath managed to do something good. Can psychopathy ever be a strength?

She doesn’t look, think, or fight like James Bond, but sometimes a mother simply has to do whatever it takes. . .

What if…a happily married woman falls in love with someone else?

What if…you were the mother of a psychopath? The story of Joanna and her family – an exciting novel.

2 thoughts on “Hearing What Is Meant”