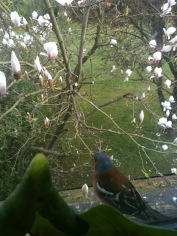 I thought I’d give you a quick animal update (because the rest of my life is pretty boring at the moment — I’m doing lots of writing, and not much else, which doesn’t make for a great blog post!) However, while I am writing, I am frequently disturbed by a tapping on my window. We have some chaffinches who must be nesting nearby, and they spend a lot of time on my window sills, tapping on the window. I’m not sure why –whether they can see their reflection and want to say hello, or whether they are keen to get inside, I don’t know. They’re very pretty though…and absolutely determined to not be photographed. I have many photos of my empty window.

At first, I thought I had siskins, as I had only seen the females, and they’re a greenish yellow colour. When you see a blur of colour disappearing from the bathroom window, it’s hard to identify. The males are bolder though (so much I could say) and I’m sure now that they’re chaffinches. I have managed one photo. Just one. So enjoy…

My rather bigger birds are the chickens. They caught a mouse the other day, and I spotted them running round the garden, trying to snatch it from each other. Not sure which one eventually won. Also not sure if the eggs will taste different if they start eating mice — not something I want to think about really. We’ve had another raid by the fox. I did have two quite stable flocks: the father cockerel with two hens, and three of the surviving five cockerels that hatched, who live in a different cage at night and wander round the garden during the day in a sort of uneasy truce, not quite daring to approach father cockerel, but also not wanting to be too far away. But then the fox came, and ate the father cockerel, which was a great shame as I’d had him ages and he was a lovely temperament.

As soon as the father was gone, the three young cockerels tried to move in on the females. They’re mother and sister, so I wasn’t keen for them to breed, and if the fox is around, I’d like to have a few more chickens (because I don’t like animals in cages, and yet if they’re loose, I’m sure to lose some). So, I’ve shut the females into the aviary. At the moment, I’m removing their eggs (because they’ll still be fertile). After a few days, I’ll let them go broody. Then I’ll buy some unrelated eggs from Ebay, and replace the ones they’re sitting on, so they will hatch and care for the new eggs. In the meantime, the cockerels can take their chances in the garden…and hopefully help the cats to keep the mouse population down. 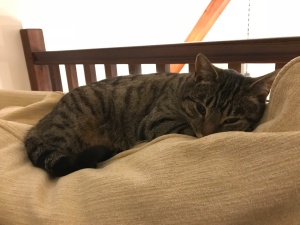 Non-bird news is that Milly has decided she no longer wants to live outside, and has pretty much moved into the kitchen. She’s very snuggly (but only when she feels like it –there’s still a lot of wild cat in her.)

We also have lambs in the field next to the house. They are always so pretty. I smile everytime I see them scampering around. Hoping the fox doesn’t venture over the fence. Life is precarious…but maybe that makes it more precious.

One thought on “Birds”