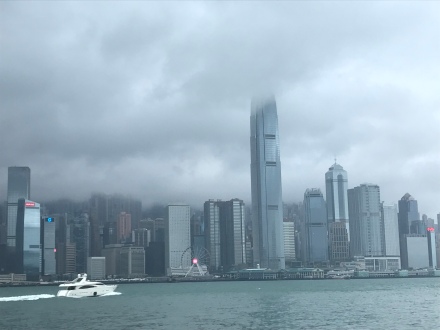 Last Friday was a busy day. I had to sort the poultry (new eggs safely in incubator with instructions left for family to top-up the water regularly) then I took Mum to Lunch Club. It wasn’t my turn to cook, and plenty of people had turned up to help, so I left the termly letter and came home – because I needed to pack. I was also feeling quite tired, because since I decided to join Husband on his business trip to Hong Kong, I had been adjusting my clock.

Hong Kong is 7 hours ahead of UK, and our trip was for a few days. That’s not very long to adjust to a big time difference, and my body is fairly rubbish at adjusting to anything these days. Gone are the days when I would arrive in a country, set my watch to the correct time zone, and after one day of feeling wonky, I would be fine. Now I find my body is exhausted at all the wrong times, and simply refuses to go to sleep when it’s put to bed – which often results in a 3-day migraine. Bit of a waste of a trip abroad. So, I decided, in my wisdom, that I would adjust gradually, an hour a day, until I was 4 hours ahead of UK time. Then I would stop, because being 3 hours behind Hong Kong time wouldn’t matter, I wasn’t planning on meeting anyone, I could just get up late.

It all started rather well. The dog wasn’t too impressed when I appeared in the kitchen at 3am, but other than that it was fine. I rather liked being awake before the rest of the world, having a couple of hours to myself before the family got up and set off for work, going for walks in the clear morning air. No one was at home during the day, so I kept my meals on ‘Anne-Time’: lunch at 10:30, dinner at 3pm (the rest of the family had to reheat theirs when they got home) bed at 7pm. Actually, the going to bed bit was quite difficult, as I think I possibly have the noisiest family in the world.

Anyway, I thought it was all going well, until the day we travelled. We had 21:50 flights – that was the middle of the night Anne-Time. I took ear-plugs and eye-mask, and tried to nap in the lounge after we’d gone through security (we were travelling posh-class as Husband was working and I was on airmiles). But it was way too noisy and bright. Honestly, airports could save a lot of money on their electricity bill if they cut out the awful music (Wham! They were playing Wham for goodness sake) and dimmed the lights a bit.

I made it onto the plane (picture ‘walking dead’) and as soon as they allowed us to remove seat belts, I settled down for the night. I did sleep for a few hours, which is unusual for me, and then woke at 7am Hong Kong time. The rest of the plane was asleep – I don’t know why more people don’t change time zones before they travel. Odd that.

Hong Kong airport seemed nice. It was well-organised, and immigration was efficient and quick. The washrooms were clean and everything was automated. The taxi rank was easy to find, and we were told to get a red taxi (not a green one) as we were going to Kowloon. A man was translating, so we only needed the English address (in China, you need to have the address in Mandarin if you take a taxi). 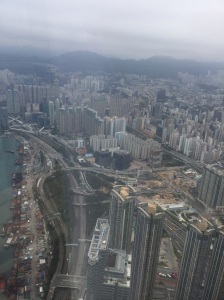 The ride from the airport took about half an hour. I’ve visited Hong Kong a few times, but not for a few years. The first impression as you leave the airport is of towers of apartments, there are loads of them. There are posh towers, and new ones, and towers that look as if they’re waiting to be demolished. And trees – there are a lot of trees, growing up the mountainsides, giving everything a green border. But there are no parks, no fields, no gardens – in fact, no flat spaces at all. (There are parks, but you don’t see them from the taxi.) All you see is apartment blocks and office towers and trees, perched on the sides of the hills – which are very accurately called ‘peaks’. They are not the Sound-of-Music gentle slopes, they are great rocks, lumps of granite, jutting up towards the sky, with water lapping to the edges.

Once you arrive on Kowloon, there is more flat land. That’s because the land has been reclaimed. We arrived at our hotel, The Ritz Carlton. All very posh.

I waited on a sofa while Husband checked in, and a man (tall, good-looking, European – in case you were wondering) came and offered me some green tea. It was cold. I then worried whether beautifully presented cup of green tea would make me ill, and interrogated man about whether the water was boiled, and whether ice had been added. Decided to risk it. It didn’t taste like green-tea, it tasted like lemon tea. Perhaps it’s the American equivalent. I didn’t like it much.

We went to the room and unpacked a bit (only a bit, because there are hardly any drawers in the room). We let the family know we had arrived safely, then set off in search of dinner.

All the restaurants in the hotel are hideously expensive – the cheapest meal being a burger for £40. Not really our style. Beneath the hotel is a shopping mall, called Elements, and there were places to eat there. The prices of the restaurants were comparable to English prices, which is probably loads more than a traditional restaurant in Hong Kong, but I prefer to eat in ‘safe’ familiar places – always hard to juggle ‘experience’ with dodgy health. 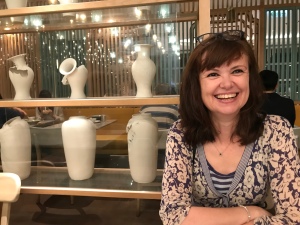 We ate at a restaurant called The Night Market which is a Taiwanese restaurant. We had dumplings and soup and noodles. The dumplings were wonderful. It was all very clean, and they brought water with the menus, but we didn’t drink it as it was probably tap water, and we had tall glasses of local beer (much nicer).

We walked around a little, but it’s the beginning of the rainy season, and we were tired, so we went back to the room fairly soon.

I will tell you more another time. Thank you for reading.

If you enjoyed this, why not read my latest book: The Sarcastic Mother’s Holiday Diary?

I have sold lots already – if you have read a copy please could you be very kind and put a review on Amazon? If you haven’t read it yet, the UK link is below.

One thought on “To Hong Kong”