Husband has finished work, so he joined me on Anne Time and reset his watch for 3 hours behind HK time. The weather forecast was dry, which makes a huge difference to what you feel like doing, so we left our raincoats in the hotel which was very brave (I smuggled my umbrella into my bag—too many days of rain so far).

We walked to the Hong Kong Museum of History. I’m not keen on museums, and at first, this museum reminded me why—too much information on tiny cards and displays of geological features in glass cases. It was also basically dark, with ferocious spot-lighting and lots of very loud recordings—don’t visit with a headache. However, then we went upstairs. Upstairs was so much better; some parts were hardly like a museum at all.

The museum explained how Hong Kong had been an area of boat people. They lived their whole lives on the boats, fishing and trading. Gradually, the population moved to simple huts on the islands of Hong Kong.

The dragon dance originated with the boat people. When a couple got married, the bride would be carried in a dragon boat (a 10-person rowing boat) to the groom’s boat. When the people moved to the land, they adapted this tradition into a dance, with a symbolic dragon, and the other dancers imitating the rowing action. According to tradition, the bride must neither see nor step on the ground when she is going to meet her husband, and she was carried, piggy-back style into a sedan chair, and then taken to her husband. She wore red. (Brides today in China usually wear red, though they also buy a white dress, for photographs beforehand—we have seen a few brides being photographed in various scenic places.) 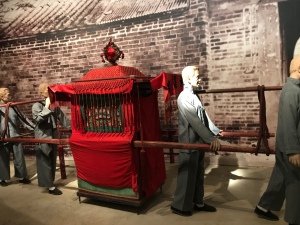 The museum has a model, which shows the fort which was in Kowloon. This later developed into a walled city, and when the British took over, it was outside of their jurisdiction, but also beyond the control of the Chinese, so it became a completely lawless place. When I was young, I read Chasing the Dragon which tells the story of the people inside the walled city—it’s a good book if you’re looking for something to read. Eventually, the British and the Chinese agreed to demolish the city, and today it’s a park (which I’m hoping we can visit).

Another display explained how rice is produced. It looks a lot like wheat, and the rice grains are the seed head (I didn’t know that).

There was a display that explained the Opium Wars. In brief: China was a closed country, and did not want to trade with the rest of the world, but the rest of the world was jealous of China’s resources. European countries decided to attack the coastline, so sent boats to attack. China relented, and allowed some trade. The British were very keen to buy tea and silk, but they had nothing to trade in return, so the market was very much in favour of the Chinese. At the time, Britain occupied India, where opium was grown. So, the British imported opium to China, to rebalance the market. The British sent so much opium, that at one point there were over 10 million Chinese addicts, which had huge repercussions on the Chinese economy and health. (Writing this does not make me proud to be British—we did some terrible things in the past.) China tried to stop the opium being imported, and there were wars. In the end, an agreement was reached, and Britain stopped importing opium, and in return, China gave us Hong Kong. However, we still smuggled opium into China, via Hong Kong.

Under British rule, Hong Kong became a major trading port. The museum has recreated an old-fashioned Hong Kong street, which you can walk along, looking at shops from years gone by.

There is then a section devoted to the Japanese occupation. There is a photograph of Nathan Road (which we have walked along several times) showing the response of the locals when the Japanese left.

Many of the museum’s displays explained the various religious festivals in China—like the Bun Festival. One island has huge structures, covered in buns—which look like a massive tribute to McDonalds. The festival takes place in May, so we might go to see it.

After a couple of hours, I had no more brain capacity for further discoveries, and so reluctantly we left. There were still displays we hadn’t seen—this is a museum where you could spend an entire day. I hate museums, but I really enjoyed this one. The displays were like storybooks, you felt as if you were stepping back in time and experiencing what it was like to live in ancient Hong Kong. If you ever visit Hong Kong, make time to come here.

I hope you have an interesting day too.
Take care,
Love, Anne x

One thought on “Hong Kong History”