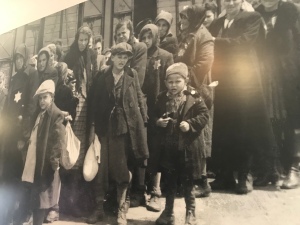 The second Auschwitz camp was built in 1941, using prisoners from Auschwitz 1 as labourers. The focus had shifted, the prison was no longer viewed as a work camp for people who opposed the regime, it was primarily a death camp. Although there were still other prisoners, mainly gays, gypsies and Soviet prisoners of war, the vast majority were Jews.

We drove to Auschwitz II, and parked outside the main gate. This is the image so often seen in films, of the cattle trucks on the railway, driving into the camp, and stopping inside where the prisoners are unloaded. In reality, the railway lines finished at the gateway, and were only extended inside the camp in 1944 (or so I understand from what I have read) because the Nazis were losing the war and were keen to exterminate as many Hungarian Jews as quickly as possible.

The thing that struck me first was the size of the camp. After Auschwitz 1, this was a whole village in size, it was death on an industrial scale.

The trains would draw into the camp, the people (who had travelled in awful conditions for several days) would be unloaded, then made into lines of men and women. A doctor would then look at everyone, deciding who was fit for work, and who was not. Those deemed able to work would leave their belongings on the platform, strip, be shaved, showered in disinfectant, and given a uniform and tattooed with a number.

Those deemed incapable of work—the old, the ill, the very young—would be sent to the ‘bathhouse’. These were the crematoriums at the end of the camp, next to the forest. They consisted of an undressing room, a gas chamber, and a crematorium. We went to have a look, though the buildings have now been demolished.

Now, I have read several books about the holocaust. As a teenager, I read all the books by Corrie Ten Boom, and Sophie’s Choice, and more recently I read Schindler’s Ark, The Tattooist of Auschwitz and The Boy in the Striped Pyjamas. I therefore knew a lot of facts, but what I was not expecting, was how weirdly civilised the killing seemed. The photographs show people discussing things with the Nazis, everything appears calm, organised. There is no panic—until later, when they were actually inside the gas chambers, when it would be too late. Right until the end, people thought they were simply being processed, and they were not being forced along at gunpoint.

I was shocked by how almost peaceful, some scenes were. For example, the cremating part of the process took hours, so the Nazis did not have the capacity to murder the thousands of arriving Jews immediately. There are photographs of families waiting their turn. There they are, sitting under the trees, grandparents and children, clearly exhausted from their journey, waiting. There seemed to be no resistance, no screaming; people were waiting calmly, looking serene, wondering how long they would have to wait for. The area was surrounded by tall hedges (to hide what was happening from the neighbours) and is bordered by forest—there would I assume have been birds in the trees, in the summer there was grass to sit on; such things seem incompatible with the horrors of what was happening, and that is my point. Auschwitz was not set on the moon, it existed in the midst of life and nature, which somehow makes it worse.

Whereas Auschwitz 1 was very informative, with information and displays, Auschwitz II gave you more idea about how the place would have felt. We saw the brick buildings, which are now beginning to need structural support, crammed with bunks. There were wooden huts—made elsewhere for easy assembly, and designed originally as horse shelters (we saw the rings in the walls for tethering horses). They were designed to shelter 52 horses, they housed 400 people. Many of the huts have disintegrated over time, and all that is left is fields of chimneys, all that remains from their heating system. 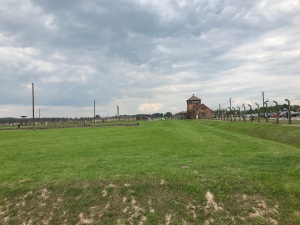 We saw the toilets (2 visits per day allowed) and the brick-floored washing area. The hut has since been rebuilt, and today it smells of fresh wood and creosote.

This was a vast camp, with thousands of people crammed together, in terrible conditions. Many people starved to death, or died when working or due to cold. I knew all this before I visited, but to stand next to the electric fence, and stare at row after row of huts, to imagine those people running between them was something no book could explain. Auschwitz today is a quiet place, where larks sing overhead, and people come to remember. I do not know how we make sense of what happened there, when I stare at the photographs of the guards I do not see evil people but I cannot fathom how they could have been part of such horrific actions. Perhaps the problem starts when we begin to see ourselves and those like us, as better than others. If we begin to think some groups of people are less good than us, do they become slightly less human in our eyes? If we think our race, our religion, our career, somehow makes us better than others, then is that the first step along the road we should never travel again? I don’t know, but I pray that we will learn from our mistakes.