When I decided to publish my first novel, way back in 2015, I sent the manuscript to a selection of publishers, and sat back to await their offers. Ah, would that I could return to those days of naivety…The sad fact is, people today do not want to pay much to read a book, they want cut-price bargains, special ‘two-for-one’ deals…or to read it for free as an ebook. This means that to cover the cost of editing, and type-setting, and cover photos and printing, publishers have to select their books very carefully. They then have to set a price which will cover their costs, even when the wholesaler has demanded a 65% discount, and bookshops have taken their 35% share…never mind that the publisher might want to eat occasionally.

Hence the sad situation we are in today, where publishers generally only publish books from known authors—people who are practically guaranteed to sell enough books to cover their costs. Which means that new authors find it almost impossible to find someone to publish their work. If anyone asks me how they should best set about ‘being a writer’, I would tell them to find a career either with a publishing agent, or in marketing. I find it telling that one of the latest best-sellers was written by someone with a career in online marketing—these are the people who publishers will be interested in.

However, I couldn’t be bothered at my age to start a whole new career, so I decided to self-publish my books—publishing Hidden Faces in 2016—which has now sold over 500 copies. (There is a section outlining costs under the ‘How to’ section of this blog.) I would though, very much like to be traditionally published, and recently, I thought it might be possible…

I finished writing Ploughing Through Rainbows in November 2018, and began to send it out to publishers (see yesterday’s blog for an insight into my state of mind!) However, I also sent it to someone else. A couple of years ago, a bookseller had been lent a copy of Hidden Faces, and she liked it sufficiently to send me an email, and also to order 40 copies for her bookshop. I decided to send her the manuscript of Ploughing Through Rainbows, in case she had any contacts within the publishing world who might be interested.

This led to the manuscript being read by a publisher, who sent me a 4-page critique, suggesting changes. I rewrote the book, and waited.

Several months later, the publisher replied, saying that due to the reduced market, they now ask the author to buy 500 of the books, at half-price, to help cover costs. This was somewhat of a shame, as one thing I hate about self-publishing is the number of books under my stairs!

However, the thought of being traditionally published was still enticing, so I asked for more details. I also did some research, and found that several smaller publishers ask the author to buy a certain number of books, usually at half-price. I sent a list of questions to the publisher, asking what the actual cost to myself would be, and what the print-run was likely to be (so I could see if he would actually extend the reach of my book). I also asked for the title of a book comparable to mine, so I could check the quality. I then ordered a copy from Amazon.

The price quoted was disappointing, as it was half the RRP of £12.99. Now, I know how this works, because do the same with my self-published books. If you sell through wholesalers and bookshops, they want a 65% discount, so in order to cover your costs, you set the price at about £13. However, when selling in person to customers, the actual selling price is usually nearer to £9. I was therefore expecting the price to me to be half of £8.99, not the recommended retail price.

The book arrived. Although it was published by the publisher, it was an Amazon Kindle book—like my travel book (The Sarcastic Mother’s Holiday Diary). To print a paperback Kindle book, you do not have to pay for them to be printed, nor do you have to order a specific number upfront—you could publish a book and buy just one copy. This left me rather bemused as to why I was being asked to pay such a large cost upfront—even given the editing/type-setting/cover costs, this still seemed unreasonable. Perhaps only the books sold through Amazon were printed by Amazon? Perhaps those ordered directly were printed traditionally? I ordered a second copy, via the publisher’s own website.

The second book arrived. Although it did not say it was printed by Amazon, it was the same quality. When I self-publish, my books are printed with pages in multiples of 16, so the paper is folded before glued to the spine, which makes for a lighter, more robust book. The Amazon books are good quality, they use a decent paper and a thick enough cover—but they are not as nice as books which have been printed traditionally. Nor do they cost as much. The type-setting was also disappointing, with Chapter One starting on page 5 (it’s a fiddle, and involves much swearing when I do it, but it is possible to add section-breaks to the manuscript, so that the title page and copyright pages are not part of the numbered pages). In my opinion, Chapter One should begin on page one.

I was now thoroughly fed-up. Not only was the publisher asking me to pay half the RRP of £12.99 for 500 copies, but the books were no better than those ordered individually through Amazon. I might decide to publish through Amazon—it is a good system—and it won’t cost me £3,000 upfront.

I have decided, with a heavy heart, to self-publish Ploughing Through Rainbows. It’s a good book—set on a farm, it shows the life of a family, exploring a few juicy issues along the way. I know it’s a good book. I know people will enjoy reading it. It will hopefully be available soon…

Tomorrow I will tell you what I have learnt about cover design, and which covers help to sell books. Why not sign up to follow my blog so you don’t miss it? 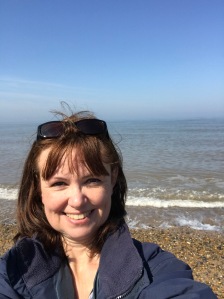 Anne E Thompson has written several novels, which are available from bookshops and Amazon.
Anne also writes a weekly blog — describing her travels, her animals, and life in general — Why not sign up to follow her blog today?
anneethompson.com

One thought on “Finding a Publisher…”