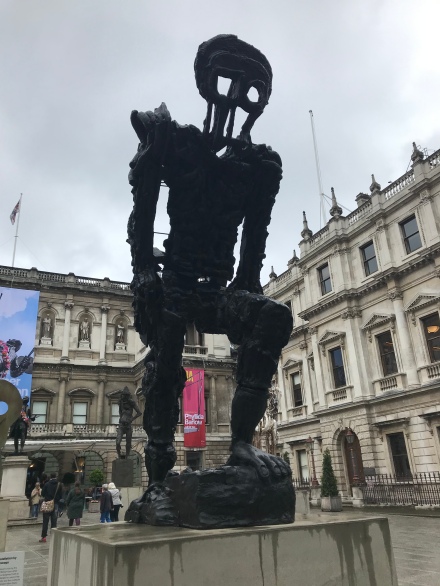 One thing I miss, now my children are all grown up, are the school concerts and choirs—well the ones from when they were older anyway (I do not, even slightly, miss the cello concerts of 5 year olds, when I spent an hour hearing all my favourite songs being massacred). So, when Bea suggested I might like to go up to the Royal Academy to hear her work-choir sing, I was excited to attend. 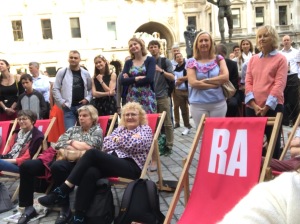 It was a lovely sunny evening, and Bea managed to find me a seat right at the front, and someone kindly bought me a glass of white wine, so things were pretty perfect from the start. We sat in the courtyard of the Royal Academy (beneath what look like giant zombies, but we’ll brush over that weirdness). The evening was a variety of choirs, from a variety of workplaces, who took it in turns to sing 3 songs each. There were choirs from UBS, and Channel 4, and The Telegraph, and a London council, amongst others. Apparently, there are musical people, who go around, and teach choirs at all these businesses. Now that must be a fun job!

It was unusual to be watching amateurs sing—usually I am either watching children, or professionals. These people fell into two categories. There were those who were happy performing, and they focussed on the music, moving slightly as they sang, making eye-contact, and smiling. Then there were the others, those who clearly were not too excited at the thought of singing in public. I guess that they loved singing, but going to choir practise after work and singing with your work colleagues, is very different to then performing to a whole bunch of people who you don’t know. They looked distinctly worried—they stared at the conductor the entire time, and stood as still as statues, while singing. They also, where possible, huddled at the back. I decided that I had a lot of respect for these people, it is very brave to sing in public. 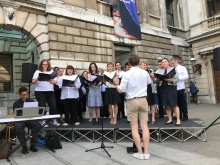 The choirs wore a variety of clothes. The UBS choir had tried to coordinate outfits, with most people managing to wear black and white, though the odd individual managed to sort of keep to the rule but still look different (reminded me of school days again). Other choirs were completely random.

There were three different people who conducted. They were incredibly enthusiastic, and tended to have very wiggly bottoms, which gave you something to watch if you were bored. They were accompanied by a brilliant pianist on a keyboard, who even managed to continue playing when all his music blew away.

Another bit of added entertainment were the children. There was the little boy on his Dad’s lap, who was obviously watching his Mum and who sang every song along with the choir (and his Mum was easy to spot, because she basically sang directly to him the whole time, which I found very touching). Then there was the three-year-old who I’m guessing recently started ballet, who found a space at the front and treated us all to a wonderful impromptu dance, as lost in her own world, she responded to the singing. There was also a toddler, who was quite determined that he was going to get onto the stage, and was almost crushed several times when he stood behind the wiggly-bottomed conductor (always fun to see other people not managing to control their children properly). 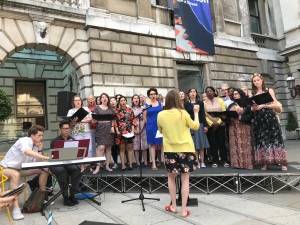 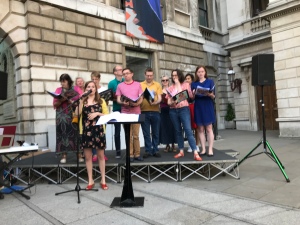 An unwelcome distraction, which annoyed me intensely, were the two women who stood right at the front (next to me) and then had a chat in very loud voices. I was itching to complain, but knew my family would be cross with me, so I photographed them instead. (But have since decided that I should not put the picture on here, as it’s easy to make enemies, and harder to repair damage afterwards—but they were very rude.)

Son 2 and Husband met us after work, and we all had dinner before coming home. What a lovely evening.

I hope you have some nice treats this week too. 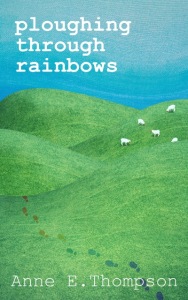 If you enjoy reading about families, you will love my new book, Ploughing Through Rainbows—why not buy a copy? Set on a farm, it’s full of humour, but also shows the tensions that arise when adult sons make unexpected choices. Susan and Tom raise beef cattle, and have to cope when one son decides to be vegetarian. Another son gets into debt, and then Ben, the youngest, tells them that he is gay…

It’s available from Amazon,  link below: 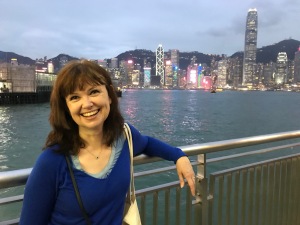