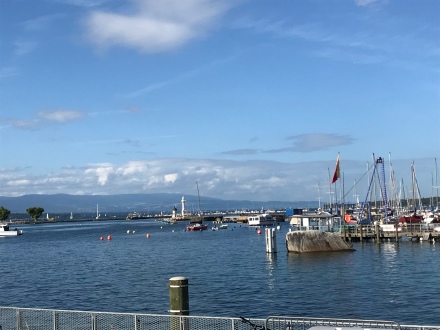 We are all together for our family holiday, despite the best efforts of both British Rail who ground to a halt due to a power-cut, and the British weather which soaked everyone returning from work in London the evening before we flew. The taxi arrived at 5:45, we were all ready (something of a miracle with my family) and off we set for Heathrow.

Arrived at Heathrow and checked in. Breakfast in fancy restaurant (family enjoy spending Husband’s money) then went to gate. Flight delayed because they couldn’t find the pilot (seriously, this is what they told us—unexpectedly honest of them). Buses appeared and we worried a bus-replacement service was being offered, but they took us to a plane, so all was going well.

Arrived in Geneve about 2pm. So did our baggage, despite the best efforts of Jay who had cleverly left his luggage labels from a previous holiday attached to his bag. We found a taxi big enough to carry five people plus bags and went to Intercontinental Hotel. Paid taxi a year’s salary, plus money for carrying our bags (this is a thing, apparently). Checked into rooms.

Our room is wonderful, with a view across Geneva towards the river. It also has a Nespresso machine, and I am rather partial to Nespresso machines (whilst never wanting to own one, because then it won’t be a treat).

We were given free bus passes at the hotel, which I believe is available at all hotels, and covers travel around most of the city. We caught the number 5 bus, and went to the city. We saw a big old clock, walked next to a river, and saw the lake, which is lovely. 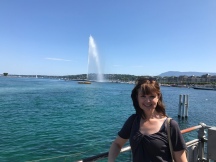 In the lake is a sort of fountain, which is not particularly pretty but is very big and is a feature of Geneva (in case, like me, you didn’t know—though I am told by my family that actually, everyone in the world apart from me, knows this). Anyway, the fountain/jet was originally something to do with hydro power in a clock-making factory, but the high pressure needed to be released, so once every day, they would send a jet of water into the air. This gradually became a tourist attraction, and then a feature of Geneva, so now it’s there permanently. Except, sometimes, it isn’t.

We found a big park, with a big fountain, which was pretty. It had a chubby Chinese boy playing in it while his mother shouted at him. Geneva does fountains rather well—there are lots of them. There are also lots of Chinese tourists, and we found another million of them posing in front of the flower clock, which is another feature of Geneva. It is a big clock, made out of flowers (you could have guessed that really, I expect). 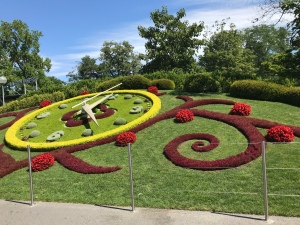 We looked at a few restaurants but they were all very expensive. Geneva is expensive. It is even more expensive than Milan, which until now I had thought was the most expensive city in the world. We ate dinner in Vapiano, which apparently is a chain and very well-known (I had never heard of it). It was very nice, and you could stand and watch while they cooked your food (pasta dishes). I had a very nice ricotta ravioli with garlic and chilli sauce, all ordered in my very bad French. It was rather fun. 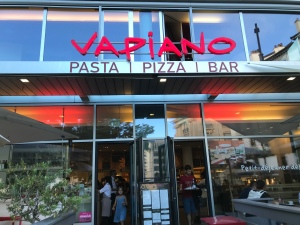 Caught a bus back to the hotel, and glimpsed fountains and a giant chair as we passed the United Nations building—something to visit another day. Went to bed exhausted but happy. Geneva seems like a nice city, even if everything is hideously expensive. It is very clean, and safe, but I’m not yet sure whether it is friendly. I will tell you more tomorrow.

Hope you have a nice day.

If you enjoyed this, why not buy a copy of The Sarcastic Mother’s Holiday Diary? An interesting holiday diary which will make you smile, a great book to relax with.

Funny stories about travel with a family.