If you travel to London at the moment, there are several huge billboards advertising The Girl on the Train. The book has morphed into a film, and now a play. Now, I have read the book, and it was very enjoyable, but the writing style is not, in my opinion, very different to my own (Paula Hawkins even has the same errors as me, and tends to write ‘that’ too many times). Other than acknowledging that her book is way more successful than mine, it doesn’t cause me any angst. Nor do the books which are fairly well-known, published commercially, and hugely popular, written in a style which frankly I cannot read, because they are so full of drivel. No, the books which cause me a problem, which make me wonder if I should just give up and make hats or something, are the books which are excellent. 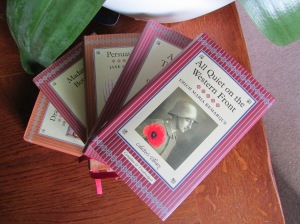 The problem, I think, for an author, is when other people write better than you do.

If you are an author, or writer, or whatever it is that you wish to call yourself, then you cannot help but compare yourself to other people. Let’s be honest, there is a wealth of literature out there, from excellent contemporary fiction, to way back when Jonathan Swift wrote Gulliver’s Travels (now that was a very clever book). And for most of us, if we are honest, our own writing does not compare very well.

Now, when I first began writing, this was something of a problem. I love writing, I always have, but letting other people read what I write was another matter altogether. Writing was private, for fun, not for sharing. The potential for public humiliation is immense—what if other people don’t like your writing? When I read the books I love, from Charlotte Bronté to John le Carré, I am aware that my own offerings are not in the same class. For decades, this meant that my work remained hidden away, never read.

Then, one day, in a moment of madness, I showed one of my books (which was scribbled on the back of Ocado receipts) to my husband. He’s not the sort of husband who gives away compliments freely, and yet, wonder of wonders, he actually liked my writing, and told me that he hadn’t realised that I “could write like that.”

In 2016, I published my first book. This took scary to a whole new level; now complete strangers were going to be reading my work—even worse, people who knew me would read it. I sold some copies, and waited (not quite hiding under the bed, but wanting to). To my amazement and relief, people were nice. I was sent letters from friends, and emails from strangers, who had enjoyed Hidden Faces, asking if there was a sequel.

People read my books, and told me that they: “Read a chapter every night, and so look forward to it that I find I go to bed early just so I can read more,” or “I became so engrossed in Joanna’s actions, she was such a complex character, I didn’t want the story to end,” and, “Reading Clara was like watching a car crash, I knew that I should look away, but I was fascinated, and half of me wanted her to succeed…” I grew braver.

Here’s the thing, I know that my books are still inferior to those by authors that I love to read. I guess it is similar to an artist, who loves to paint, and who creates some very pleasing watercolours, but who knows that their work does not even begin to compare to Van Gogh. They also know that their work is improving and evolving and that other people enjoy it enough to pay for it. Should they stop painting? No, I think they should definitely continue. Do you sometimes feel your own work isn’t good enough? Then improve it—but don’t stop writing!

Personally, I feel that my writing is like orange squash. There is nothing wrong with orange squash, and it’s a lot better than the vinegar that some people produce. In fact, on a hot summer’s day, a long cool drink of orange squash is exactly what you feel like, and is incredibly pleasing. However, it’s not red wine, it cannot pretend to be red wine, and no one is going to think that it is. When I read a certain phrase by John la Carré (my current favourite author) it is like sipping a beautiful red wine, I want to sip it, savour it; I read it several times. I cannot produce that, but that’s okay; there is definitely a place for orange squash, and who knows? Maybe one day, if I keep working hard, I too might produce something of a decent vintage. One day…

As I said, my writing is definitely improving (because people tell me so!) Have you read my latest novel? A heartwarming story, set on a farm, it contains a lot of my family’s humour and some poignant moments. Why not buy a copy today?

Ploughing Through Rainbows by Anne E. Thompson. Available from Amazon.

One thought on “When other people write better than you do…”