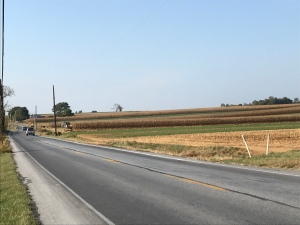 We drove from New Jersey to Lancaster, Pennsylvania, via The King of Prussia service station. I’m not sure where the name came from, but it’s misleading—it was just a regular, slightly dirty, over-used, service station. We bought bagels and cream cheese. The cream cheese came in a long foil tube and you add it yourself, which I like because you need a fraction of what is provided. We smeared it onto our bagels with the plastic knives provided. America has lots of plastic knives. And plastic plates. And plastic cups. Most places are not big on cutlery and crockery that can be washed and reused.

We parked in Lancaster, and walked to Central Market (mainly because the guidebook told us to). We wandered round aimlessly for a while, looking at the Amish and Mennonite people wearing unusual clothes and selling their produce, and then we decided that we’re not very keen on big towns and cities and people being interesting because they are different—so we left.

The countryside would be more interesting, we decided, and planned a route through agricultural land towards Philadelphia. We saw fields being ploughed by teams of oxen, and pretty houses with window-boxes and pumpkins, and long roads that stretched into the distance. You can breathe in the countryside.

We decided to stop in Intercourse, as I fancied buying a quilted cushion-cover for my collection. There were several shops selling quilts and quilt-related stuff. Some were more touristy than others, all were expensive, but I managed to find a very pretty cover. I also bought a fridge magnet, showing an Amish horse and buggy (they don’t drive cars—in case you don’t know—the Amish people are a sect of people who have decided to shun the modern world and modern inventions, such as cars. And buttons, for some reason. Though not money—they were happy to take our money). By the way, I have absolutely no idea who named the town, or why.

We were staying in a Fairfield Inn by Marriot (the first of many). As we zoomed along the motorway, the Satnav told us we had ‘arrived at your destination’ which worried me slightly. The hotel, and adjoining road was clearly a new build, so Satnav was not far off. The hotel was on a hill, looking down on several major roads. However, the double-glazing did its job, and the inside was quiet and comfortable. Husband looked at local places to eat and asked if I would mind walking to a nearby bar/restaurant for food. There was a hint of something in his voice, so I asked for more details before agreeing.

The distance was short. It wasn’t due to rain. Some of the route had paths.

I asked a follow-up question and was told that a tiny part of the walk was along a major road. (Major as in, 6 lanes.) Plus, as it crossed a bridge, a teeny section would involve running along the actual carriageway as there was no hard-shoulder.

We drove to the restaurant. It was okay.

We planned our day in Philadelphia, and decided what we wanted to see. But that’s for my next blog.

Have a safe day, and don’t walk along any motorways.

Travel with a family…always unexpected.

One thought on “Intercourse (the town)”