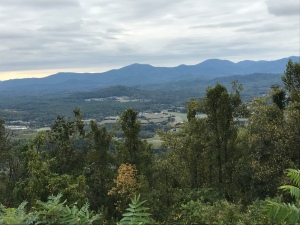 We left Philadelphia and made our way to the Blue Ridge Parkway, starting at the Visitor Centre, where a helpful woman gave us a map and some suggestions, and I bought a fridge magnet. Then we set off.

The Parkway is basically a road that runs across the top of the Blue Ridge Mountains. Most of the time the road (hundreds of miles of it) is surrounded on both sides by trees. We were there just as they were beginning to turn for autumn—they would have been spectacular a week later! Then the trees part, and you glimpse valleys, on both sides, stretching away from you, full of miniature towns and farms and forests.

There are stopping places, and the map recommended short walks, where we passed disused railway lines, and lakes, and views across the valley. I couldn’t quite reconcile the National Park signs with the rifles that decorated them. But then I am British, hunting with rifles is not something we tend to do very often.

A webworm cocoon. They were huge!

In the trees, there were giant cobwebs—like something from a horror film, silken threads binding giant prey. I later learned that actually they are cocoons, made by webworms, and they neither kill massive prey nor damage the trees.

The road was relatively empty, we saw the occasional car or motorbike, but mostly it was just us and mile after mile of trees. It was very relaxing—easy for Husband to drive (no stop-lights) and a chance for me to shut my eyes and nap.

We ate bagels for lunch, and left the Parkway mid-afternoon for coffee and donuts. That is the wonderful thing about America: Husband says he fancies coffee and a donut, I do a quick search on Google Maps, 30 minutes later we’re in a Dunkin Donuts!

After a while, we drove through the plains on the ridge—flat areas of fields, with cows and the odd farm building, but still at the top of the mountain range.

We spent the first night in a Fairfield Inn in Wytheville. The following morning when we ran, we could see the Smokey Mountains in the distance, covered with shifting clouds. We ran along a residential street, with painted wooden houses that had autumnal displays of pumpkins and flowers decorating their steps. The air was cool and crisp, and the streets were deserted.

After breakfast, as it was Sunday, I found a church online, and we visited Sunny Hills Church in Wytheville. It was a modern hall, set back from the road (everyone owns so much land in this country!) with a duck pond (good start). We were offered coffee and donuts when we arrived, and everyone was very friendly.

After church we bought more bagels, and wound our way back to the Parkway to continue our drive south. It was a foggy day, so there was less view, but it was so much more pleasant than a motorway.

Bagels are a staple food here. There is plenty of choice, and each can be filled with a variety of tasty fillings. Easy to be fat in America.

All along the Parkway are regular stopping areas, with bins and washrooms. Our lunch stop had signs warning about the bears, and bear-proof bins (which Husband also found to be bit of a challenge!) We didn’t actually see any bears, despite straining my eyes to see into the trees. In fact, the most interesting wild-life we saw was the road kill! We saw squashed armadillos, and racoons and chipmunks.

As we drew near to Asheville, the Parkway passed through some stone tunnels, which were rather spooky in the mist. There were still very few other cars.

We stayed in Asheville for our last night on the Blue Ridge Parkway. Dinner was at Cornerstone Diner, which was pretty perfect. We asked about bears, and were told that they hardly ever attack people (which was not quite what I was hoping to hear). The following morning when we left for our run, there were lots of ‘Beware of the Bears’ signs up on the doors of the hotel. We ran, nervously, along a residential road around a lake. It was very near to the hotel, and the motorways, but it felt like a country park. There were trees and houses and quiet roads. I have noticed this about America, they tend to have very concentrated areas of housing, or shops, or offices—but they are separate. In England a street might have a mix of houses and shops, with an office or two muddled in somewhere.

We did not get eaten by a bear, and continued our drive to Nashville. Nashville was amazing! I will tell you about it in my next blog. The Blue Ridge Parkway was a nice interlude during our long drive, and helped to remind us of the vastness that is America. Have a good day, and take care (especially if there are bears!)

One thought on “The Blue Ridge Parkway”