For my birthday, one of my gifts was a voucher to visit a gin distillery and learn about gin. (I am choosing my words carefully here, I’ll tell you why in a minute.) I am rather fond of gin, though I have to confess that despite the rows of exciting gins offered by pubs and restaurants and bars, I actually prefer the cheaper brands—my gin of choice is probably Gordon’s or Beefeater. But I’m sure the ‘bespoke’ gins are very nice too.

We set off, Husband and I, clutching my vouchers and trying to find the distillery using Satnav. The Distillery—Greensands Ridge Distillery—had sent a map, saying that it wasn’t very easy to find. It wasn’t, but we managed. It was harder to find the correct entrance, as it was unmarked and a tiny door cut into a huge coach house door. But we managed that too.

The Greensands Ridge Distillery is a small industry, set up in an old stables and coach house. We were welcomed into a large room surrounded by barrels and fancy-looking copper equipment, and offered tea and coffee. It was very good coffee, though it felt wrong to be drinking coffee when surrounded by stills and urns and delicious smells. The owner, Will, then gave us a short talk about gin, and gave us a small plastic thimble of Raspberry Ghost, which tasted like a fruity brandy (which I didn’t much like). We learned that distilling produces a clear liquid, leaving all the sugar and colour and proteins behind. I remember this from chemistry lessons at school.

There were four couples at the event, and each couple was provided with a small copper still, which were Moorish in shape and originated from Portugal. Many fruits and flowers have oils which historically, people wanted to use—for perfume or medicine—but they don’t dissolve in water, so people began to distil alcohol to dissolve the oils. They realised that when juniper berries were added, the result tasted rather nice, and hence we have gin. Juniper berries cannot be fermented, so the only way to extract their flavour is to dissolve them in alcohol. Here’s the thing: gin isn’t really a thing! I always thought that gin was like vodka, or wine, or brandy, or rum, that something was fermented to produce it, but it’s not. There isn’t something which is fermented to produce gin, any alcohol can be used. The process which turns the alcohol into gin (any old alcohol, as long as it’s agricultural alcohol, you can’t use ether or surgical spirit!) is the adding of juniper berries. The alcohol must be very pure: 96%, so it has no taste at all. (I don’t know this from experience, I decided to believe the man.) So, Vodka with juniper berries added, either by leaving them in there—infusion, or by distilling them, results in gin. Different distilleries add different ingredients, so the taste is slightly different, but basically, juniper + alcohol = gin 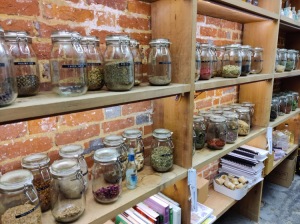 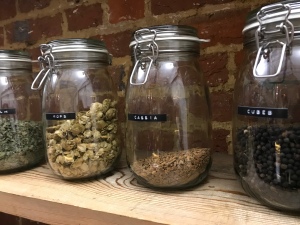 We then were introduced to glass jars of flavours. We went along the shelf, smelling various herbs and spices and plants, and deciding which ones we liked. We were advised on quantities, and how to ensure balance of flavour, and then we weighed them into our little stills, added juniper and alcohol and water, and turned on the heat. Gradually we felt the copper urns warm up, we watched the temperature gauge rise, and turned on the water tap so the steam pipe was cooled, the vapour condensed, and gin dripped into our collecting jars. It was strangely exciting!

We had spoons, so could taste the gin as it dripped out. As the different flavours vapourise at different temperatures, the taste changed as the heat went up.

We were given a rather delicious gin and tonic to drink while we waited. We also learned that due to the purity of the process, larger distilleries actually produce better gins than the small bespoke distilleries—so my preference for cheaper, mass-produced gins was not so weird after all. The purest gins are ‘London Gin’ because they don’t have any flavours added after distilling. Both Gordon’s and Beefeater are London gins.

To make my gin, I added: lemon and orange peel, frankincense, cassia, nutmeg, goji berries, sarsaparilla (which has a vanilla smell) cacao nibs (chocolate!) and of course, lots of juniper berries (otherwise it wouldn’t be gin). I started to write down the recipe, with quantities, but Will (the owner) stopped me, and asked what I was doing. I told him I wanted to write about my experience for my blog—to tell you all about it. Will made a funny expression. He then explained that to make gin, to own a distillery and the equipment we had used, requires a license. He has a license, and this means he could let us use the equipment and make a bottle of gin. But he could not be seen to be teaching us how to make gin ourselves. We could not then go home and produce our own. This would be illegal. Before we could remove the bottles from the premises, they had to be tested for alcohol content, and the bottle clearly labelled, saying what it contained. We also had to have a sticker, showing everything was properly licensed, and the tax paid. (£8.05 duty on a 700ml bottle of gin.) Generally, I’m not a great one for rules, but I rather liked my ‘gin experience’ and I don’t want to cause trouble for Will, so I’m afraid the exact details will have to remain a secret. I could tell you, but then I would have to kill you. Or of course, you could simply visit the distillery yourself! It makes a very nice (if rather expensive) gift for someone you love. (www.greensanddistillery.com) 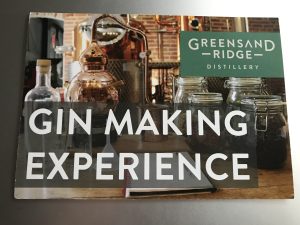 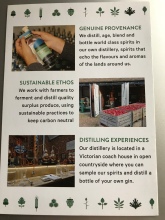 Thanks for reading. I hope you have some lovely drinks this week.

One thought on “Gin isn’t a thing. Fact.”