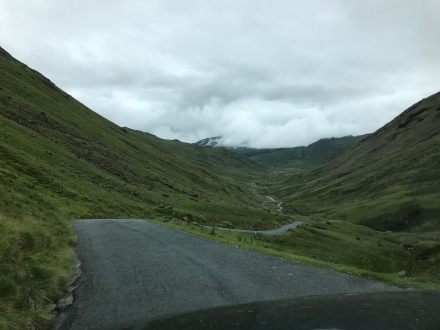 Family Holiday in the Lake District

Driving Through the Steepest Pass in England

We set off for a drive through Hardknott Pass, which is the steepest road in England. The pass goes between Eskdale and the Duddon Valley. It was originally built by the Romans, but then, like so much clever stuff built by the Romans, it was left to disintegrate. There was lots of talk about repairing the route and making it a proper road (I am sensing committees) but nothing happened. The pass was suitable for donkeys, and not much more.

Then, during World War Two, the area was used for tank training. The tanks pretty much decimated the pony track. After the war, the damage was repaired, and tarmac laid, and it became a ‘proper’ road.

We set off, excited to drive along a pass the had a camber of 1 in 3, and promised beautiful views. We passed Scafell Pike, which is the tallest mountain in England.

The pass was beautiful, but I was glad to be in a four-wheel drive, and especially glad that I wasn’t driving. The road was single track, with passing places, and it meandered down to the valley, with hair-pin bends and steep, steep slopes. I don’t expect many local people use the pass, and it has become a tourist spot—and you could tell which tourists were more used to wide roads and driving on the right by their terrified faces!

At one point we came down a slope to see a stationary car facing a small herd of cows. The cows were staring at the car with interest, and seemed especially pleased when the driver honked the horn. They were not planning on going anywhere. The cows were beautiful, a mix of ages—some looked only a few weeks old, others were full-grown, including at least one very large bull. They had long shaggy coats, and were clearly interested by the car hooting at them, but looked docile. We arrived on the other side of the herd. They were not moving. I am used to cows (spent two years researching different herds before writing Ploughing Through Rainbows and Sowing Promises) and they didn’t look aggressive, so I got out of the car and sort of swooshed them back onto the verge. The pale-faced man in the other car drove through the gap looking terrified (I wonder how many days he had been waiting there for). We waited until he had passed, and then continued on our way. As we drove, the herd wandered back onto the road, like the Red Sea closing behind the Israelites, waiting for the next driver to sit and honk at them.

Helpful signs at the Roman fort.

We stopped at Hardknott Roman Fort. This is a wonderful location, surrounded by mountains, looking down into the valley. The remains of the walls were still there (some rebuilt, I think) and there were helpful signs explaining what the buildings had been in Roman times. However, the best bit was the view, and the sheep—who wandered over the remains and settled into sheltered corners to sleep. The sheep here are wonderful, they mostly have grey wool, and each ewe has one black lamb with the sweetest white face you have ever seen. 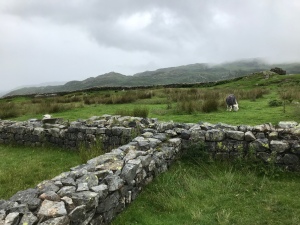 Sheep nestle amongst the remains of the fort.

We finished the drive at Wast Water. In the past, this has been voted the prettiest place in England, and it’s not hard to see why. It is perfect. There are mountains of scree (2,000 feet high) on one side, and the opposite bank has little gravel beaches, and tiny islands you can wade to, and sheep-nibbled grass, reeds, marshes, and the standard lumps of granite standing tall. I found a lump of granite to sit and write on, while family members strolled (noisily) round the lake, or waded to an island.

We returned to the car, Jay emptied all the water out of his wellies (so much I am not writing here) and we drove back to the cottage.

Sausage and chips for dinner, then we played games (loudly) until bedtime. Another happy day in the Lake District.

I hope you have a happy day too. Thanks for reading.
Take care.
Love, Anne x